Inspired by Chris Gibson's excellent book Vulcan's Hammer, and to tie in with the imminent publication of his follow on to that work, Battle Flight, I decided to try my hand at modelling the Sea Dart armed Air Defence variant of the venerable Avro Vulcan bomber.

The boring history bit. (Paraphrased from the details in Vulcan's Hammer)

In 1976 the RAF was looking for a counter to the threat presented to Atlantic convoys by the Russian combination of the Backfire bomber and Foxbat fighter. Primary need was the ability to carry out head on interceptions against the Mach 3 capable Foxbats, and to intercept the Backfires before they could get into firing position with their long range stand off anti ship cruise missiles. With budgets being tight, an off the shelf solution would be ideal, as there was little money available to develop a system from scratch, with the Tornado and Nimrod AEW using up much of the available R&D budget.

Attention turned to the Royal Navy's ramjet propelled Sea Dart SAM system, as this had both the necessary range, and speed to deal with both anticipated enemy threat systems. However, the Type 909 radar used to search for targets to fire the Sea Darts at, and to guide them to said targets once launched, required an 8 foot diameter Cassegrain antenna, not exactly an easy thing to package into an aircraft, especially a traditionally fighter sized aircraft. There was also the quite considerable electrical power generating requirements to operate a radar of the Type 909's size and capabilities to keep under consideration...

The only aircraft at the time that had radar antenna of comparable size and power, was the Nimrod AEWand it's FASS scanners, and that was only just entering development. One option however, that was available, and could conceivably carry the necessary radar, missiles and power generating systems, was the Avro Vulcan. The Vulcan fleet was being drawn down, so airframes would be available to convert to an Air Defence role.

Modifications required to suit the Vulcan to this role included fitting a new 6ft radar antenna in a new radome replacing the entire nose forward of the cockpit. This Sea Dart illuminator antenna would provide the power to guide a Sea Dart on to a target up to 60nm away. Finding the targets required a seperate search and tracking radar, housed within a tear drop shaped nacelle mounted ventrally on the centreline of the new nose section. The nose section was blunter and 3ft 6in shorter than the standard Vulcan radome.

Ten Sea Dart missiles were carried under the wings of the new variant, with double rails at stations 252 and 350, and a single rail at station 446. The entire system was capable of intercepting a high speed target like Foxbat at ranges in excess of 60nm and altitudes of over 80,000ft. All the changes made to the basic airframe, and the need to carry two radars, made the combination both complex and drag inducing. There was a substantial weight penalty to carrying the Sea Darts, plus a lot of drag cuased by carrying ten missiles under the wings.

Ultimately, the ADV Vulcan studies came to naught, and the RAF developed the ADV Tornado as the Tornado F.3

The model so far:

The basis for this build is ye olde 1/72 scale Airfix Avro Vulcan kit, a bit long in the tooth now, but the only game in town if one wants a 1/72 Vulcan. The basic kit has had additional details added using the various aftermarket detailing sets that are available. To name a few, the Wolfpack seamless intake set, and the Wolfpack undercarriage bay set and replacement resin flaps. I did originally plan to use a brass cockpit detailing set, but decided against it. I also originally planned to depict this with deployed airbrakes, and even went as far as opening up the bay areas in the base kit, but then had a change of heart and had to fill the resulting holes...(memo to self: make your mind up before committing to cutting a kit up!).

The kit had its original nose cut off with a razor saw, and the kit was then assembled using a combination of the base kit instructions and the various detailing set instructions (some of which were rather vague about parts placement). Once assembled, a new nose was created using plasticard templates in plan and profile, that were attached to a circular plasticard bulhead. This assembly was then arttached to the fuselage. I then built up the nose using off cuts from the original nose section, and lots of milliput putty, sanded to the correct shape over multiple sanding sessions...cue repetitive strain injury claim...and a raised share price for the manufacturers of primer, putty and sanding paper...

Bottoms up! The underside of the build, the white "splodges" in the pics are areas that have just had putty applied to them, an application of Halfords automotive primer revealed some minor surface defects that require further filling and sanding...so back to the sandpaper we go! I cut off the ventral bomb aimer's blister in the kit (as the ADV Vulcan did not have a bomb aimer's station), and filled the resultant gap with a combination of plasticard and milliput, and once again lots of sanding ensued...

My ventral radar pod. The same technique as used for the new radome was applied here, plasticard templates in plan and profile, with the addition of cross sections at regular intervals, the whole was then built up using sprue off cuts and putty...and you guessed it...more sanding...YAY! The pylon that attaches this to the airframe was made from laminated plasticard, sanded to the correct aerofoil cross section, it's in the Vulcan kit box, along with the similarly created missile pylons, I'm just too lazy to dig them out right now to photograph them!

The resin 1/72 scale Sea Dart, purchased from Fleetscale, they do sets of two for £3.00 a set, these saved me from having to scratchbuild a Sea Dart master, then casting copies thereof...phew! These will now be cleaned up ready to paint.

There is still much work to be done, as a number of defects require rectification, but I am hopeful that I can have this ready to paint by next weekend at latest, the model will be in the standard 80's Air Defence scheme of Barley Grey and Light Aircraft Grey, and finished in the markings of 23 Sqdn RAF using the Xtradecal 23 Sqdn decal sheet, with additional stencils taken from the Model Alliance Nimrod sheet.

I would like to extend my thanks to Chris Gibson, for kindly supplying me with high res versions of the Vulcan ADV drawings in Vulcan's Hammer and to my friend Geoff Baker for helping me to determine a build method for the scratchbuilt sections, as well as advising me on possible candiate squadrons to use for this build's markings.

Why didn't they just look at fitting the AWG-9/Phoenix/IRST to it?
O

sferrin said:
Why didn't they just look at fitting the AWG-9/Phoenix/IRST to it?
Click to expand...

Mounting the AWG-9 in the Vulcan was one option actively considered, along with the AIM-54.

I chose to model the combination as above, as the changes are more readily visible. The Phoenix armed Vulcan would have been externally unaltered in appearance, the only cue to a change in role being the underwing carriage of 12 Phoenix missiles.

THIS VERSION LOOKS COOLER! B)

Looking good so far, the blunter nose looks like you got the shape just right. Considering what the kit is like those days spent rescribing the raised panel lines have paid off and with the aftermarket Wheel bays it certainly looks alot better than the standard kit.

Interesting, I'm looking forward to seeing this one finished.

The Sea Dart looks a bit odd; the 'panel lines' around the body are way too deep, and the nose is off: the antennas should be faired into the body, the intake bullet should be sharper, the nose section is conical. 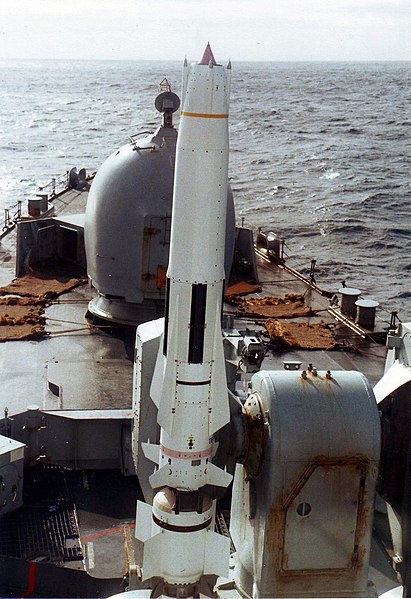 Hobbes said:
The Sea Dart looks a bit odd; the 'panel lines' around the body are way too deep, and the nose is off: the antennas should be faired into the body, the intake bullet should be sharper, the nose section is conical.
Click to expand...

The photo of the resin missile doesn't really do the shape justice, it does have a conical nose. Yes the aerials look a bit off, but frankly, I have no desire to do anything about it. I may see about doing a scratchbuilt Sea Dart at a later date, and casting copies to replace these, but for now they will do. As for the heavy panel lines, I agree...but I'm a modeller like yourself and not afraid of putty and sandpaper.

(I've got a bunch of photos of the Sea Dart at the Bristol aero collection if you need detail shots)
Click to expand...

This proposal specifically does NOT use the CF.299 variant of the Sea Dart, that concept was cancelled in 1963, this proposal was from 1976, and the aim was to use an off the shelf missile, thus straight forward Sea Darts, as indicated in the relevant text in Vulcan's Hammer and verified by discussion with the people at Avro Heritage. The CF.299's depicted in Adrian Mann's CGI render on the Battle Flight thread are artistic licence on his part.

I may well take up the photo offer Harro, when I get round to making replacement Sea Darts.

Yup that's all photobucket is good for now.
A

And my opinion of them...

And my opinion of them...

Apropos, because the video is also unavailable.
A

I can see it clearly, no problem on my side. Smells like censorship of crude words songs...