A number of naval SHOrt Range Air Defence Systems have been proposed over the years. 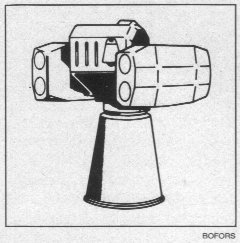 Featured in the "World Naval Developments" section of the December 1986 USNI Proceedings:

The article notes the threat from light aircraft being used in a Kamikaze attack, which might fly too slow to be engaged by more advanced systems and which where authorisation to fire would only be given at the last moment.

IIRC a navalised RBS-70 has been proposed in a couple of different forms, but the only use of the weapon has been in the conventional tripod-mounted form.

Wasn't there also a proposal a few years back for a naval turret/platform that would launch the Starstreak?

vajt said:
Wasn't there also a proposal a few years back for a naval turret/platform that would launch the Starstreak?

From what i've read, the argument against that kind of mounting is that the turret doesn't rotate fast enough for a quick reaction SAM. 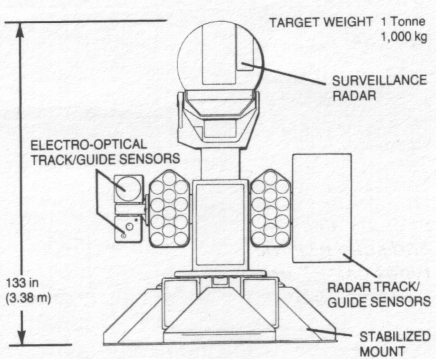 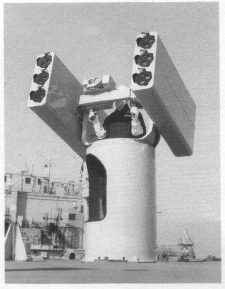 • For Starburst and Starstreak missiles
• Data for Starburst version:
- Range of 4Km
- Turret is 1980mm high with a swept radius of 1270mm
- Power assisted azimuth and elevation drives
- Fire control includes thermal imaging and tracking sensor
- On alert the aimer slews the mounting to the indicated bearing and finds the targets with the IR system
- Automatic tracking then used with laser command link to missile

Both these were presented at RNEE 1991, and were reported in the October 1991 edition of "Warship Technology", a publication of RINA (the Royal Institution of Naval Architects).

Picture of the Seastreak mock-up from the flight global archive attached:

Short's received a "prefeasibility" contract from the Royal Navy in 1986 to study the application of Starstreak to point defence; Seastreak seems to have been the product of this but it was essentially a private venture. The Admiralty Research Establishment (ARE) continued looking at a Very Short-Range Air Defence (VSRAD) solution to replace Phalanx and Goalkeeper. Additionally Short's Defence Systems executive director, Charles Rain-Brown, stressed that Seastreak would not be a solution for the very short-range air defence needs of the 21st century which suggests the outcome of the prefeasibility study was not what the RN was looking for.

However, ARE still favoured a small hyper-velocity missile as the ultimate solution and Shorts were apparently talking to Thomson-CSF about a potential joint programme for a future HVM for the 2000s for that role.

Edit: Thorn EMI were apparently working on new millimeter waveband fuzes for which the VSRAD programme was a potential application.

Edit 2: The UK programme was also referred to as VSRAD 2000.

Hmmm. ....presumably had things progressed this could have found common cause with German efforts along the same lines.
T

Aselsan of Turkey have exhibited and tested a mount with LMM. Can't see any reason why this wouldn't be compatible with Starstreak (probably no mods required).

MSI have proposed the eminently sensible Seahawk Sigma. Again there is no reason why this couldn't carry Starstreak.

I grabbed the attached photo from ThinkDefence. It's interesting and potentially relevant to this thread as the CIWS system mounted between the VLS and the main gun and also on the hangar roof, looks to be the Seastreak system.

I have seen this picture online several times before but I have no idea where its from or the extent to which it reflects any official design concept, there appears to be a date under the artists signature but I can only make out the first two digits (19 obviously); does anybody know any more about this?

I think the date might be 1986, but its not clear.
That would seem roughly the right date for the Seastreak and note that the EH101 Merlin does not look quite like the final version. This would seem to date it to the late 1980s.
It's an attractive looking design, I wonder if the aft search radar is meant to represent Type 1030 STIR and the foremast radar an early MESAR concept, though that was intended as a fixed four-array system rather than a rotating system which seems to be represented here.

If I'm not mistaken, that's official art of the planned Sampson class destroyer from 1996. I remember seeing it (and linking to it in another topic here) on the now sadly defunct Naval Matters website.

I've never heard of a Sampson class for the RN. I think this was associated with the pre-Horizon Common Next Generation Frigate (CNGF). The forward radar looks like MESAR, the aft one like Smart-L.
R

In terms of design, I'd definitely be thinking pre-CNGF based on the exposed mooring deck and proto-Merlin. The radar is clearly MESAR, which began in 1982. Interestingly, the gun looks like the Oto-Melara 127mm - the RN has wanted to get rid of 4.5" for a long time! The rest of the electronics fit is definitely British.

That the Merlin hasn't been nailed down suggests pre-1987 when the prototype flew. That lends credibility to the design being from 1986, presumably making it not just pre-CNGF but also pre-NFR90. If that's the case, though, it raises a question about armament - there are no illuminators, ruling out Standard and any form of Sea Dart. PAAMS doesn't use illuminators, but that project didn't formally start until 1989 or thereabouts. Given the detail given to the electronics fit, I find it hard to believe they've just been missed.

Alternatively, the Merlin has just been painted a bit 'off'; if you look at it from the right angle it isn't too bad. Given the funny-looking gun, a funny-looking Merlin is perfectly plausible. That puts post-NFR90, but pre-CNGF back into the picture. It's definitely relatively early, though, given the lack of extremes in signature reduction. That, too, fits with the timescale for Seastreak.

Based on all the evidence, I'd guess 1988 as the design date. Given the CIWS, reports that the UK wasn't keen on NFR90's lack of one, and reports that the UK was considering withdrawing from NFR90 from 1988, I suspect that this was the UK's domestic alternative that was superceded by NFR90. There's still a question over precisely what main armament was projected - this may have been a notional system at this stage.

PAAMS may have come later but it was "just" a development of the FAMS concept originally conceived as part of NFR90 circa 1986/87. FAMS was essentially ASTER with a multi-function radar (MFR) and long-range radar (LRR). These very quickly became the Selenia/Marconi EMPAR (which was originally a two-faced back-to-back configuration like that in the image) and the Thomson CSF ASTRAL.

I don't think there is any doubt that the weapons/radar fit broadly matches LAMS/FAMS/PAAMS and that in itself is hardly surprising as the basic concept was a constant in RN thinking from about 1986 all the way through to the T45 acquisition.

I concur with Hood, the date under the signature looks most like 1986 (but it could be anything). 1986 would just about work for both Seastreak and FAMS, 1996 feels too late for Seastreak. The general aesthetic looks early which again points to the mid-late 1980s.

TomS said:
I've never heard of a Sampson class for the RN. I think this was associated with the pre-Horizon Common Next Generation Frigate (CNGF). The forward radar looks like MESAR, the aft one like Smart-L.
Click to expand...

Sorry, I misremembered slightly. It was actually the Sampson AAW variant of the Horizon class destroyer for the Royal Navy, of which 12 were planned to be procured. I believe that there were also plans for a lower cost General Purpose variant for the Royal Navy without the full Sampson/PAAMS system, but they still hadn't been finalised by the time the UK pulled out of the program and shortly afterwards started work on the Type 45.
Share:
Facebook Twitter Reddit Pinterest Tumblr WhatsApp Email Share Link