What angle was the 20mm behind the cockpit at?

And where exactly was it placed? Illustrations don't make this very clear

45 degree.(Source : FAMOUS AIRPLANES OF THE WORLD, No.19)
Tei type modification was completed in July 1944 at the IJA aviation arsenal in Tachikawa.
Only two Tei type were made.
Unfortunately I have no information about exact position of Ho-5 cannon.

blackkite said:
No all five cannons are 20mm Ho-5.
Click to expand...

I can't understand what you mean. ???

blackkite said:
I can't understand what you mean. ???

Now i have understood " i missed one cannon at behind of the cockpit " ;D ;D sorry my fault

It's my pleasure airman-san.
Understanding is most important for human.

blackkite said:
It's my pleasure airman-san.
Understanding is most important for human.
Click to expand...

Would it be likely the Tei model had the upwards facing reflector sight to aim the Schräg Musik?

blackkite said:
It's my pleasure airman-san.
Understanding is most important for human.
Click to expand...

Would it be likely the Tei model had the upwards facing reflector sight to aim the Schräg Musik?
Click to expand...

Is there any more information about this aircraft? Seems rather obscure.


This comes from a forum and the author says its from a polish book:

Toward the end of 1944 the available reserves of strategic resources began to shrink dangerously, which was especially true of aluminum and its alloys, commonly used in aircraft production, as well as other light metals. As it was becoming increasingly difficult to replenish these resources, there appeared a threat of their exhaustion and of a severe crisis in the arms industry. Seeing that, the Koku Hombu introduced a program for replacement of the hardly obtainable duralumin with more easily available materials for aircraft construction, especially with ordinary carbon steel, wood and plywood. In fact, such attempts had been for some time made by the Rikugun Kokugijutsu Kenkyusho (Army Air Technical Research Institute, known as Kogiken or Giken) at Tachikawa near Tokyo.

In the autumn of 1944, engineers of Nakajima and Kogiken prepared technical documentation for replacement of certain duralumin Ki-84 components less vital in terms of material strength with new ones made of wood and plywood. This mainly concerned the rear fuselage, tail unit elements, wing tips, push-pull rods and other, minor components. Production of such modified aircraft was begun in the spring of 1945 by Nakajima's Ota factory, with the wood parts for the construction being provided by the workshops at Tanuma.

The partly wooden Ki-84 received the Nakajima factory designation of Ki-84-II (Ki-84 Model 2), or Hayate "KAI" ("KAI" from the word Kaizo = modified); this designation, however, failed to be adopted by the Koku Hombu. The IJAAF continued to call the "wooden" Ki-84s with the designations Ki-84 Otsu and Ki-84 Hei, depending on the armament option. Anyway, viewed from outside, the "wooden" Ki-84-lls were practically indistinguishable from regular Ki-84s. It is not known how many Ki-84-lls were produced, as they were counted among the overall number of manufactured Ki-84s. The Ki-84-II was powered by the standard Ha-45-21 engine or the improved Ha-45-23, or the most powerful Ha-45-25 in the case of the latest aircraft.

If anyone can speak Japanese, please feel free to have a browse of this book: https://www.scribd.com/document/148751364/Bunrindo-Famous-Airplanes-of-the-World-19-Nakajima-Ki-84-Hayate-Army-Type-4-Fighter

HmHm.....I can find description about Ki-84Ⅱ in this book. No new information here.

It often says in some sources that the Ki-84-II (Model 2) was produced under Ko Otsu Hei, depending on the armament.

But if the Hei armament configuration was rarely equipped, is it still likely that the Ki-84-II would have been produced with this armament?

I had forgotten to bring this in, a friend on our forums discovered a photo of the Ki-84 Tei model and information about it's sight and gun - and it happens to discredit all English and Japanese illustrations of it 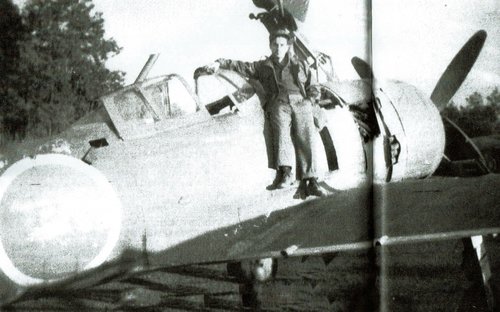 I do not have the reference, I thought he sent it to me but he didn't.

①Simple sighting device for Schräge Musik or its base
②Although it is in the fully open position, it is about 60% of the opening before remodeling
③Protrusions for attaching radio antennas
④Cylinder of ballistic cover
⑤Cutout to avoid cylinder
⑥Cut part reinforcement frame
⑦Cutting part reinforcing bracket
⑧Inspection opening related to Schräge Musik
⑨Remove antenna pillars
※The cylinder that comes out from the canopy is long to protect the canopy and the pilot in the event of an unexpected 20 mm bullet outbreak.

In addition, the following discovered from the data discovered this time.
･Trial prototype of Unit 1 was completed in September of 1944.
･The prototype Unit 2 was completed from October to November of 1944 at the latest.
･The test flight took place at Fussa airfield.
･The base of the Tei type is the Ko type. (The Otsu type appeared in November 1944.) However, mass production type was planned to be based on Otsu type.
･Schräge Musik had 300 rounds.

Hi Justo! Does that mean the Ki-84-Tei had two 20 mm's in the back? Do you have a reference to support? This plane is seems so confusing now.

All,
These are just a couple of thoughts (IE speculations): There were two Ki-84 Tei aircraft. Maybe the first one had the set up in the first plane of Justo's drawing and the second had the setup of the second plane in the same drawing. Then the first one got confused with the Ki-84 Ko -OR- the Ki-84 Ko had the same setup and it was carried over to the FIRST Ki-84 Tei. It would not surprise me because the Japanese were always improving things as they went along.