This has been bugging me for ages, so I thought I'd let it out...

With the advancement of small jet engines, how come I can't find any sign of their being used as tip jets or similar for light/experimental/personal rotorcraft?

Is there something fundamentally incompatible about this technology? Has helicopter design abandoned such ideas & moved on? In short, am I missing something, or has it just not happened because no-one has up and done it?

Or maybe it has, and I just missed it?
R

Like the Doblhoff/WNF 342 which was the first helicopter to take off and land using tip jets to drive the rotor?
H

Tipjets are well understood, and have been thought to save complexity and weight by skipping gearboxes etc, Like the Doblhoff/WNF 342 mentioned above.

What I am suggesting is that as:

Simple kit/ultralight/homebuilt helicopters have matured, and early on tipjets were a popular choice for powering such designs.
and
Small turbines have matured, becoming lighter, more powerful, more reliable, and cheaper.

Why are we not seeing any more tipjet (or even something like a propcopter-type mounting) designs emerging?

Is there some reason?

You would think that a large RC model aircraft gas turbine could work in this role, maybe even just one with a single-blade main rotor.
H

cluttonfred said:
You would think that a large RC model aircraft gas turbine could work in this role, maybe even just one with a single-blade main rotor.
Click to expand...

Quite, the sweet spot seems to be a 19kg turbine producing 100kgf, although that may be too big to hang off an ultralight helicopter rotor.

Considering how such "model" jets are being put to "real" use, such as the cri cri or jet assisted gliders, and how ultralight helicopters are often successfully powered by small piston engines, I would think that a suitable size/weight/power for this application should not be too hard to find...
H

It seems there are a few answers, it may be as simple as noise and the engineering facts that the simplicity of the concept is outweighed by adding complexity and weight elsewhere (blade strength and fuel feed issues)

it seems the engines are more than powerful and mature enough:


A couple of posts adressing this exact question: 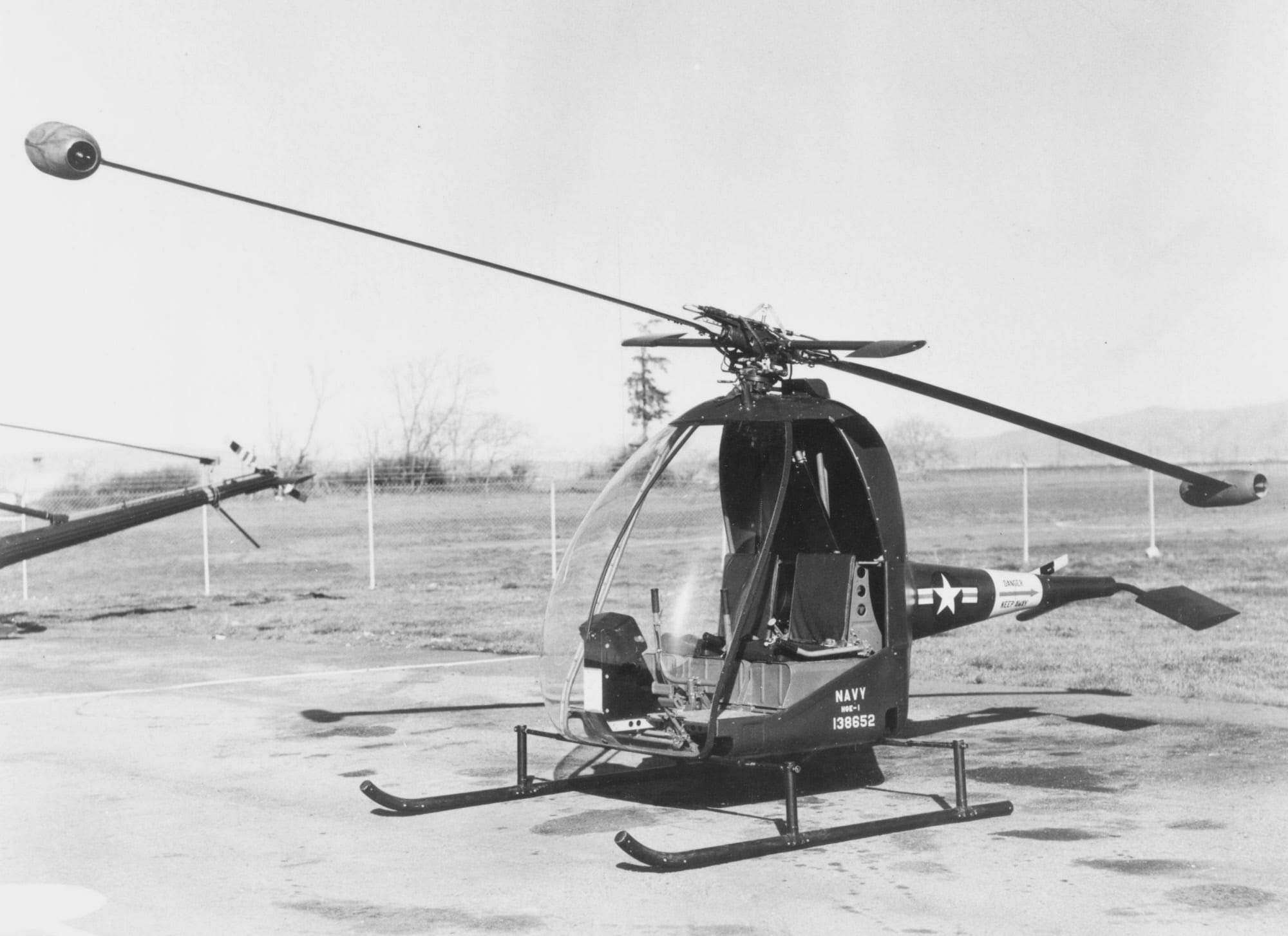 This Is Why Tip Jet Helicopters Are Still So Rare

A tip jet helicopter also called the ramjet uses nozzles at the tip of helicopter rotor blades to spin the rotor. Here are the design issues that make them unpopular.


Why are tip jet helicopters so rare, even though it doesn't seem very complex and would work fine with current engines, like turbines or any kind of compressor? - Quora
R

Most tip-driven helicopters have used ram-jets (ala. Nazi Germany, V-1 buzz bomb, cruise missile) because they are so simple. Ram-jets have no turning rotors and only one moving part, a valve. The valve oscillates to regulate airflow, hence the "buzz." At Oshkosh 1993, we watched a restored Hiller Hornet try to fly. It only got one ram-jet engine burning and that was almost painfully loud!
Turbine engines suffer greater blade tip losses as they shrink in diameter. RC modellers are making most of the progress in that field.
As machinists get ever more precise, we may eventually tip turbines.

As for varying blade pitch - without affecting engine thrust-lines - they will probably need Flettner tabs to change airflow around rigid rotors. Flettner tabs act more like ailerons in this configuration.

You are mixing ramjets and pulse jets.

Ramjets do not have valves and depend on their motion through the air to compress the intake air sufficiently for them to run and have continuous combustion when running. They will not run without fast moving intake air provided by the speed of their vehicle boosted to running speed by some other propulsion. A rocket engine was used to get the Bomarc missile going fast enough to start its two ramjets.

Pulse jets have reciprocating combustion and use a mechanical valve to control the intake, ignition, and exhaust cycle that they run through and will run at no forward motion after being started. The shutters on the front of a V-1 engine are the valves of its pulse jet engine. There is a variation of the pulse jet that has no mechanical valve and instead uses a cleverly designed passage that traps a moving pressure wave to take the place of the mechanical valve.
H

Hi.
The Hiller Hornet have tip blade jet engines.
But the consumption of fuel was extraordinary.
Also, the engines on the tips blade it implies a big drag in autorotation, the Hornet rate of descent is 4000 feet per minute...
There is an NACA Technical Report about this helicopter, if you need, I can send....
(Sorry my english...)
Share:
Facebook Twitter Reddit Pinterest Tumblr WhatsApp Email Share Link