Had McDD pursued the MD-11 as a twin from the program's inception, they'd have given Boeing a credible challenge to the 777. Instead, MD-11 was launched as a warmed-over DC-10 while Boeing found notable success with its groundbreaking jumbo twinjet. It's another example of the extreme risk-aversion that drove McDD into the ground.

I think the MD-11 predated the engines that made the 777 possible. I'm sure that Douglas anticipated the engines that shortly made a trijet uncompetitivel in that segment, but saw that they had a window during which a DC-10 stretch would be the best solution - meaning that they were better placed than Boeing or Airbus to fill it. As it turned out, the MD-11 was hampered by fuel efficiency shortfalls. Maybe the hope was that if the MD-11 got its foot in the door, it would expand that window by damaging the business case for development of the new engines. The 777 and A330/340 have typically replaced 747s and they would probably make less sense as a replacement for a newer trijet since engine overhaul costs are such a big factor.
The MD-11 Twin apparently was at some point marketed as the MD-20 (see attached). The 777 clearly inherited it's tailcone shape, maybe more? Note also the MD-XX trijet parked in the background. 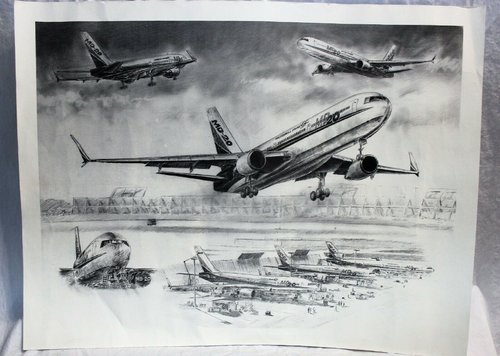