if you please tell me about Besson MB-21,was it a fighter,recce
or bomber,that is I am very grateful to you.

the Besson MB-10 was open-sea bombing reconnaissance triplane flying boat,
and it was the first aircrfat built from H-5, and the MB-11 was the civil version.

Also the Besson MB-30 was a project for 1928 competition,the
tenders were;

And the Besson MB.24, same source. It seems to have been built, and rejected, but no photograph seems available.

thank you very much,now we know the Besson MB-24 was a
project against 1923 competition,main tenders were;

hesham said:
Also the Besson MB-30 was a project for 1928 competition,the
tenders were;

My dear Tophe suggesting, the LeO H-16 project was involved in this
competition for Torpedo Bomber;


hesham said:
The Besson H-4 was a little known flying boat of 1921, has anyone a more info about it ?
Click to expand...

No info about the H-4 except that it was a school trainer powered by a 130 hp Clerget engine.

There was also an H-6, which was a tandem-seater "sports type"/mail-carrying seaplane that could be powered with either the 130 hp Clerget, a 120 hp Rhône or a 140 hp Hispano-Suiza. The passenger's seat could be fitted to receive a 100-kg mail load.

(all the above info from an issue of Le Trait d'Union)


do you mean issue 130 ?,by the way the H-6 was not a project,but actually
built,and there is also an unknown project for Besson,may be a light aircraft,
no more details about it.

I'm not sure. I have a scan of the info but no precise reference attached.


hesham said:
by the way the H-6 was not a project,but actually built
Click to expand...

Yes, I admit my post wasn't very clear about that, but you're right.

not all the Besson MB series aircraft,the MB.29 was a boat.

Thanks hesham for providing the designation of this type, of which I had this other photo:

A series of Besson prototypes and rare types:
The latter two types seem to have been built but probably produced in small numbers. According to Le Trait d'Union, The Coast Patrol and Deep Sea Patrol are different from the 1919 Hydravion de reconnaissance that was powered by a 450 hp Renault 12 Ja engine.

but in your pictures,the Triplane was itself the Coastal Patrol,in 1916,Marcel Besson
employed in Levy (Hydravions Georges Levallois et Levy),as LB series,began with
a single seat fighter triplane with I-type interplane struts,and powered by one
180 hp Hispano-Suiza pusher engine,then followed by a deep-sea patrol and
coastal patrol triplanes.


In 1919 he formed his own company,and may be he started with H-1 and H-2,
of course the last two aircraft is only my suggesting,after that he created the
MB series,which used it from his early aircraft of 1912.
S

hesham said:
but in your pictures,the Triplane was itself the Coastal Patrol,in 1916,Marcel Besson
employed in Levy (Hydravions Georges Levallois et Levy),as LB series,began with
a single seat fighter triplane with I-type interplane struts,and powered by one
180 hp Hispano-Suiza pusher engine,then followed by a deep-sea patrol and
coastal patrol triplanes.
Click to expand...

I certainly wouldn't think of questioning what Le Trait d'Union said here. If they said that the triplane in the photo it the Hydravion école (school flying boat) of 1919 and give a detailed description of it, then it's good enough for me. You keep guessing and supposing too much!


I suggested one thing,the H-1 and H-2 designs,but for the triplane picture,which you displayed it,
I repeat again,it was the coastal patrol aircraft,which you also displayed a 3-view to it,they are
the same.

Mistakes, even in books, are always possible and so every piece of information must be taken cautiously. You have no idea how many mistakes I found concerning early Curtiss flying boats in many books for instance...

Still, I cannot assert right now that the Hydravion école text and this photo were associated, although I think they were. I'll have to dig up that issue of Le Trait d'Union and verify if it was so or if I made a confusion at some point or other.


I ask my dears Toura and C460,if they have a more projects to Besson,please send
it.


The MB.27 was a seaplane transport aircraft,powered by one 400 hp Lorraine engine,
intended for used in saint Raphael during 1925,but it was not successful.
S

Okaaaaay... did my share of homework on Besson types over the past few days and came up with a few things. A separate topic will be created in the "Designation Systems" section. Let's keep this here topic for images.

First of all, Besson's Canard.

The type was introduced in 1911. 4th attachment shows an early presentation with the fuselage not entirely covered. An Aérhydroplane (float) version of it was illustrated in 1912 (see 5th attachment below) but no photos seem to exist. Finally, a two-seater version was exhibited in 1913 but I couldn't find any photos either. Perhaps someone here knows of any?

The Besson H-6 was exhibited at the 1921 Paris Show in the Grand Palais. It was a nicely-built small single-seater flying boat of very unusual design: it was a triplane flying boat two-seater with the lower wing being the largest and the top wing the smallest. The flaw in such a design was that the centre of thrust would be quite far above the centre of resistance. The strutting featured a system of triangulation which apparently made bracing wires superfluous.

The 130 h.p. Clerget engine was mounted in a streamline power "egg" which also contained the fuel tank. It drove a tractor screw, having a spinner over the boss. The pilot
sat just aft of the trailing edge of the wings, and therefore could not get such a good view as in a pusher flying boat.

Although presented as a "sport type" mail-carrying aircraft, there did not seem to be much room anywhere for mail, and the diminutive machine could probably carry no more than a relatively small payload.

The fate of this sole prototype is not known.

At the 1919 Paris Aero Show, Besson, who had now separated his activity from that of Georges Lévy, exhibited his Hydravion-école, a small triplane flying boat two-seater, powered by one of the then-new 60 hp Le Rhône engines.

The two seats were placed side by side in the boat, and dual controls were provided. Only the middle and upper wings had ailerons. Initially, all three wings had a 6-meter span, but the middle one was later extended. The aircraft measured 9 meters in length.

Although appearing as a handy little machine, it was unlikely that with so little power the machine could ever take off. In fact when it finally flew it was with a more powerful engine, and was able to reach 90 knots with a 3-hour range. This leads me to wonder if the quoted H-4, a school type powered by a 130 hp Clerget engine, may not be that same machine.

There doesn't seem to have been any production of that prototype.

With the Levy-Besson triplane flying boat's bad reputation, and the lack of customer for his post-war prototypes, Marcel Besson sought to diversify his activity. Between 1920 and 1925, he built powered boats and water-planes (now called hydrofoils) in Boulogne-Billancourt. The first of these, which made quite a sensation in 1920 when it was exhibited, was the G-1, a transport water-plane for 10 passengers.


also the Besson built a biplane and triplane trainer aircraft of 1914,them followed
by the LB series as I mentioned,and may be those two aircraft called H-1 and H-2.
S


also the Besson built a biplane and triplane trainer aircraft of 1914,them followed
by the LB series as I mentioned,and may be those two aircraft called H-1 and H-2.
Click to expand...

Why do you repeat what you just said two days ago?

I'm going to provide more info and pics for the 1915 and LB planes, just be patient.


I don't repeat my words,but when I know those two aircraft from 1914,today
I suggest they are what I meant.

hesham said:
The MB.27 was a seaplane transport aircraft,powered by one 400 hp Lorraine engine,
intended for used in saint Raphael during 1925,but it was not successful.
Click to expand...


I suggest that,the Besson MB.21 was a single seat marine fighter project,intended for 1922
competition,which Bleriot-101 and CAMS-31 were involved.

the Levy-Besson developed a single seat triplane fighter seaplane in 1918,and in Le Fana 26,
they called it H-9,I think they meant MB.9 ?.

I hope you still remember . 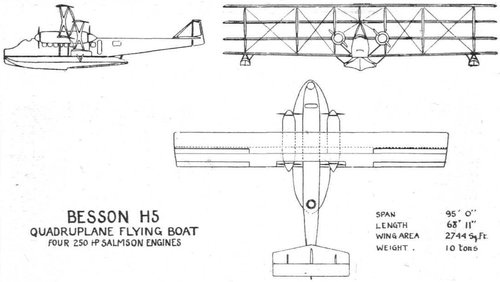 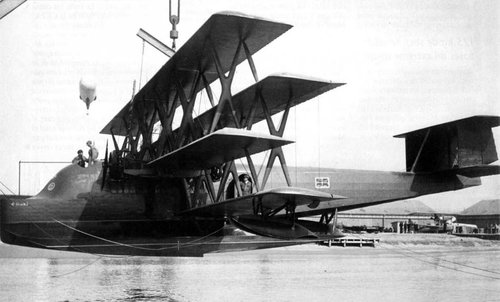 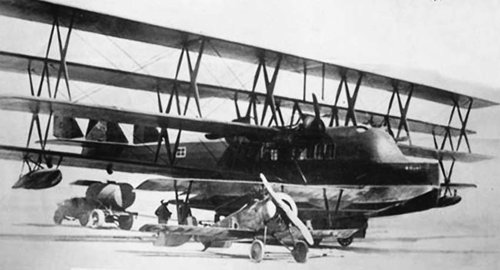 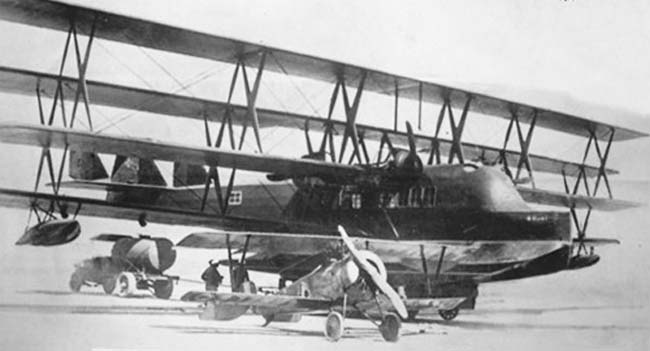 en.wikipedia.org
"Powered by four Salmson 9Z radial engines that were located in tandem pairs in line with the third mainplane." 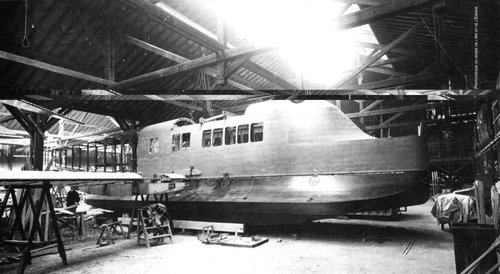 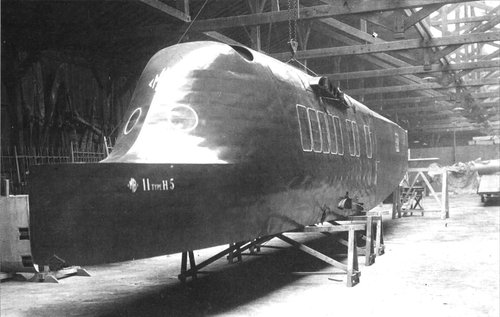 yes, we can see the 4 radiators, on each side of the engines

Hi!
This front view is little different from existing three side view drawings.

http://richard.ferriere.free.fr/bleneau/besson_h5/besson_h5.pdf
Is there anything interesting in this document?
Last edited: Jan 25, 2020