I know - pic of this plane was in one discussion about german planes on this site, but it was without any tech data or 3 side draw - so i hope it will be interesting for you.

I address to you after the drawing (of which I am the author) posted today
by AF as "Lippisch Glider Bomber". It is taken from a page of my book
"Secret Wonder Weapons of the Third Reich" published by Schiffer in 1996.

It is not sure that this may be a Lippisch design. Dieter Herwig names it
"DFS Bombensegler" in his book "Luftwaffe Secret Projects Ground Attack"
published by Midland in 2002.

To clarify the issue, please find attached a copy of the original article
from where I obtained the information.

Welcome to the forum Mr Miranda, it's a pleasure to see you here

I'm not really sure what to make of this. Even though it's from the Daily Mail, could it be a hoax? A glider with a speed of 700mph?


Cutaway said:
I'm not really sure what to make of this. Even though it's from the Daily Mail, could it be a hoax? A glider with a speed of 700mph?

That's the "Lippisch" glide bomber. I was always *highly* dubious about this design... 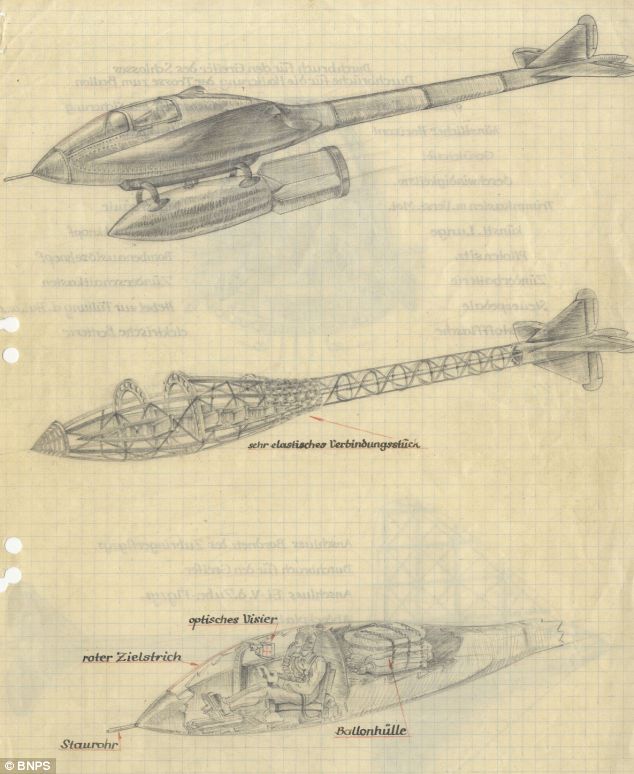 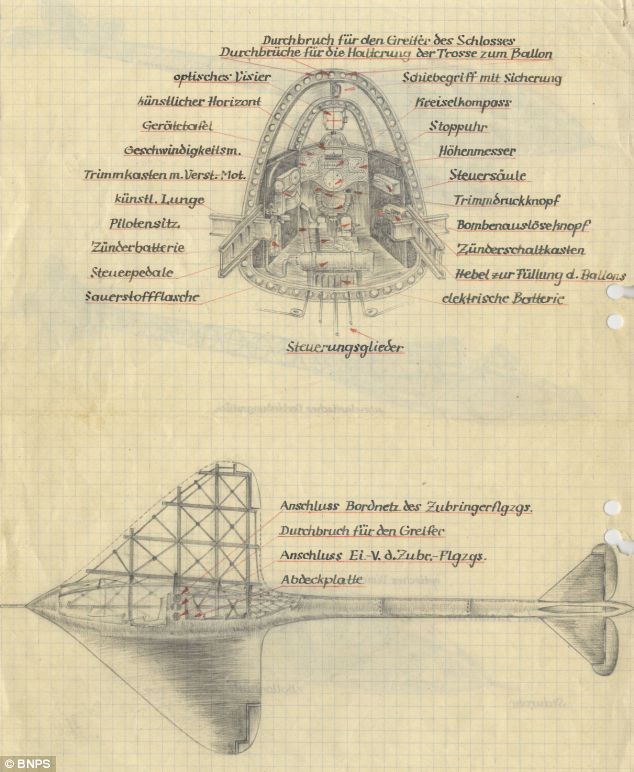 The drawing style does not look like Lippisch's, nor does the text. 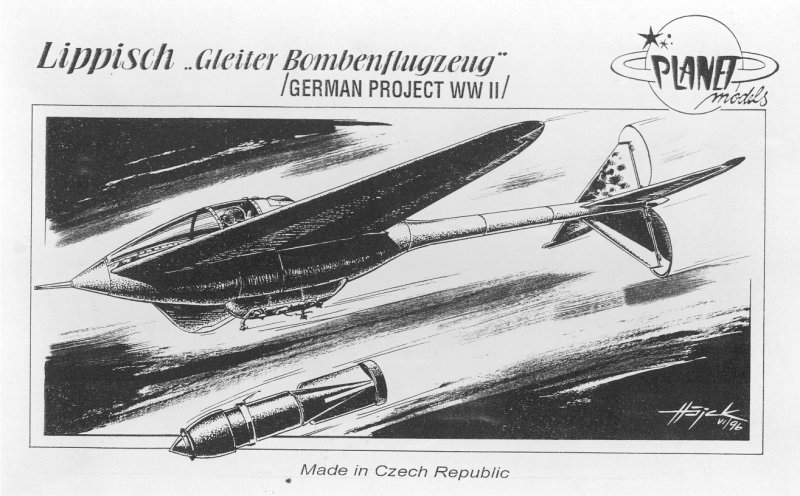 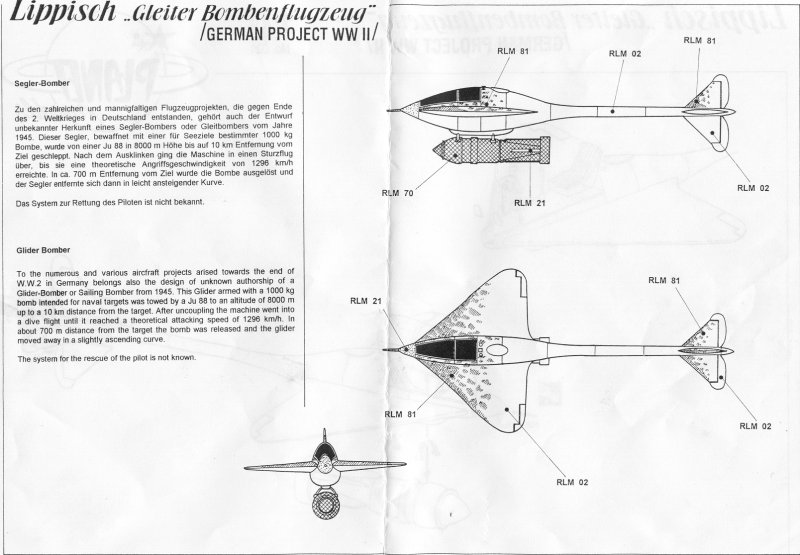 there something fishy about those 2 Yellow papers

who ever made this drawings, don't know to wright German and made a literally Translation of it
J


Can you think of the Space Shuttle as being a 700+ MPH glider?


Cutaway said:
I'm not really sure what to make of this. Even though it's from the Daily Mail, could it be a hoax? A glider with a speed of 700mph?

Michel is absolutely right with his comment and if those papers are sold as
"original documents", we should be aware, that actually there aren't (and
probably never were ) any other sources. I haven't seen any mention, that
Alexander Lippisch was involved in this design, so maybe this was just a guess
due to the planform of the wing. Maybe the annotations were added later, by
someone not familiar with the german language, or at least not with aviation
terminology, but that really cannot increase my trust in these documents.
And professional technical drawings probably wouldn't have been made on this
kind of paper, which can be found in exercise-books. Maybe this could be the
true source : A talented school boy sitting in an airraid shelter, illustrating his
dreams ? ;D

Maybe it would be interesting to know the name of the winner of this auction.
We probably could sell him a lot of other "original drawings", as I still have several
old exercise-books from my father. A good source for authentic paper, the rest
is no problem ! ;D

I'd say that selling a fake is a crime - of course, I'm talking of this actual auction, not of Jemiba.
I just wander that no one can say auction holders about that interesting German grammatics...
J

It is not very scientific to desestimate an information based on the quality of the graphic material on which it is presented.
Before the time photocopier machines existed, it was usual to copy texts and drawings using a pencil.
Please find attached some examples of known projects published by Fritz Hahn in his book "Deutsche Geheimwaffen 1939-1945", Erich Hoffmann Verlag, in 1963.

Justo, i was talking of this


Michel Van said:
there something fishy about those 2 Yellow papers

who ever made this drawings, don't know to wright German and made a literally Translation of it
Click to expand...

Of course.
It is obvious that the texts were added later on by someone without technical knowledge but with an excelent caligraphy!
B

For those of you who have "The Dream Machines" please look at page 184 and
Max Valier's Trans Channel Rocket circa 1929...

Well Justo,
I don't want "to desestimate an information based on the quality of the graphic material ",
it's the KIND of material, that leads to some scepticism. It's not the ususal kind of construction
drawing, I think. You're right, if copies were made during, that was often done by hand, but I think,
with ink, not with a pencil. If I think positiv about it, those drawings look to me, as made from
memories, maybe to illustrate a design someone worked on, but has no original drawings any more ?
But why they were found then amongst original german documents ?
And why the annotations were added later, When were they added ? Before the docs were found, or
after it ?
There are too many uncertainties to regard them as really trustworthy, as this wouldn't be very
scientific, IMHO.
And, as this auction shows again, there is a large market for such stuff and a lot of money can be
earned with it. And so there's the very real danger, that fakes are produced.

For all of you, who want to know, how this business goes and want to be told in a very funny
way, I highly recommend the german film "Schtonk" AFAIK available in an english version, too !
B

I echo the scepticism of many of the above contributers for several reasons:

To my understanding of the posts, this is an aircraft which would simply reiterate the role already fulfilled by the Fritz-X FX-1300 guided bomb or Hs293 [and variants] - and would hence be a superfluous design; which would go against the thinking of a "cash and resources - strapped" RLM towards the end of WWII. i mean, how does "plane + bomb" versus "plane + plane + bomb" sound as a design brief ? I reckon the latter sounds both superfluous and illogical.
That is to say, it is a design which "defies logic"...

Those drawings probably were examined before the auction by experts and so we
can regard them as authentic stuff from the late war years, I think. The problem
just may be, what we discussed in this thread
http://www.secretprojects.co.uk/forum/index.php/topic,6206.0/highlight,boeing+design+paper.html,
were Scott gave a very good definition of designs/projetcs, that matter and those, that
don't matter. And to me, from all characteristics, this design is one of the latter category.
To my opinion, a problem with such documents is, that just the fact, that they are sold
this way, gives them a credibility, they don't really have, a kind of "... there must be some
truth in it, otherwise nobody would pay a lot of money for it !".
And, another question, we all can ask ourselves : Aren't there cases, we would rather like
to take things for real, because we just want them to be real ? Preferences are different,
of course,but probably many of us are looking for the "sensational new, unknown project" !
(And I'm absolutely not free of this kind of wishful thinking !)
B

Thanks for the illuminating reply, Jemiba (and to everyone else who participated on the thread you linked me to).

I'm a bit of a newbie when it comes to Fora - this being the first that i have ever joined - and have been deeply impressed by the breadth and depth of knowledge of the contributers. That said; how many auction houses possess the expertise required to evaluate - often highly - technical matters such as this design? Even the most sage members of this Forum have been known to be confused on such matters [BTW, i'm not saying that it is an outright fake]

Could it be that a "superfluous design" is one that "doesn't matter"?

I like to kid myself that i'm Objective about the " sensational previously undiscovered" designs... but i doubt that i am ever entirely so


Barrington Bond said:
For those of you who have "The Dream Machines" please look at page 184 and
Max Valier's Trans Channel Rocket circa 1929...

The first drawings in this thread look extremely similar to Messerschmidt's "Libelle" project, a fighter design with v-tail. 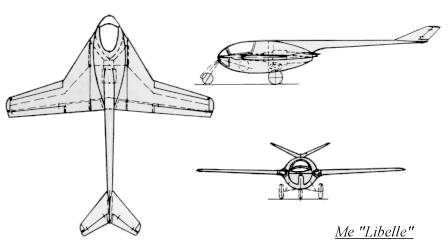 I've merged the two topics about the allegedly Lippisch design, after splitting the discussion about the
manned V2.
Motocar, if you meant the latter, just tell me, would move your post then. But if you meant the Lippisch
glider, perhaps using your talent on a better proven design would be a good idea ?
Share:
Facebook Twitter Reddit Pinterest Tumblr WhatsApp Email Share Link