In the short time after the Wright Brothers first flew their Flyer in 1903, some had toyed with the idea of marrying the airplane with the automobile to produce the convenience of long distance flight with the ability to drive from the airfield to their desired destination. The first person to put this idea into an actual concept at least in the United States, was Glenn Curtiss of the Curtiss 'Jenny' fame. This is the Curtiss Autoplane of 1917. Being that it was under-powered there is not any information that it ever truly flew, other than some statements that it may have lifted off the ground in short "hops". After U.S. entrance into World War I, further development was abandoned so that Curtiss could concentrate on JN-4 'Jenny" production. It was shown at the Pan-American Aeronautic Exposition at New York City in February 1917 to public delight then it disappeared. It was constructed using the wings fron the Model L trainer, fitted to a hand built body. There are several large resolution pictures, both during construction, and at the Exposition, so that I was able to correct most of the mistakes from the original line drawings. This is the result. This is the front profile. I believe that the body was painted a light color, although it may have been left natural Aluminum. Since I think that it was painted, I went with a light green I found on a 1917 Reo car. The other choices I had were Yellow, mundane Grey, or White. I considered yellow, but went with the green instead. The patent states that an optional left hand door was available but I believe that the prototype only had the right side door so I provided both right and left side view. Since the propeller in the front view only covers part of the tail fin bracing struts and the top landed and flying versions are virtually the same I have only done one of each. 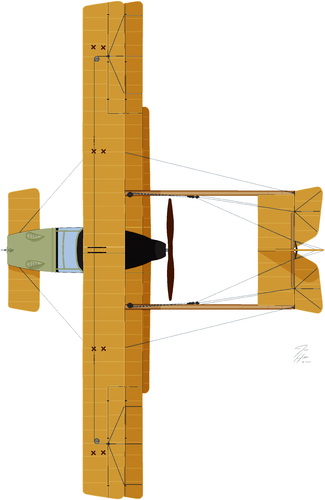 Has anyone modelled this? I've seen kits of obscure designs, many of which never even made it off the drawing board or even the cocktail napkin, but never this? This'd be a pretty nifty kit for any collector of obscure types.
G

maxmwill said:
Has anyone modelled this? I've seen kits of obscure designs, many of which never even made it off the drawing board or even the cocktail napkin, but never this? This'd be a pretty nifty kit for any collector of obscure types.
Click to expand...

While doing my research before and during my drawing of this, the only model I have seen is a custom built RC model made by Désirée Coertjens–De Meyer, in Belgium. It was in a .pdf newsletter from the Glenn H. Curtiss Museum, and included a photograph of it and a small paragraph about it. Other than that I haven't seen any other type of model built or in kit form.
Share:
Facebook Twitter Reddit Pinterest Tumblr WhatsApp Email Share Link