It seems that there might have been some Serbian/Yugoslav input in this design?
T

Doesn't sound like there was any input in the design itself, merely a model built and tested under contract. Much like TsAGI apparently did for the E-Jets.

Nevertheless, a very interesting connection, shedding some light on capabilities that perhaps not everyone would have expected at VTI!

EDIT: I don't have time right now to add them to the corresponding thread (which I know already exists here), but there are at least 3 small pictures of Novi Avion windtunnel models scattered about the VTI site!

The N-245 will be powered by Pratt & Whitney Canada engines. The CN-235 is powered by GE CT7 engines. A key selling point of the N-245 is that it can land on shorter runways than other 50-seat turboprop aircraft and can utilize unpaved airstrips.
Click to expand...

Back in the deep recesses of my aviation writing career in the late 1990s, I was involved with a company called Airclaims. My role was as the Media Coordinator, or basically a journalist, writing a weekly newsletter which was distributed to the subscribers of the companies database. This database tracked the individual histories of all turbine powered airliners of 19 seats and above, together with business jets which had been ordered, including cancelled orders such as the Concordes for likes of JAL, Iran Air etc. Anyway, amongst the many publications I was responsible for, was one called Jet Programs (sorry I know we were a British company, but the US market was one of our biggest, hence the spelling). When updating the 1998 edition of this publication I wrote about the N2130. Here's a brief synopsis. The N2130 was launched on August 10th 1995 following the first flight of the N250 regional turboprop airliner. It was expected that the first N2130 would be rolled out and flown by mid 2002, with first customer deliveries in the first quarter 2004. The N2130 was initially planned to be a family of 80 to 130 seat models, but by March 1997, the 80 seat version had been dropped, with IPTN concentrating on 114 and 132 seat variants (later to become the -100 and -200). Also by March 1997 a decision had been made to look at a six abreast seating arrangement, instead of the initial 5 abreast layout. Yet another feature formulated at this time was the provision of both a basic and High Gross Weight (HGW) variant of the two models. The N2130-100 was to be 102.5 feet long with a 98.2 feet wingspan. MTOW was to be 49.550 lbs for the standard variant whilst the HGW version was to have an MTOW of 51,500. Powerplants of around 19,300lb thrust rating were to be installed below the wings, with the selection being from the BR715, the CFM-56-9 and the PW6000. Control was to be by fly by wire using conventional yokes. Range capability was to be between 1200 and 1,600nm with 114 passnegers. The larger N2130-200 was expected to appear around twelve months after its smaller sister variant. It was to be 111.1 feet long with a wingspan of 98.2 feet MTOW was to be 56,600 or 58,700 for the HGW variant. With the added capacity, larger powerplants in the 22,000lb thrust rating bracket were to be installed, with the same three engine types to be chosen from, albeit in uprated variants. Despite the larger size, IPTN were expecting the same range capability for the -200. Almost as my words were going to the printing press, the Asian financial crisis in 1998 spelt the end of the N2130. However despite the supposed cancellation, a scale model of part of the wing assembly was designed and built for Indonesian Aircraft Industries (IPTN) in the years 1999/2000 by Vojnotehnièki Institut Ratka Resanoviæa [VTI], Beograd, Serbia. The wing segment comprised: wing, including main wing box (1805mm half-span), single-slotted flaps (4 positions), clean high-speed leading edges, slats, an immovable aileron, and installation for measurement of pressure distribution on seven chordwise wing sections, ·wing-fuselage fairing, through-flow nacelle (TFN) and its pylon, with instrumentation for measurement of pressure distribution, turbofan power simulator nacelle (TPS) and its pylon, with instrumentation for measurement of internal flow parameters and other installations necessary or the operation of the power simulator. Most of the model was produced on CNC milling machines. For some specific components CNC EDM (electrode and wire-cut) was used. Artistic hand finish was applied when appropriate. Main parts were built from high-grade stainless steel, while the less stressed parts were made from aluminum alloy. Quality control was carried out on CMM coordinate measuring machines. Main parts of the wing were the outer and the inner wing box, each box assembled from the upper and the lower half. Sides of the boxes formed two main spars of the wing. Leading and trailing edge devices were detachable in order to enable changing of wing configuration. In July 2000 the wing was transported to ONERA facilities at Toulouse and there was assembled with the fuselage-tail assembly. During the summer of the same year the model was successfully tested in F1 and S1 wind tunnels. Quite a lot of work for a supposed cancelled project! Here's yet another promotional image of the N2130. 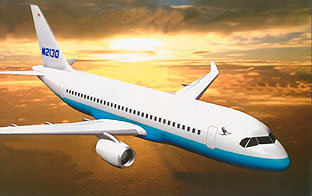 It's a shame the N250 never got into production. There is still a market for 50 to 68 seat turboprops. The ATR is not all it's cracked up to be and is packed with issues of its own and the Q300 is long out of production. The Q400 is a completely different kettle of fish to both the ATR and Q300, so works only for long haul high frequency routes, but Viking really needs to investigate putting the Q300 into production again. (Well maintained) 2nd hand Qs are worth their weight in gold.