As I mentioned in my reply within the Hillson Pennine post (https://www.secretprojects.co.uk/threads/norman-sykes-unorthodox-aircraft.5116/), following the Pennine was another project from the draughtboard of Norman Sykes. He saw that with the imminent prospect for war, that the RAF would need as many aircraft as possible to train pilots. To this end he designed the Helvellyn as a type that could be built quickly and cheaply. The Helvellyn was a monoplane with two tandem open cockpits. Power was to come from a 90 hp (67 kW) Blackburn Cirrus Minor I engine. Although the Helvellyn was fitted with a conventional, for that time, tailwheel undercarriage, Sykes had allowed provision for this to be exchanged for a tricycle layout. Like the Pennine, construction of the Helvellyn was carried out at Hillson's Trafford Park factory, this finishing in 1939 with the aircraft being roaded to the airfield at Barton for its maiden flight. It can be confirmed that the registraion G-AFKT had been allocated to the aircraft on 7 November 1938, (see attached record). Unfortunately the RAF were not interested in the type, with plenty of DH.82 Tiger Moths and Miles Magisters fulfilling the needs at that time, leading to further work being withdrawn on the type by mid 1940, by which time the company had begun manufacture of Proctors for the armed services. The sole example of the Helvellyn was utilised by the company as a hack aircraft until November 1942 when it was dismantled. The registration was finally cancelled in 1945.
Specifications
Crew: 2
Length: 22 ft 0 in (6.71 m)
Wingspan: 33 ft 0 in (10.06 m)
Empty weight: 900 lb (408 kg)
Gross weight: 1500 lb (680 kg)
Powerplant: 1 x Blackburn Cirrus Minor producing 90 hp (67 kW)

Performance
Cruise speed: 110 mph (176 km/h)
All data from Putnam's British Civil Aircraft Volume 3.
The two attachments for this are the only picture I can find of the sole Helvellyn, together with a copy of the original registration certificate. 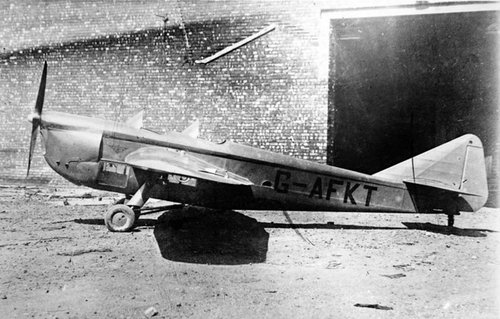 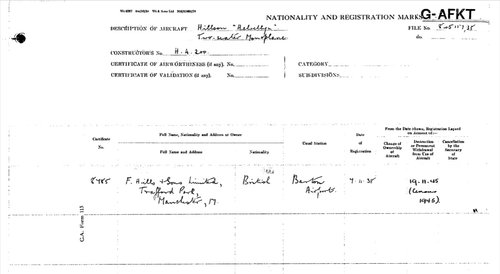 To be fair, in early 1940 the Allies were still under the illusion that it would be a short war.
J

Not only the Allies