Having a look at the Key publishing forums and i happened upon this... the remains of the P1121 in deep store at Cosford...!

Is that link not working for anyone else?
A

This came as a suprise for me, too, when I discovered this thread one year ago.
That's right, P.1121 parts are "preserved" at Cosford, but public can't see them AFAIK.

Photos were rather dark

'The 1121 was to all intents and purposes the British Phantom and it was in the right time scale. In fact it had advantages over the basic Phantom design, in that the structure was much tougher and in true Camm tradition. It would have been able to stand up to the buffeting of low level operation far better than the Phantom which has had to go through a long series of beefing up modifications. If the 1121 had been ordered in 1958 it could have been in production in 1964 to provide a sound basis for the RAF intercept/strike missions.'

How accurate is this statement?

The P.1121 was a less ambitioned project, than the TSR.2, I think, structurally and aerodynamically
largely based and its Hawker ancestors.
And it probably would have been managed by Hawker alone, not a consortium like the TSR.2.
There were alternative engines proposed, so failure of one of them wouldn't have stopped
the program, the same was true for the radar and weapons.
So I would think, a six-years-timescale was quite realistic in these days .

The most likely scenario to get P.1121 in service in my opinion would be if the P.1103 had won the F155T tender in 1955. Given a six year turnaround, it could have been in service in 1961. From that, the family could have been enlarged to include strike derivatives (P.1121, P.1125, P.1129 types) etc. Unfortunately F155T was in many respects a "fantasy" specification, demanding extremely high performance without the slightest clue how it would be possible for the UK to fund the development and production of such a complex aircraft. Hawker's P.1121 and English Electric's P.8 were the only "sensible" contenders (IMHO) and were both eliminated early on.

Failing that Hawker could have spent the money getting a P.1121 prototype built as quickly as possible in 1957/58. Even without domestic sales, it might have sold overseas, perhaps to India instead of the Su-7 for example.
Z

P1103 had terrible visibility over the nose for approach, just one look at a drawing from the side shows it.
P1121 was somewhat better.

IMO Hawkers should've persevered with the prototype, since by 1960, I have strong suspicions the RAF would be looking for a two seater FAW (fighter all weather) and the P1121 would fit that bill quite nicely as a successor to the Javelin.
Its quite likely under such circumstances that fewer Lightnings would've been ordered and instead a Fighter/Attack variant of the P1121 developed.

The 1958 proposal to GOR.339 would mate 'blow' with the more refined wing expected to be flown on the first prototype after its initial flights to validate the machines basic design and performance parameters.
The biggest flaw is the main gear doors cause issues with the inner trailing edge flaps.
his is the version with ground attack strengthening, permitting 200gal drop tanks on the outer wing pylons and 300gal drop tanks on the inner drop tanks.
Features include:-
28 inch diameter dish in reprofiled nose, likely a variant of the AI.23 AIRPASS II.
Two seater.
Flush retracting IFR probe.
Ventral recess for Red Beard or various 'packs' (recce, guns, fuel etc)
Olympus OL.21R for 29,000lb reheated.
Weight at overload is 54,590lb, with 1,000gal external fuel, 1,500gal max internal fuel.
600nm ROA possible but 1,000nm required IFR.

Gyron for 20,000lb dry, 27,000lb reheated (though one with a representative P1121 inlet ran upto 29,000lb), this not really suited for the strike role, it makes a better fighter engine. Despite this Hawkers first submission pre-GOR339 was this, with the early wing for 700nm ROA from a 43,700lb take off weight.

RB122 - Scaled up RB106 "Thames", ideal for high altitude supersonic fighters, not so good for low level strike. This more relates to the P1103.

Conway 31R This formed the basis of the Podded maingear version which dealt with the issues of the flaps and the gear doors, this grew to 70ft in length and also had the ventral recess for weapons circa 1957 this is called the P1123.

Olympus OL.22R- the TSR.2 engine not actualy proposed, but clearly a natural progression from the rest of the options.

The size of the engine bay permitted a wide veriety of engines to be fitted and Camm was always less than willing to commit to just one engine, something I think that went back to WWII with him.

Finaly there was the reuse of the P1121 wing, tail, and parts of the fusilage forward of the ventral inlet on the P1125.
P1125 was a twin Avon RB.133 machine obviously with a new fusilage. Quite attractive.
P

How easy would it have been to modify the P1121 etc designs for semi recessed carriage of air ro air missiles as with the Phantom?

Roy Braybrook (who was at Hawker at the time) has suggested that Sydney Camm's basic mistake with P.1121 was making it too big and complex. His assertion is that a smaller aircraft in the Draken class would have been more successful.
P

What would it have taken to make the P1121 carrier capable?
S

A big carrier! (sorry, couldn't resist it)
Click to expand...

Zen has already pointed out the lift size problem elsewhere....

Tony Buttler's coverage of the P.1121 in BSP: Jet Fighters Since 1950 is much less sanguine. He covers the Air Staff's skepticism and Camm/Hawker's failure to grasp the concept of the 'weapons system', along with the problems with the Gyron test runs. It would have been interesting if a prototype had been completed and whether it would have performed to Camm/Hawker's claims.

The Air Staff thought P.1121 wasn't good enough for F155T or GOR 339, but several members privately encouraged Camm to develop it as a fallback in case either or both of these projects were cancelled.

Here's illustrations of P.1103 and P.1121; real original models, photographed by Tony Buttler, and edited by me to remove the backgrounds. Note the very close similarity - to Hawker they were both the same "new fighter" project.

A cutaway from The Aeroplane.

A big carrier! (sorry, couldn't resist it)
Click to expand...

Zen has already pointed out the lift size problem elsewhere....

Funnily enough I have a drawing of a Twin seat Naval Strike Fighter version of P.1121 but I think it was studied for US carriers. Picture deliberately small to whet appetites

overscan said:
Funnily enough I have a drawing of a Twin seat Naval Strike Fighter version of P.1121 but I think it was studied for US carriers. Picture deliberately small to whet appetites
Click to expand...

Oh, that's cruel and unusual punishment. Can we have more, sir? :'(

We are always hungry of knowledge ;D
T

Such a gorgeous aircraft! If that's related to this P.1121 writing project of yours, consider my appetite thoroughly whetted

overscan said:
Funnily enough I have a drawing of a Twin seat Naval Strike Fighter version of P.1121 but I think it was studied for US carriers. Picture deliberately small to whet appetites
Click to expand...

Consider mine whetted! Is that the outline of a twin-rudder option on the front view, or foldable wings?

My pictures from the RAF reserve collection at RAF Stafford. The model is around 3-4ft long and easily accessible. 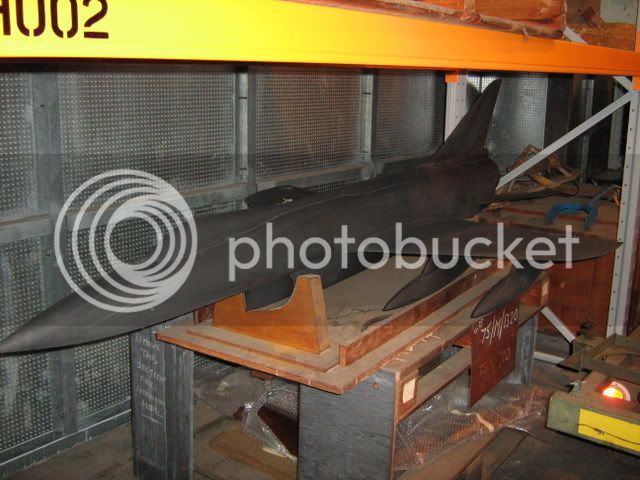 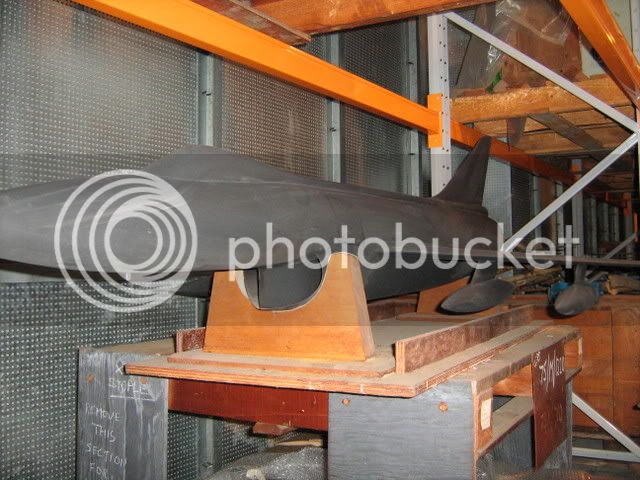 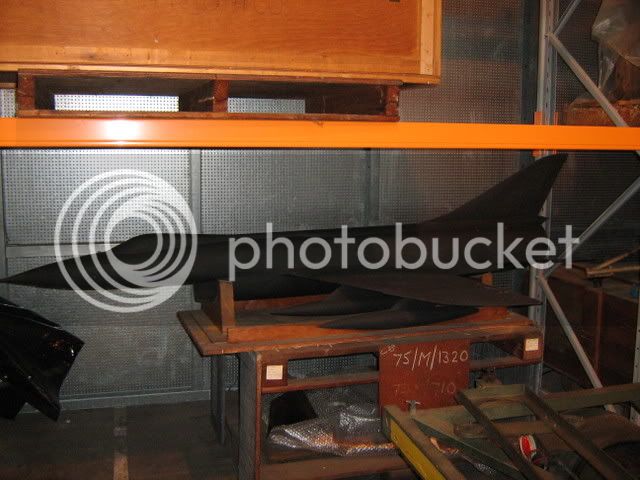 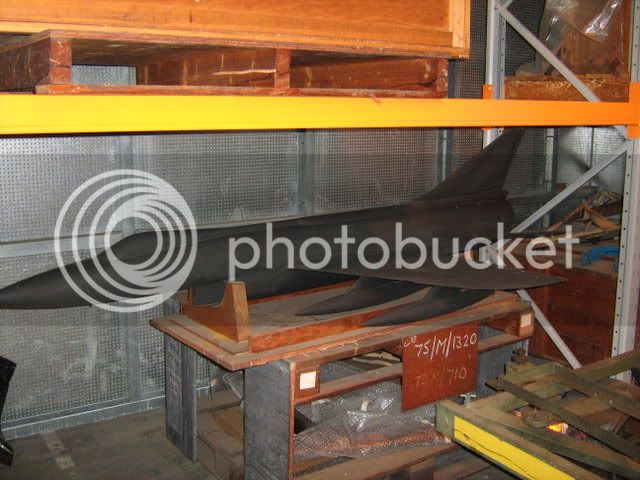 You can teach monkies to fly better than that!

red admiral said:
My pictures from the RAF reserve collection at RAF Stafford. The model is around 3-4ft long and easily accessible.
Click to expand...

Nice! Thanks for sharing those!

Here's a nice pic of the P.1121 front fuselage in the Structures Hangar at Cranfield

Such a beautiful aircraft and despite never flying it fits the maxim of "if it looks right, it'll fly it."

Thanks for the photos Overscan
Z

I can only say...Camm was right.

The P.1121 desk model from Brooklands. This is a real photo of the model, but I removed the background.

A great opportunity lost. Wouldn't the P.1121 have been a British equivalent of the F-105 Thunderchief ?
Z

I think the Thunderchief analogy has some merit actually.
Z

Well in some respects clearly so, since they both use a single large jet engine. Though the P1121 lacks a fully internal weapons bay.

Though the late offering with a blown wing should be less of a runway hog than the Thunderchief.

And presumably comparable to the F8UIII and what was the other one called with the overhead inlet?

I would suspect cheaper to run than an F4 and safer than a F104.
What it lacks of course is the radar missile combination, as any early order would only see the AI23 and Firestreak or later Red Top.

The nose has room for a larger more effective radars. Whether or not the British government would have gone for the upgrade is a different matter.
K

zen said:
And presumably comparable to the F8UIII and what was the other one called with the overhead inlet?
Click to expand...