I'm surprised this does not already have a topic.

HAVE SLICK was the Advanced Dispenser Weapon Technology program. The HAVE SLICK dispenser was a 2000lb-class conformal, stealthy standoff/cruise missile to be integrated with LO launch aircraft. HAVE SLICK was flight tested at Eglin AFB in 1989, program management was by the Eglin Armament Lab under Col. William O'Brien

This program will develop and flight test a 2000 pound class standoff dispenser weapon airframe. The airframe has an asymmetric cross-section to maximize the dispenser's aerodynamic performance. This unique design also allows for very low incarriage drag which improves aircraft performance. The flight control software for real-time guidance, navigation and control subsystems will be written in Ada and executed on a 1750A based microprocessor.
Click to expand...

Will update later with the PE code when I find it in paper archives.
AvWeek at one point published a photo with a conformal shape under an F-111 that was labelled as HAVE SLICK.

This may be a final HAVE SLICK configuration:
http://up-ship.com/blog/?p=7088
I

Dr K A Wise designed the auto pilot for it. He worked for Boeings Phantom Works on the x-45.
I

Long recognized as the most comprehensive reference work available, this volume remains the only complete guide to the weapons currently in service around the world.
books.google.co.uk

HAVE SLICK and a Senior Pennant mentioned in the top book snippet. Also says to look at a future edition for more details.

quellish said:
This may be a final HAVE SLICK configuration:
http://up-ship.com/blog/?p=7088
Click to expand...

Unearthed some very old information on the HAVE SLICK configuration that rules out the above, but...

And here it is.

This may be related, may not be.

GeorgeA said:
A terrible version of the first graphic appears in somebody's Air War College thesis. I'm scanning the hideous mess that is my hard drive for it.
Click to expand...

Apparently the airframe of the McDonnell-Douglas AGM-159A losing JASSM contender was based on their HAVE SLICK study.

A MISSILE BASED on the US Air Force's previously classified Have Slick weapon has been submitted by McDonnell Douglas (MDC) for the Royal Air Force's conventional stand-off missile competition (CASOM). The surprise unveiling of the Grand Slam Plus during a two-day lobbying campaign in London revealed a weapon which is substantially more stealthy and 530mm shorter, but with a larger cross-section
and almost double the range of the baseline Grand Slam.

The Have Slick was cancelled in the early 1990s, but not before the conformally carried weapon underwent a series of test flights from a General Dynamics F-111. The US company put in the new bid in February, when it became clear that the original Grand Slam offering, even with the man-in-the-loop guidance option removed and fuel tankage increased, was falling behind rival bidders offering the
near-600km (320nm) range desired, but not specified, by the RAF. Grand Slam Plus (top) outdistances MDC's original bid (below) Release of the weapon for public scrutiny has been delayed by commercial
and military sensitivity surrounding the MDC bid for the USAF/US Navy Joint Air-to-Surface Stand-off Missile (JASSM) requirement. Much of the work undertaken for the Have Slick and Grand Slam Plus is reflected in the company's US offering. The Pentagon has decided on the two contractors to be awarded parallel development contracts and an announcement was expected bv 18 June. As part of its UK industrial participation programme, MDC is now guaranteeing that UK companies would supply 25%, by value, of its JASSM missile should it be selected. Equipment in contention for inclusion is headed by a GEC Marconi imaging infra-red seeker similar to that on the Grand Slam.

In the meantime, the RAF is expected to to select from a field of seven contenders by 23 July. MDC chances have been revived by the introduction of the Grand Slam Plus, although the original missile bid, which is cheaper, also remains on the table.

The trapezoidal-shaped Grand Slam Plus has a length of 4.7m and weight of 1,335kg, about 90kg heaver than in the original bid. The subsystems remain the same and the range is constrained only by international arms-limitation agreements — a factor which will need to be resolved if a variant of the weapon is to be widely exportable. 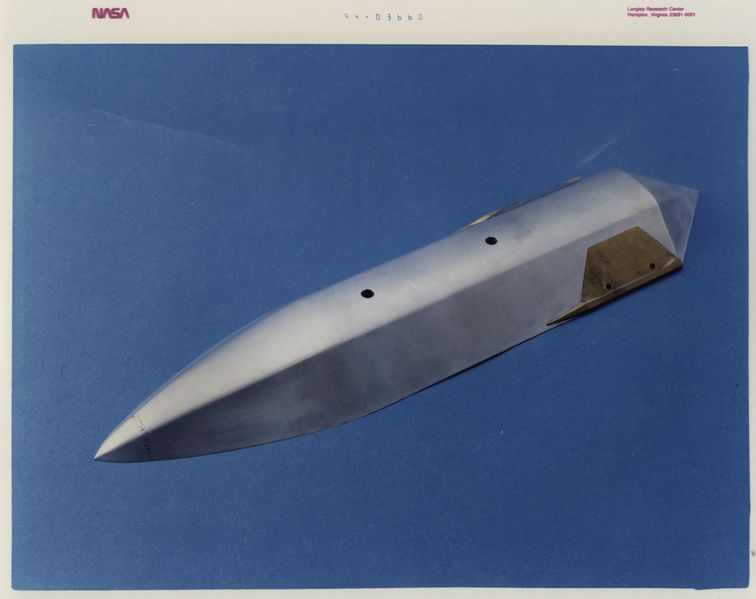 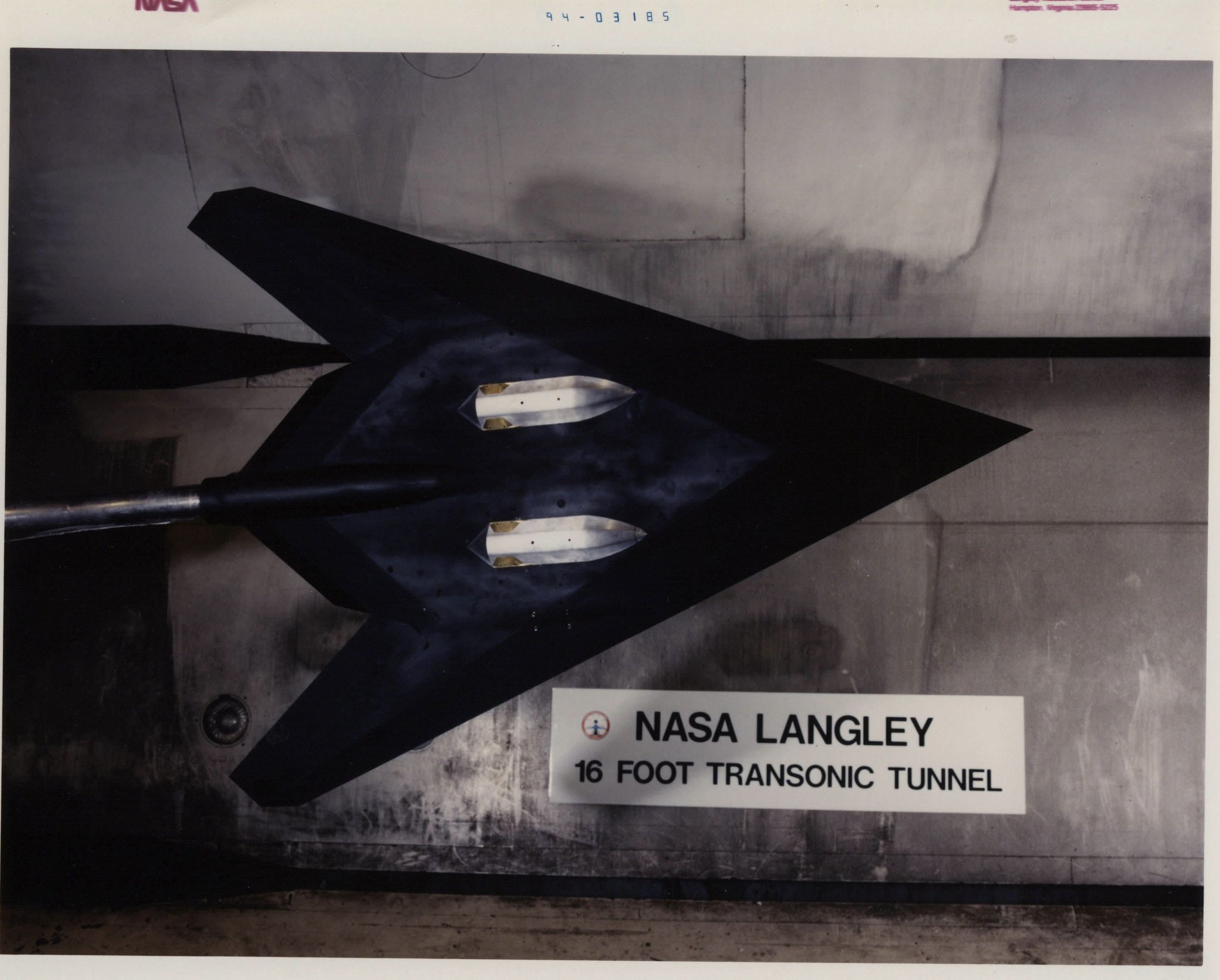 So basically they would have been bolted to the outside of the weapons bay doors?

Incidentally, the F-117 was considered as a JASSM carrier (internally) for a time, I think they got as far as physical form-fit trials in the pylons.

Just want to say that exactly these photos were in the Orionblamblam's blog entry linked in the first post of this thread. It was back in 2010. I wonder if Scott can do something with disappearing photos...
F

JFC Fuller said:
So basically they would have been bolted to the outside of the weapons bay doors?

Incidentally, the F-117 was considered as a JASSM carrier (internally) for a time, I think they got as far as physical form-fit trials in the pylons.
Click to expand...

I think the earlier AGM-137 TASSM was intended to be carried internally, as was the AGM-131 SRAM II.

Flight tests are set to begin this month on the composite-skinned Have Slick missile, a U. S. Air Force stand-off weapon expressly designed to blend into the shape of stealth aircraft. The missile may prove to be the forerunner of a new class of air-to-ground weapons conceived to supplement the relatively small, internal weapon loads of such aircraft as the F-117, A-12, B-2 and advanced tactical fighter (as the ATF evolves an attack mission).

Have Slick is designed to avoid the detrimental effects of externally hung conventional weapons on the flying characteristics and radar signature of stealth aircraft. After launch, these fast, stand-off weapons would cruise a battlefield searching for targets and dropping submunitions with great precision. However, the Pentagon likely will give little overt attention or funding to such weapon programs until after the next generation of stealth aircraft (ATF, A-12) are in service, an official said. The Defense Dept. does not want its congressional critics to know the missile necessary to make stealth aircraft truly formidable weapon platforms has yet to be built and paid for.
By the end of July, the Air Force will start launching Have Slick missiles—a 14 x 2-ft., 2,000-lb.-class weapon—from an F-111E, service officials said. The air drops will closely follow a series of captive carry tests.

Primary goal of the $13.2-million project is to create a low—drag weapon. Existing bombs and missiles and their pylons slow an aircraft, shorten range and hinder the ability to evade enemy fighters and antiaircraft weapons. While a contemporary 2,000-lb. weapon mounted on an F-15 will increase the fighter’s drag by about 25%, the Have Slick should increase drag only 2.5% by eliminating blunt, extruding shapes, an Air Force official said.

Details of Have Slick’s “complex” shape are classified, but it is known to have four control surfaces on the tail and a flat underside that functions as a lifting surface or wing. The flat belly also serves to mount the missile flush with the aircraft’s skin for conformal carriage, Aaron Brinson, chief of the flight vehicles branch of Munitions Systems Div. at Eglin AFB, Fla., said. For Have Slick tests, the F-111's bomb bay doors were removed and the aircraft was fitted with a conformal ejection rack. Two high powered pistons will kick the missile away from the aircraft.

Using the fuselage as an airfoil requires an aircraft-type autopilot that can bank Have Slick through turns rather than skidding it like most missiles, Brinson said. The resulting ability to conduct high-g maneuvers will give the missile great agility. A Have Slick-type missile should be able to fly 20 mi., perhaps many more, to its target areas at supersonic speed and then slow for better accuracy, an Air
Force official said. After dropping its submunitions in one or more target areas, the missile would crash into the ground and be destroyed.

Except for some problems with the electrical interface between missile and aircraft, the captive carry tests went as expected, Brinson said. The subsequent series of 6-10 free flight tests should be completed in September. The F-111E will drop Have Slick missiles at speeds ranging from Mach 0.6 to 1.05 and altitudes from 10,000 to 4,500ft., he said. Originally, program officials had planned to test the missile at a top speed of Mach 1.6 but usable space on the Eglin ranges forced a reduction in the test envelope, an official said.
At the end of flight testing, administrators of the program will turn to analysis of the data and validation of their simulations, Brinson said. If the advanced materials and shaping, technology and conformal carriage of the missile prove themselves, they may be incorporated into the next generation of airborne stand-off weapons, scheduled to begin development in Fiscal 1993-94.

In addition to agility and speed, Have Slick missiles are made of light, extremely tough glass fiber-epoxy and graphite-epoxy composites in a shape that is less visible to radar than traditional weapons, Brinson said. With strength concentrated in the skin, designers can eliminate internal bulkheads and other supports that drive up missile weight. Only the missile’s spine, or strongback, is made of metal to ensure it withstands the shock of ejection pistons, but in a production model it too may be made of composites, officials said.
Have Slick was described as a “shotgun shell” that can be tightly packed with a large range of submunitions. The composite-skinned missile will carry more than half its weight in ordnance, about 1,200 lb. or 50% more than existing cluster bombs and other aerial munition dispensers, an Air Force official said.

The missile’s design would allow carriage of two Have Slicks on an F-16-size aircraft and four on a larger F-15E—size design, an Air Force official said. While Have Slick missiles could be fitted to these older aircraft, the size and weight of the launchers would dictate its primary use on newer aircraft such as the F—117.