The Harkness & Hillier "All Australian", designed by T. Leech and L. Jones, was engaged in the Mac Robertson England-Australia Air Race in October 1934.
The aircraft was not ready in time.
What is the final fate of this aircraft after the race???
I just found a front view drawing but no 3V drawing.

Wonderful twin-boomer, standing as the missing link between P-38 and Burnelli family... (half central pod, half lifting body). Thanks a lot! ;D

Retrofit said:
What was the final fate of this aircraft after the race. Did she ever flew???
Click to expand...

In 1933 Jones and T.D.J. Leech designed an aircraft to compete in the 1934 MacRobertson London to Sydney air race (MacRobertson International Air Races). The aircraft was to be powered by two high compression "Harkness Hornet" engines, each producing 150 hp. It was hoped that the project could be completed through public donations and the construction was begun in the sporting department of Grace Brothers department store in Sydney to ensure public awareness but insufficient public donations caused the end of the project.
Click to expand...

From the following website (which describes in detail the two Harkness "Hornet" engines scheduled as powerplants for the racer):
http://www.dhub.org/object/208620

I am still looking for a 3V drawing.
K

Under construction at the Grace Brothers store in Sydney.

According to Francis Roy Chappell, the Sidney-built Harkness Hornet 4-cylinder engine was originally expected to produce 250 hp (190 kW). Construction of the All-Australian was begun at a Grace Bros department store (presumablt the Broadway building) "but later transferred to the Tugan Aircraft Company hangar at Mascot."

The All-Australian's performance is listed as 200 mph cruising speed, 120-140 gallons of fuel, range of 10 hours continuous flying (or 1,600 mile stages). The Harness Hornet was developed from one cylinder bank of an Hispano-Suiza V-8.

Recording Engineering Heritage: The work of L.J.R. Jones by E.D. Daw has an interersting list of contemporary publications: http://consuleng.com.au/Recording%20Engg%20Heritage%20(Daw%201992).pdf
K

Great find Apophenia. Interesting that it was called the "Centenary Racer".

Have attached more photos I found in one of the Australian document archives. 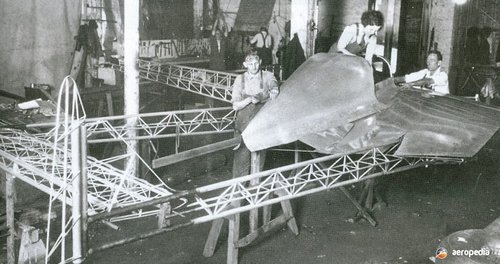