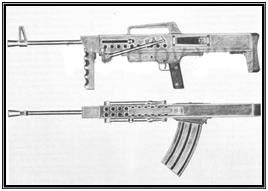 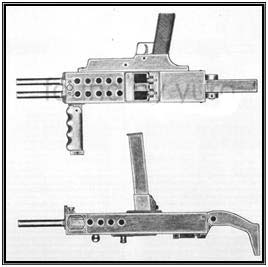 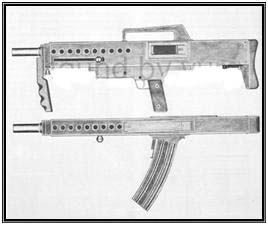 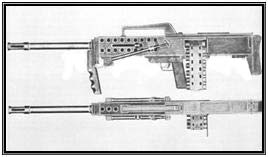 A very unusual weapon system was proposed at one time Australian Duncan Gordon. It was assumed that the basis of this family of automatic weapons constitute a belt fed machine gun, automatic shotgun with box magazine and the double-barreled submachine gun with overhead inserted magazines (A la Villar-Perosa SMG) is very unusual configuration. Gordon has developed its weapons, based on personal combat experience gained in Vietnam, where he served in the forces of SEATO. Design drawings and the general conception of his ideas involved in the Australian company BSP Planning and Design Pty. Ltd. in Norwood. Led the team of engineers, Peter Chant. Work began in early 1970.

The system was developed by 1972, and drawings were accomplished engineer Dale Evans. This system was a quick-barrel weapons, while the overall configuration has a mixture of ideas of the British EM-2, as well as WW2 platforms such as the German FG-42 and the American M1941 Johnson LMG. Any type of weapon could be adapted to fire as the conventional rifle cartridge and a 12 caliber bullets. Automation system, applied in the arms of an identical pattern of patent 1.834.021 J. Destree, and used to solve problems by firing rifle bullets and shot with the same weapons sites.
Click to expand...

Do my eyes deceive, or is that SMG double-barrelled, over & under ??
F

Nik said:
Do my eyes deceive, or is that SMG double-barrelled, over & under ??
Click to expand...

I don't think so, because mine also detect two mag shafts.
R

I sincerely doubt that he served in SEATO forces in South Vietnam as SEATO was not a part of the Vietnam War (indeed, while South Vietnam was named an "area of special interest" in the SEATO treaty, SVN was neither a member nor was it considered to be part of the triggering clauses which would activate the treaty). It is a common misconception that Vietnam was a SEATO conflict.