by Dwayne A. Day

On October 23, 1962, the skies over Cuba were cracked open by the roar of Navy RF-8 Crusader reconnaissance aircraft flying at high speed and very low level. A little over a week earlier, a high-flying U-2 reconnaissance plane had photographed unusual activity on the island. The U-2 photographs had been alarming enough to initiate a major crisis. But what they revealed was hard for untrained people to interpret, and so President John F. Kennedy had authorized risky and provocative low-level reconnaissance flights. Now the Crusaders were screaming over the scrub with their side-looking cameras peering at the various structures and vehicles that dotted the terrain, far closer than the high-flying U-2. When they returned to Florida and their film was processed and looked at by trained human eyes—and even untrained human eyes—it was clear to everybody who saw them that a very serious problem existed not far from American shores.

By 1968, with both the HEXAGON and the Manned Orbiting Laboratory (MOL)/DORIAN reconnaissance satellites under development, the National Reconnaissance Office (NRO) had its hands full working on the next-generation satellite reconnaissance systems. Both spacecraft were big—requiring powerful Titan III launch vehicles to put them in low Earth orbit—and both were also complicated, expensive, and over-budget. So it is surprising that amidst all this work, some within the NRO began discussing developing yet another photographic reconnaissance satellite program, one which remains relatively obscure and little known even today, over five decades later. This program was known as the “Very High Resolution” or VHR reconnaissance satellite, and at least one iteration appears to have been referred to by some as HEXADOR, as a combination of HEXAGON and DORIAN hardware. VHR was supposed to take the kinds of photographs that the RF-8 Crusaders had taken six years earlier, but in areas of the world that no Crusader could fly.
Click to expand...

by Dwayne A. Day

People who work in the intelligence community do so with the knowledge that they will probably never be able to tell their friends or family what they do. This is certainly true for those who build and launch and operate highly classified reconnaissance satellites. Right now, across the United States, there is probably a group of engineers sitting in a secure conference room going over the design specs of a new satellite, or a technician attaching circuit boards to an electrical system, or an optical engineer measuring a high precision mirror—in Los Angeles, Denver, Rochester, Mountain View—and yet they cannot tell anybody what they are doing unless that person also has a top security clearance and is in a secure facility.

“Hi honey, how was work today?”

When the men (and few women) were building the first-generation reconnaissance satellites in the 1960s, they also operated under severe restrictions. They knew that they couldn’t tell their friends and families what they did, and they also believed that they would never see the systems they worked on declassified. Many of them probably assumed that when a project was finished, all the records and leftover equipment would be destroyed. And in fact, some of that was true. There were over a hundred CORONA reconnaissance satellites that operated during the 1960s returning their film to Earth in (literally) gold-plated satellite recovery vehicles, and today only a handful of those recovery vehicles remain. What happened to the rest of them? Air Force security personnel punched holes in them with axes and threw them out of a C-47 airplane off the California coast because the vehicles were classified. Even as junk, they were still too sensitive to send to a junkyard.

Surprisingly, in 1967, somebody in the National Reconnaissance Office had an idea to save something for posterity, meaning the day when it might be declassified, whenever that was. In August 1967, Director of the National Reconnaissance Office (NRO) Alexander Flax asked the Commander of Strategic Air Command—which had responsibility for Vandenberg Air Force Base—to implement Project Van Winkle, the long-term storage of two KH-7 GAMBIT-1 high-resolution reconnaissance satellites, which the NRO no longer planned to fly now that the more powerful KH-8 GAMBIT-3 was in operation. Flax also asked that the SAC commander “ensure that each succeeding commander of Strategic Air Command and commander of Vandenberg Air Force Base be made aware of Project Van Winkle and all restrictions related thereto.”
Click to expand... 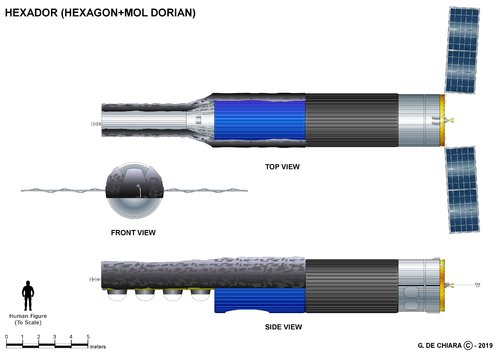 Note that this is speculative. It includes the HEXAGON bus (far right) the MOL/DORIAN optical system the gray tube and the blue part, and the HEXAGON forebody containing the satellite recovery vehicles. If they had proceeded with the program, it could have had fewer SRVs, or mounted them in a different manner. But the initial concept was to use as much existing equipment as possible.
You must log in or register to reply here.
Share:
Facebook Twitter Reddit Pinterest Tumblr WhatsApp Email Link
Top