The Fouga Magister was the final development which actually started
with the jet powered CM.8 Sylphe and its derivatives.
The CM.82R Lutin was a try, to find a military marked for a very light
jet in the attack role ( Photo : Les Avions De Combat Francais 1944 - 60,
Jean Cuny)
The "Projet Centaur" and CM-130R were already mainly envisaged for the
training role (drawings from : Planeurs et Avions, Christian Castello, le Lerard).
As a contender to the Castel-Mauboussin/Fouga designs the Morane-Saulnier
MS.752 was mentioned, which started as a derivative of the MS.733 Alcyon
piston engine trainer, powered by two Marboré engines . Anybody, who has
a picture/drawing of this project ?

About two years ago, I made some copies from "Planeur et avions, du Dewoitine D.520
au Fouga Magister CM.170", unforunately just some pages, not the whole book.
Quite a lot of it can be found on http://pletav.free.fr/ , but not all.
One Magister follow-on project I've found in this book, is the CM.178, basically still a
Magister, but powered by two Astazou turbo props and proposed not only as a trainer,
but in a dedicated attack version, too.

I heard that there was a project from Fouga CM.170 called
CM.195 with swept wing and also two seat,does anyone
hear about it ?!.

Hi folks - I've been doing some on-line research about Magisters for what I thought was going to be a "What If" model of a swept-wing one : and I came up with a whole bunch of interesting stuff. Can anybody shed any light on any of these? 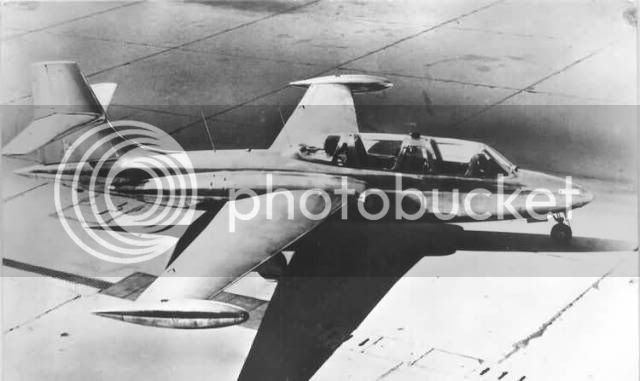 2. The CM 171 Makalu. All I can find on this apart from the pics is a single line to the effect that it was a high-altitude version. 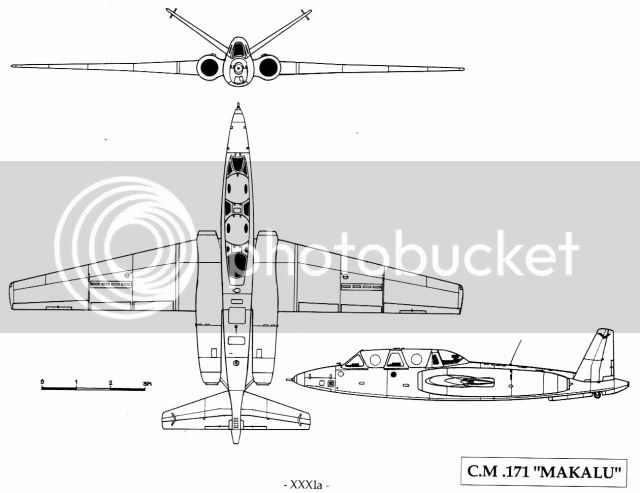 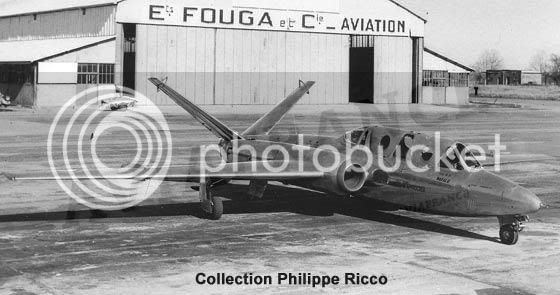 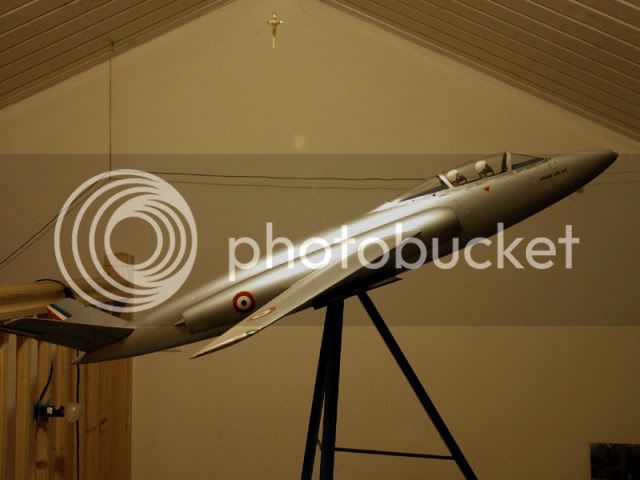 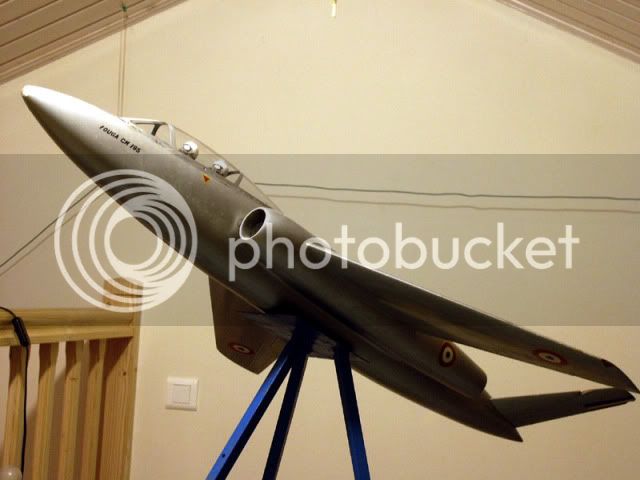 Makalu sounds very Turbomeca (surely a Pyrenean peak as usual with the firm!) so I suppose it was an engine upgrade...

Mt Makalu, Tibet, is the 5th highest mountain in the World, Google told me.

Makalu sounds very Turbomeca (surely a Pyrenean peak as usual with the firm!) so I suppose it was an engine upgrade...

Aha - cheers Archi. Maybe looking into it from the Turbomeca angle would reveal more then? I shall have a go when I get time.

The CM-195 is indeed very pretty. It's also remeniscent of the various Supermarines that led up the Scimitar: 525 wings with a swept 510 tail? Tell you what though, the crew look a bit too "cosy" for comfort, don't they? The pupil is practically sitting on the instructor's lap......
A

Makalu is not the turbojet, its the aircraft itself. MA-kalu = MA-gister (I suppose)

The plane itself was powered by Turbomeca gabizo, an engine I already met various times.

The Gabizo was a 1100kg thrust turbojet, intented to power the Armée de l'air light/ transonic interceptor of 1955.

Competitors were the Etendard II (or VI, can't remember which one had the Gabizos) and Breguet Taon.
The gabizo also powered the Mirage II.

The engine soon proved utter crap, hence the three fighters above had to swap it for better engines.

NATO imposed the Bristol Orpheus for the famous contest won by the Fiat G.91.

Never heard before they had modified a Magister to test the Gabizo!

It proved very difficult to fly; handling had been badly degraded by the superior thrust of the Gabizo.

Fouga and Turbomeca pilots cautiously learn how to master the beast; but the plane was soon transfered to the CEV in Istres. It tragically crashed there, in march 1957, killing the crew.

Seems that the CM-171 was testbed for the high performances CM-195.

"...the C.M.191 four-seat liaison aircraft is not likely
to be built, but that the C.M.171 is a test aircraft for a projected
twin Gabizo-powered, swept-wing, butterfly-tailed trainer called
the C.M.195. On the C.M.170 it was impossible to notice any
strange effects at all from the butterfly tail, and one can hope
that the C.M.195 will be the same. The navalized version of the
C.M.170, bearing the suffix letter M, is now being built. Apart
from the addition of a tail hook, the two canopies will be jettisonable
in one piece, the oleos longer and some items of equipment
different. Undoubtedly the Magister is an excellent aircraft, and
the fact that a considerable production order has been placed, and
a NATO recommendation conferred, should encourage the company
to repeat their initial success."

Good find, special thanks for the model photos of the CM.195.The version with
the conventional tail actually was the second prototype, often reffered to as
CM.170R-02.
Recommended reading about the whole theme of Fouga aircraft is Christian Castello
"Planeurs et Avions"

I can imagine that three times the thrust would push the Magister into a high-mach regime where it's gliderish wing was never supposed to go. However, the Makalu's wing was clearly completely re-designed, so why didn't they adopt something more suitable? It looks like a high-altitude wing, and the solid canopies look like an attempt to prevent them from bursting at high differential pressure, so overall, it still looks like a high-altitude project. Perhaps testing the Gabizos was combined with some other project in the same airframe, possibly to the detriment of both?

Found some very scant references to another version now: CM-176 close support version, with 2 x 20mm HS-404 cannons and 18 rockets. No pics that I can find.....

LMFAO - there's nothing new under the sun is there? My other whif model project is a single-seat Magister along the lines of the Mb.326K - mine will have a shortened original-style cockpit like the 178, and I even correctly guessed that it would have to have 20mm cannons because it couldn't handle a pair of DEFAs...... ;D ;D ;D

I thought the CM.175 was the Zephir navalised version though? ???

Do you mind if I post your pictures over on the What If? Modellers site? (with credit, of course) I'm sure they'd be fascinated.....

AFAIK, the Zephyr started as the CM.170M and was later re-designated as CM.175,
so the artist impression may be made before the navy used the Magister ?

But I found a hint about the CM.176 (I just put my glasses on ... : )
If I understand it correctly, it was a study with a thicker wing, which could have accomodated
a longer undercarriage .
Another mentioned project, without designation is a light transport/communications aircraft for
8 to 10 passengers. t should have been powered by two Bastan engines, situated on the
butterfly tail. Sounds interesting !
The pictures are from the book by Castello, so of course, I cannot give permission to use them. It's
up to you and to the rules in the What-If site.
But if you send me your mail adress via PM, I can send you a higher res picture.
A

Daring Israelis used their Fougas for ground-attack in 1967, when 95% of their true fighter bombers were committed to the "preemptive strike"...
S

The caption says the Lutin (elf in French) was to be powered by two Turbomeca Palas turbines.

It would be really interesting to know the CM-195's specifications. Perhaps Cuny says anything on this?

Strictly NOT historical, but I thought you might like to see the models I built as a result of the questions I was asking on this thread: Petrus said:
It would be really interesting to know the CM-195's specifications. Perhaps Cuny says anything on this?

I would love to see those too. The line drawing on the previous page shows it sitting close to the ground in very fouga-esque fashion. However, I have heard that the 195s wings were much thicker in part to accommodate a larger undercarraige. This was to lift the aircraft to allow easier weapons access aparently.

I have two more pics which represent the same prototype in the same place (all three pics are probably the same one reworked). They were taken at the Grand Palais in Paris for the Salon de l'Aviation (before it moved to Le Bourget for good in 1951).

Thanks Stephane....
And an happy new year.
Paul

As I understand it, the CM.82R was a development of the CM.8R Sylphe/Cyclope
and not strictly meant as ground attacker, although shown with armament.
Tried to make a drawing a long time ago, using those photos and the CM.8 as
a pattern, should be taken with a pinch of salt ...

Years ago I took copies of the Flugwelt 1995, showing, what seems to have been a model
of the Fouga 191 "fast communications and courier aircraft". To my opinion, here it already
has the seating arrangement later realised in the Potez-Heinkel 191 ( 2 + 2)
(It wasn't me, who cut the tail off, but those mags were bound into one volume, often leading
to "losses" at the edges)

Why I really should change my personal text?

One friend of mine mentioned that Fouga had quite small radar cross-section. He didn't find any source for his recollection about this.

Does any of you have any information on radar cross-section of Fouga Magister? Would it be close to modern low observation aircraft like Rafale or Typhoon?
A

The Fouga was a pretty diminutive aircraft with a very small frontal area. It may have helped diminishing radar returns. Surely that data must come from the ISraelis, one out of few countries that used the Fouga in combat (in the Six days war).
S

The Magister is too well known to need description, but a projected development, shown in model form, is very interesting indeed. This is the C.M. 195 transonic operational trainer, which Fouga is pushing as an economical way of giving advanced air experience to fighter pupils. It is virtually a Magister with 45-deg. swept wing and tail of reduced thickness and two 2,430-lb.s.t. Turbomeca Gabizos in place of the 880-lb.s.t. Marbores. The estimated gross weight is 9,700 lb. A sea-level maximum speed of 600 m.p.h. reduces to 560 m.p.h. at 33,000 ft., but the important feature is that a Mach number of 1.1 can be reached at 26,000 ft. after a dive from 42,000 ft.
Click to expand...

Also, many of the pics of the C.M. 195 have disappeared from this post, so here is the one that came with the above item:

A fantastic article (in Spanish) about Robert Castello and his many designs for Dewoitine, but mostly Fouga, can be found in Aeroplano #24:
www.ejercitodelaire.mde.es/ea/pag?idDoc=E1583E811153C570C125770C002DA884

Thanks for your help.
Maveric

The following chatty text may be of interest even though the link with the Magister is on the tenuous side. I love the clouds… the clouds that pass… over there… over there… the marvelous clouds! The Établissements Fouga et Compagnie and its jet-powered gliders | The Channel