Folland E28/40 was torpedo bomber monoplane with a variable-
incidence wing,not completed and Folland F19/43 was a fighter
with a 2,500 hp Bristol Centaurus XII and contra-rotating airscrews,
project only, do you know those aircraft?and any drawings to them
please.

but what about the anther aircraft for E28/40 Specification,it had a variable-
incidence wing look like Gourdou G-90, any informations about it please.
A

The hardest word to define is 'Normal'

Folland E28/40... I have a drawing of that aircraft (unfortunately, not right now ). There's a book I bought entitled 'British Prototype Aircraft' and is the only aircraft they included in the section for Naval aircraft was this machine, complete with three view. As soon as I can dig it out, I'll scan it. But if you can find that book, that's where it is.

I have not that book,but do you know the number of Folland design Fo---?.
S

see also
http://stinet.dtic.mil/oai/oai?&verb=getRecord&metadataPrefix=html&identifier=ADA951968
for a report on the aerodynamics model tests, dated 1950!

I'd love to see a three view Smurf!

and do you know the other contenders in this specification E28/40 ?.
S

E28/40 was an 'experimental aircraft' spec, issued to Folland, not put out to competitive tender as volume production was not expected.
'Spirit of Hamble Folland Aircraft' by D.N. James has a list of Folland project numbers, listing three for this aircraft: Fo 115 1940 with Sabre; Fo 116 with variable incidence wing and 2400hp Centaurus; Fo 116A as Fo116 with Centaurus III, March 1942.

Thanks Smurf - are the two books mentioned 'Spirit of Hamble Folland Aircraft' by D.N. James and 'British Prototype aircraft' any good?
S

are the two books mentioned 'Spirit of Hamble Folland Aircraft' by D.N. James and 'British Prototype aircraft' any good?
Click to expand...

Oh, dear. One man's meat is another's poison.
Folland. 128pp A5ish. It's a history of the company rather than of its aircraft. Lots of photos many of production lines etc, but not on art paper. Heavy emphasis on Gnat and unflown derivatives, of which about 8 3-views. Only about 3pp before you get to the Midge. No index, but so far as I can see no mention (apart from the list) of either Fo116 or Fo117. You get 1 to 2 lines on each project, as I posted.

British Prototype Aircraft by Ray Sturtivant
200pp, A4 again not art paper so photos not quite at their best, but generally good clear and an unusual selection. First 50pp pre WWII, so covers the ground, but coverage patchy. So the chapter on Naval Aviation research has Fo116 with 3-view I've not seen elsewhere, then goes straight on to rubber decks and Vampires but no mention of Supermarine 508 there, nor anything at all re progress to Scimitar. With one or two odd exceptions, it's stuff that did fly. There are things in it that are rarely seen, but it's not at all a complete survey.
I'm a bit of a bookoholic, or I probably would have relied on the library for these two. I didn't buy them new.
S

Hood on another thread has reminded me of the Project Summary in Tony Buttler's book British Secret Projects Fighters and Bombers 1935-1950. There you will find a lttle further information and a photograph of a model of what it says is the Fo 116, but again is clearly the Fo 115 with Sabre engine.

Found this one FlightGlobal

The E.28/40 was a High-wing monoplane of all-metal construction, with fixed and "spatted" undercarriage. Its most unusual feature was that the wing was carried in trunnions so that its angle of incidence could be varied from 4 deg. to 79 deg. The latter angle was, of course, only to be used when the wing was folded. Variation of incidence in the flying range was from 4 deg. to 15 deg.

red admiral said:
There are 2 pictures of the Fo.117 on Flitzer's site.

I think these two are what you were referring to.
P

Hi!
https://p-d-m.livejournal.com/66554.html
"Folland Fo.116
E.28/40 specification.
The specification provided for the creation of an experimental aircraft, the purpose of the experiment was to confirm the possibility of take-off and landing of a heavy aircraft from the deck. It was implied that at its base in the future it is possible to create a full-fledged combat aircraft: torpedo carrier, bomber and reconnaissance.
The main feature for which the specification was created was a wing with advanced mechanization and a variable angle of attack. By the way, according to the specification released earlier (S.24/37) supermarine Type 322 Dumbo was also created with a wing with a variable angle of installation.
The Folland wing could change the installation angle from 4 to 79 degrees, it is natural in the parking lot, for subsequent storage in the hangar.
In flight - from 4 to 15 (Supermarine 322 from 2 to 15).
The wing structure was "spun" on a spherical bearing with the help of an electric drive.
Like the Dumbo, the Folland aircraft was a three-seat high-wing aircraft with a fixed landing gear.
The engine is a radial air-cooled Bristol Centaurus III of 2400 hp. And you can't tell from the picture - this generally pretty healthy engine was installed in a very intricate way, as much as 1400 mm in diameter.
If the Supermarine Type 322 Dumbo was built in two copies and one of them flew until the end of the 40's, the project Fo.116 was abandoned in 1943, the first prototype aircraft remained unfinished.
Length - 13.4m
Wingspan - 15.9m.
Maximum take-off weight - 8280kg
Top speed - 423km/h
At altitude - 3000m
Cruise speed - 370km/h
Range - 1290km
with a fuel supply of 1637L"

The Centaurus in the Fo116 used some form of fan-assisted reverse-flow cooling system, but I can find no details on how this functioned. The installation is tightly cowled, hence why some have mistaken it for Sabre in the Fo115 (for example in the model of the Fo116) 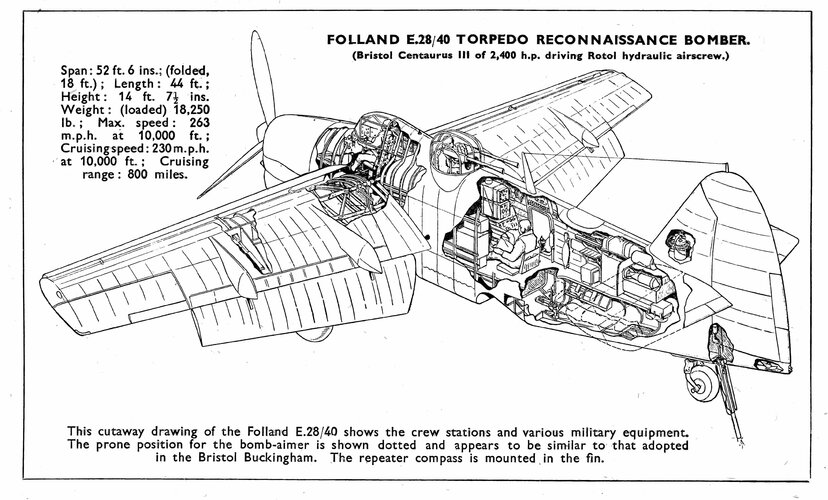