Soon followed the decision GFCS, which plant manager № 456 T.H.Filimonchuku and chief designer A.P.Golubkovu instructed to convert Li-2 under the minesweeper and present it to the flight test June
1, 1944.
After the war, by the summer of 1946 at the plant 456 Ns remade two copies Li-2 variant Li-2MT.
By order of the NCAP for number 411 of 29 June 1946, signed by Yakovlev, the director of the plant
№ 30 P A.Voronin and chief designer of the OKB-30 Golubkov were required in July of that year to
check the main data experienced minesweeper. First - the airfield FRI, by the staff of the flight test station plant. And then bring Lee-2MT professionals Naval Air Force. Test pilot aircraft assigned P.E.Genaeva. The results of these tests, the authors not yet known.
By 1951, built a prototype Li-2MT with two engines AL-82FN. Draft design of the aircraft was approved December 20, 1949 A device for trawling is a coil diameter of 15.45 meters, consisting of 56 turns of aluminum wire with a diameter of 15 mm. DC generator created 250 V, maximum current equal to 480 A. The generator is driven by an auxiliary aircraft engine M-14 capacity of 225 liters. with. Range with a maximum take-off weight of the aircraft was 715 km. Thus, in a single flight of about three hours Li-2MT to process strip the water surface length of 300 km. On the flight test information is available.

Interesting find ! It's an exact copy of the Junkers Ju 52 MS (without any depreciation), codenamed "Mausi"
(mousie) and used from 1940 onwards. The Li-2 may have had the benefit against the Ju 52 of an easier and
more robust attachement of the ring, due to being twin engined.
(Drawing from http://www.luftarchiv.de/index.htm?/gerat/ms.htm )

Blohm & Voss fitted degaussing rings to some of their aircraft too:

Wow,thank you my dears Jemiba and Arjen.

Found another one:
Vickers Wellington DWI 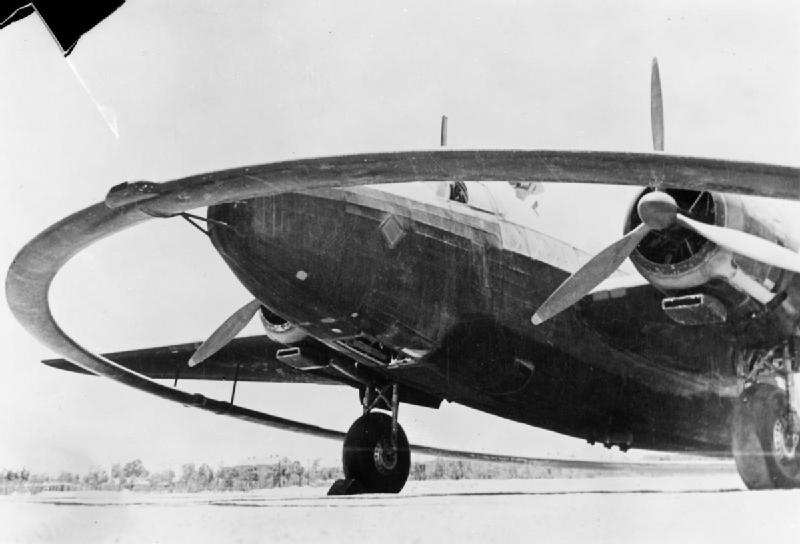 The LeO 451 is absolutely new to me in this task. The paint scheme on the cowlings suggests,
that it was used by the Vichy French airforce ?

LeO 451 No.359 of the Aeronavale's Escadrille 6B was experimentally equipped for mine-sweeping, and first flew in this form on June 3, 1942 at Tafaraoui-Lartigue.

There is a very nice 3-view by Dennis Punnett in William Green's 'War planes of the second world war - Bombers and reconnaissance aircraft - Volume eight', I'll post it in a few days.

<edit2> first flight as cited in William Green's book.
A

Also a color profile in Aerojournal, number "I can't remember" (but there were not many Aerojournals, much less than Air&Cosmos !)
T

However I'm a little confused as to whether it should remain in the Postwar section or move to the Early Projects section...
T