The 1916 experimental V-12 airplane engine was a 24-valve engine with the walking- beams on the inside of the vee under aluminum covers. 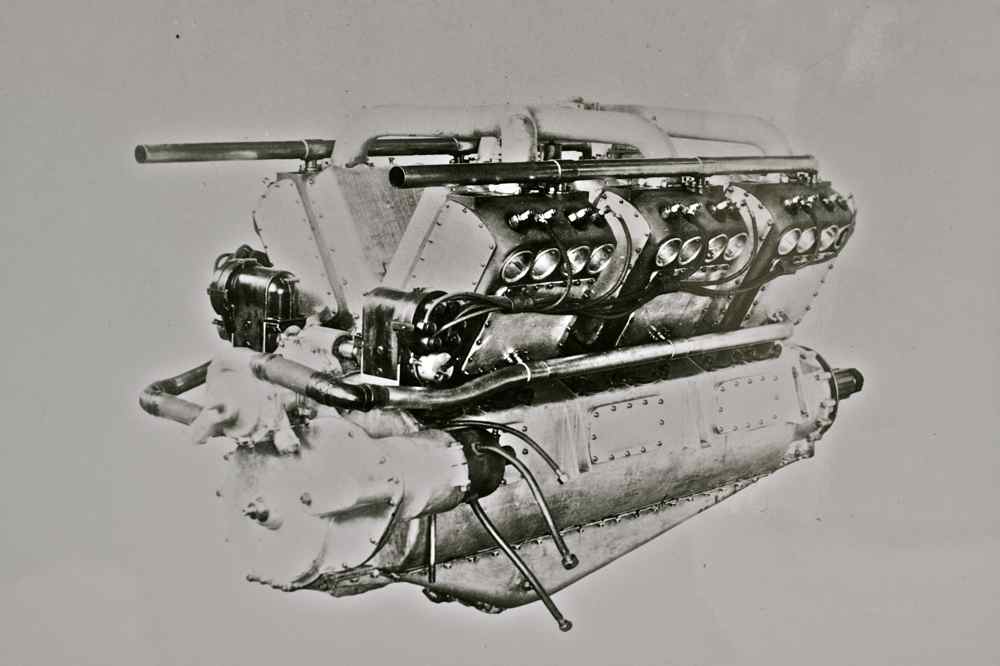 This engine was a 4 7/8″ bore x 7″ stroke displacing 1568 c.i. and it produced 350 h.p. at 1800 rpm. This one-off engine was displayed at the 1917 National Airplane Show, but no attempt was made to develop it after further testing revealed problems attributed to the basic V-12 engine configuration. The magnetos they chose to use are Bosch and the carburetors are up-draft Scheblers.
V-16
This engine was the result of a developmental contract awarded to the Duesenberg Broth-ers in 1918 to build the largest and most powerful aero engine at the time. They had previously built a V-12 engine which we have looked at earlier along with a four cylinder walking beam airplane engine quite similar to this racing engine we have looked at. This new engine was quite a ingenious and light weight power-plant in which they incorporat-ed new ideas along with practices that had worked well for them previously. They also adapted other clever design ideas like the forged steel cylinder barrels along with forged and built up cylinder head. This had been used by Mercedes in racing and road car engines.
It featured one intake valve at the top and two exhaust valves below it in a verticle com-bustion chamber, actuated by their walking beam system. It carried an air starter, two separate ignition systems with both magnetos and battery distributors and it used four Miller updraft carburetors. It was a very large sized engine, as you can see by comparing it to the helper in the photos. It was a monumental sized 3393 c.i. (55.6 litre).
The engine was tested extensively both on this test platform and also in an elaborate set up spinning three 300 h.p. Sprague electric dynamometers. A total of four were built for testing, however at the time there was not an airplane large enough to accommodate this engine
Engine: Duesenberg Model H
Type: V-16, Three Valves Per Cylinder Aircraft Engine
Bore: 6 Inches
Stroke: 7-1/2 Inches
Displacement: 3,393 Cubic Inches
Rated Horsepower: 800+ at 1,800 RPM
Carburetors: Four carburetors were specified for this engine

There is nice brand new issue regarding Duesenberg Aircraft Engines: 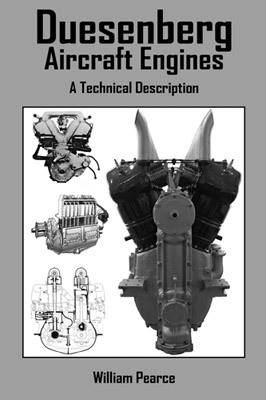 The Duesenberg name became legendary in early auto racing and is now known around the world as one of the most sought after classic cars. For a brief period, encompassing World War I, Fred and Augie Duesenberg turned their attention to aircraft engines. In the span of five years, their company created four unique aircraft engines and was involved in the development of others.

Duesenberg Aircraft Engines: A Technical Description contains over 100 illustrations and describes the aircraft engines from this nearly forgotten chapter in Duesenberg and aviation history.