The book "De Havilland Aircraft Since 1909" by A J Jackson says about the DH.123 as follows:

D.H.123 PROPELLER TURBINE DAKOTA REPLACEMENT
A series of design studies were made under this designation early in 1959 for a Heron/Dakota replacement seating up to 36 passangers. One study which reached the active project stage envisaged the installation of two de Havilland Gnome P.1000 propeller-turbines and although brochures were available at the Farnborough S.B.A.C. Show in September 1959 it was decided not to manufacture until the results of a market survey were known. In January 1961 an announcement stated that the project had been dropped in favour of the D.H.126.
Click to expand...

I've made it to google information on the project (which is available in an indetical form in a few websites):

What is interesting the Flight magazine mentioned the DH.123 only a couple of times; even after the 1959 Farnborough show the magazine published no detailed information on the design.

Does anybody here know more about it? (to see the DH.123's drawings would be really fascinating).

D.H. 123 Although de Havilland Aircraft have so far refrained from describing this project they do acknowledge its existence. Last April this journal suggested that it may be a DC-3 replacement, with characteristics differing markedly from the F.27, Herald and Avro 748 formula; powered by a pair of de Havilland P.1000 turboprop Gnomes, each rated at 1,000 s.h.p., it is likely to be a high-wing aeroplane, seating 40 passengers and matched to short-haul operations.

de Havilland D.H.123 Though no information is being generally released about this high-wing twin-Gnome turboprop DC-3 replacement project, it is described as a "very active project" to which airline reactions are being invited.

D.H.123 No official details of this "DC-3 replacement" project have been released. One design study is based on two de Havilland Gnome turboprops of 1,250 s.h.p. mounted on a high wing. Seating is reportedly for up to 36 passengers.

D.H.123 No details of this project have been released. The broad concept is a small transport aeroplane with seating for about 30 people, with aircraft-mile (and hence seat-mile) costs of the same order as those achieved by old DC-3s. The project has been studied by a number of airlines who want to replace their DC-3s, but who consider that the alternative twin-Dart aircraft are too big and hence too expensive to operate for the light traffic flows that exist in so many undeveloped areas of the world.
The D.H.123 would, in fact, be more of a true DC-3 replacement than the rather larger and more powerful turboprop designs that are on offer. Powerplant would be two de Havilland Gnome P.1250 turboprops of 1,250 shp. each. One design study is based on a high-wing arrangement.
S


But the most interesting account of the DH.123 is found on a website devoted to the BAe 146 and its ancestry:

Since the late 1950s, de Havilland at Hatfield had been looking at creating an aircraft that would replace the continued use of Douglas DC3s (Dakotas) which were still being used as "feederliners" for short haul flights. The first study was the DH 123, a twin Gnome-engined turboprop along similar lines as the Airspeed Ambassador, Airspeed being in fact owned by de Havilland. However, de Havilland became part of the Hawker Siddeley group in 1960 and the idea was dropped for two reasons, firstly because the aircraft conflicted to some extent with other HS products, including the HS (Avro) 748 and secondly because it was believed at Hatfield, that a turboprop was only and interim solution and that a turbojet or turbofan aircraft would be the preferred way to go.

Would have had an 11ft 3 blade propeller, I wonder what the nacelle for this engine would have looked like?

As I've said it is really fascinating. By the way, where does the drawing come from?


According to this, the DH.123 was first concieved in 1958, as the long and oft-sought 'DC.3 replacement'.
It was developed at the company's Airspeed Division in Christchurch (which explains the Ambassador-like look),
by W A Tamblin, who had designed the DH Heron.
Span was to be 81'3", length 60'6", height 20'3", and wing area 550 sq ft.
Capacity was to be 32-40 passengers 4-abreast in a cabin 7'11" wide. Gross weight was to be 22,100 lbs.
Powerplant was to be 2 DH Gnome turboprops of 1,150shp each.
At the same time, studies at Hatfield were examining the advantages of turbofan power for an aircraft of
this size, and, following the absorption of de Havilland into the Hawker Siddeley Group in January 1960,
the DH.123 became a competitor to the group's Avro 748.
As a result of this, the DH.123 was shelved, and DH turned to a new project, the DH.126 jet feederliner. 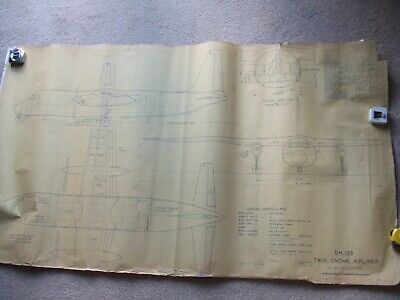 I have other original old aircraft drawings listed and also waiting to be listed.
www.ebay.co.uk
F

Remarkable resemblance to the F-27. Conceived in 1958 acc. to Air Enthousiast, the F-27 had by that time already been flying for 2 years and first production aircraft were being delivered to Air Lingus in '58. Why would DeHavilland want to start such a project like this?? Any theories in this?

I'm hoping that a SPF member will have the winning bid on those drawings. But just in case ...


FXXII said:
Remarkable resemblance to the F-27. Conceived in 1958 acc. to Air Enthousiast, the F-27 had by that time already been flying for 2 years and first production aircraft were being delivered to Air Lingus in '58. Why would DeHavilland want to start such a project like this?? Any theories in this?
Click to expand...

I suspect that it was because DH thought they had access to a better engine. AFAIK, Dart and Gnome sfc is about the same ... but the latter weighs less than a third of the former.

it is real one,the DH-123 was re-allocated to this concept.

Aha, a third lighter, that is substantial. The Dart had however already proven itself in transport operation. Also the dart reached some 2000 hp, and I read somewhere that the Gnome was around 1150 hp. The DH 123 was 22.000 lbs and the F-27 40.000 mtow, so the DH 123 was a smaller aircraft, more of a class in its own, not really comparable to the F27.
Very interesting find, I had never heard of it before.

A few issues ago, Air-Britain's Aviation World had an article on this aircraft, IIRC about two years ago. These magazines are quarterly issued. The aircraft is more like a Dash-8 than a F-27

Apophenia said:
I'm hoping that a SPF member will have the winning bid on those drawings. But just in case ...
Click to expand...