I don't post over here much, but I'm a little surprised that no one's mentioned the Bell XP-52. It was designed in response to the same R-40C RFP that was mentioned here earlier. It was a twin-boom configuration aircraft, with an inline engine driving a pusher prop and nose-mounted cannon armament. I've seen images various places online, but can't seem to lay hands on any of them at the moment.

found this beautiful painting on my HDD

Your posts are welcome

XP-52 is an intriguing design. You're right that references can be found where it's described as an R-40C submission. But many others point in the other direction. In the list I published on post#2 from the present topic, which in my opinion comes from an authoritative source, the Model 16/XP-52 doesn't appear. According to it, Bell tendered its Model 13 to R-40C. Model 13 looked more like an enlarged P-39. In Bell Aircraft (Ed Putnam) I think there is a mistake on the description because the aircraft is associated to 1941 as "date of design". 1941 is too late for R-40C, however I think the real figure should be 1939 cited on Wings (August,1996 issue). BTW, there is an interesting windtunnel model with a different tail layout. I strongly recommend that magazine, which is still available, to all US pre-1945 fighter enthusiasts.

My personal opinion is Model 16 was designed a few months after Model 13, after Hap Arnold pushed for advanced lineal engine fighter (what latter was formaly requested as R-40C). While Model 13 was Bell's entry to R-40C, Model 16 could have been a parallel and more radical study based on Douglas DS-312A. May be Model 13 was to be R-40C "Phase One" entry and Model 16 would have been their entry for R-40C "Phase Two". As you probably know "Phase One" admitted designs based on existing technology while "Phase Two" demanded performance to the limits on totally new designs. The powerplant selected for Model 16 was the 1350 hp Continental IV-1430 which development was plagued with cooling problems that ended with its cancellation. Bell re-engined and thus re-designed its Model 16 into what the USAAC assigned the XP-59 designation. I don't know its Bell design number. XP-59 engine was the powerful and already in production Pratt&Whitney R-2800 Double Wasp radial (the same engine that powered F6F, Corsair or P-47 fighters). However, the USAAC cancelled the XP-59 in 1941 probably because it was found that it was not to be a revolutionary performer. By that time, late 1941, the USAAC selected Bell to concentrate all efforts into the production of US first operational jet fighter. Work on XP-59 was to judged a distraction of resources and thus terminated. However USAAC assigned the XP-59A designation to the jet to cover that program with the unrelated XP-59 work.

Wings (August,1996 issue). BTW, there is an interesting windtunnel model with a different tail layout. I strongly recommend that magazine, which is still available,
Click to expand...

Could you tell me where, please? I haven't thought of a search strategy that doesn't produce things like "drawings" in great quantity!

and "paper" mags are no more available. It seems that they are scanning their back issues into CD/DVD support for sale. They have started from 2006 and counting down. The older "year" available is 1999 so you still have to wait to 1996.

I don't like very much that formula. I love the pdf but I rather prefer to buy single issues.

Uh, there is an AAHS members who is putting up for sale the entire collection on Wings/Airpower for 140 dollars.. anyone interested ?

Thanks for the link Pometablava. I suppose you beat me to the paper collection offer!?!...
If you get it, let me know what duplicates you might then have that might interest me - the Aug 1996 especially.
I agree that the whole lot on disc is a bit pricey for what I might want, especially when the one I want isn't there yet!

pometablava said:
found this beautiful painting on my HDD
Click to expand...

I did that image about four (?) years ago. It was my first attempt at rendering a 'secret project'. Attached is my second.

Thanks for the link Pometablava. I suppose you beat me to the paper collection offer!?!...
Click to expand...

Well, actually not. First I have to wait for Skybolt's PM. 140$ for the full collection is quite a reasonable price for me but I'm almost sure that P&P will be astronomical if that collection would be shipped to Spain from the USA. So...I'm not very confident on seeing it on my home. :'(. Wings&Airpower was a first class publication with precisse and well researched contents and the rarest historical pics. I'll keep you updated anyway.

I didn't knew you were the author of that XP-52 drawing, it's a pleasure to be in the forum with artists like you. Thanks again for that great XP-59 render. 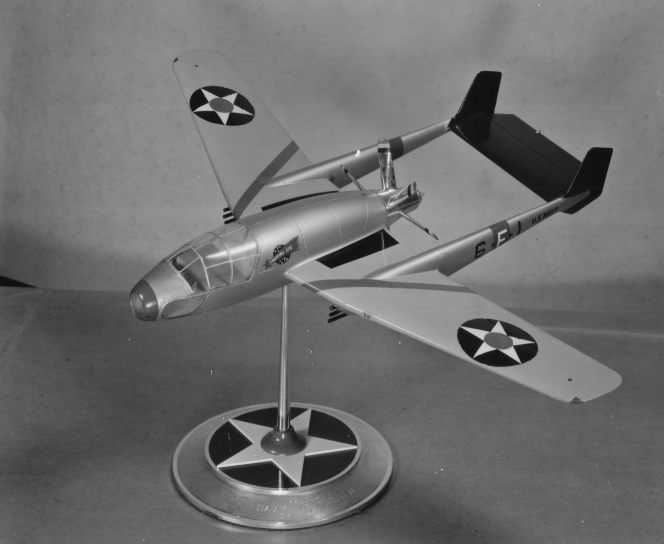 Photos of the full scale mockup at the Cultish Blog of Imperialist Fascist Kool-Aid Doom.
L

Photos of the full scale mockup at the Cultish Blog of Imperialist Fascist Kool-Aid Doom.
Click to expand...

Great pics, thanks a lot Scott!

Was wondering what the first designation would have looked like.
S

The Model 20 was also very similar to the Model 19, proposed to the US Navy (below). Both derived from the Model 16 project, or XP-52 (further below).

Stargazer: xp-59.jpg was, of course, based on the photo of the windtunnel model and a 3-view. Alas, I mistook the access panels beneath the cockpit for additional glazing -- which might have been handy on the navalized Model 19 ;D

XP-52 paint.jpg was based on a 3-view from the same source (Angelucci's "The American Fighter", IIRC).
J

Excellent! Thanks for sharing. What's the source for these? Never saw them before!

It seems to be simply a P-39 fuselage and (perhaps) wings coupled with two jet engines "a la Meteor" more than the Su-9/11 that obviously shows the influence of German me-262.
J

Stargazer2006 said:
Excellent! Thanks for sharing. What's the source for these? Never saw them before!
Click to expand...

from the book; American Fighters since 1917 to the Present.

Not quite. As the first picture's reference number suggests, this is the Navy's Model 22, a competitor of the Grumman F7F.

Not quite. As the first picture's reference number suggests, this is the Navy's Model 22, a competitor of the Grumman F7F.
Click to expand...

blackkite said:
Perhaps radiator cooling air inlet is located at the nose of the aircraft. ;D
Click to expand...

Precisely. The radiators for the Bell pusher fighters were located in a duct in the nose of the aircraft.

I've always thought that this might ahve been part of the reason why the pusher P-59's designation was re-used for the Bell jet. Leaks about a new jet fighter might be dismissed on the grounds that the source of the leak misinterpreted the radiator duct as a nose intake.

Thanks a lot for your sharp opinion.
When I see P-59 without propeller, I misunderstand that it's a jet fighter.

maybe this twin boom patent airplane of 1935,inspired the XP-52 design,it was from
Mr. Oscar A. Swanson,Roscoe C. Wilson and Benjamin S. Kelsey.

The location should ring a bell. In fact we've discussed these engineers elsewhere (when we talked about the misidentified "Martin XB-16" project, because Swanson and Wilson were also involved in it). "Dayton, Ohio" indicates that these were Army Air Corps engineers drafting concepts for companies to use as starting points. So perhaps this could have inspired Bell, though I think the configuration for that airplane (a twin-boom cabin pusher) was something that was pretty much "in the air" at the time with many civilian "safety planes" such as the Stearman-Hammond Y-1S for instance.
L

And Bejamin S. Kelsey was apointed officer-in-charge
of the Fighter projects Office at Wright Field...

He had , as Warren M.Bodie wrotes, a " Wellsian foresight " about
new fighter concepts.

Thank you for the explanations my dears Skyblazer and Lark.

Hi! Navy's Model 22, a competitor of the Grumman F7F.
http://www.theaerodrome.com/forum/showthread.php?t=70072