From "The Aeroplane" August 1951 and unknown source

Excellent postings.
The only other Baynes Heliplane image I know of depicts the Bird Models resin kit (see attached and (http://www.blackbirdmodels.co.uk/baynes-heliplane-72-232-p.asp).

Looking at the Baynes Heliplane, it's hard to avoid the feeling, that no real advances
were made in tilt rotor design ...

Platt-LePage Aircraft had design studies for two Tilt-Rotor designs going back as early as 1940. 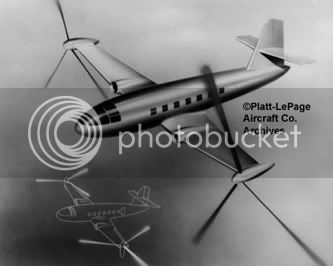 Did the design for the PL-16 really beginn that early? I have always read that this projects was from 1945/6.
Very intersting aircraft would love to know more about it!
Are there any other early tiltrotor / tiltprop designs apart from the well known Baynes Heliplane, the Fa 269 and the Weserflug P 1003/1?

luedo34 said:
Are there any other early tiltrotor / tiltprop designs apart from the well known Baynes Heliplane, the Fa 269 and the Weserflug P 1003/1?
Click to expand...

Here is some more info about this project in Russian:
http://vtol.boom.ru/rus/Sokol/index.html

Thanks a lot Readstar72, very interesting!
Im am very interested in this kind of aircraft. Did the USSR have any post war tilt-rotor projects ? I only know of the Mi-30 and the M-12.

luedo34 said:
Thanks a lot Readstar72, very interesting!
Im am very interested in this kind of aircraft. Did the USSR have any post war tilt-rotor projects ? I only know of the Mi-30 and the M-12.
Click to expand...

Yes, we had – and not only postwar. The first was wartime, while it was only a student’s project. In 1944, 20-years-old Shota Hutsishvili, a Georgian native and a student of Tbilisi aviation college, designed it as his graduation work. He proposed a single-seat VTOL tilt-wing fighter with two radial engines and props/rotors of 5 m diameter. He called it “Gelikopter-samolet”, or “helicopter-airplane”. The project didn’t develop further, but its author became a MAI student without any exams.

In 1947, Hutsishvili proposed another “helicopter-airplane” project. It was tiltrotor with engine nacelles mounted on wingtips; the props became larger (9 m diameter) and looked more alike helicopter rotors. Its supposed takeoff weight was 2200 kg, and maximum speed about 360 km/h with 2500-hp powerplant. This project was considered by the Expert Council of MAP SSSR (USSR Ministry of aircraft production), but was rejected because of underdeveloped rotors and flight control systems.
http://vtol.boom.ru/rus/Shota/index.html

The next was Ivan Bratukhin, known as a helicopter designer. In 1955-56, working at CAGI, he proposed a tilt-wing VTOL transport aircraft with two mighty NK-12MV turboprops. He calculated it could transport 5 ton load to 1250 km with 700 km/h cruise speed. The takeoff weight was about 30 tons.

A similar project was designed by SKB MAI in 1963, but it had four turboprops:

Also, Beriev OKB worked in 1960s on the design of VTOL transport aircraft. It was Be-32 program (not to confuse with modern little turboprop airliner!) There were many different projects of Be-32 designed, just like its Myasischev competitor M-12. Most of them were jets with additional lift engines. But it was also a quad-tiltrotor version, similar to Curtiss X-19, but much larger:

And also, one very interesting VTOL project was designed by Alexey Scherbakov, known for his Sche-2 (rus. Ще-2) transport airplane. The project was designated VSI - Vysokoskorostnoy Istrebitel (High-Speed Fighter), but it also would be VTOL capable. It wasn't tiltrotor - it was "tilt-jet" like VJ-101C or XF-109, but much earlier! This project was proposed in 1947!

This is tunnel model of the VSI on this photo. The real aircraft might have two RR Nene / Klimov RD-45 turbojets, and expected maximum speed was 1500 km/h! (I think it was too optimistic). The project got an approval from Professors B.N. Yuriev and V.S. Pyshnov of VVIA (Voenno-Vozdushnaya Inzhenernaya Akademiya - Air Force Engineering Academy), and also from VVS command. There were even built a special testbed and a stripped version or VSI (with Jumo engines) for tests. But later, the program was accepted too risky, and the tests were stopped.

Re: Baynes Heliplane and others early tiltrotor / tiltprop designs


luedo34 said:
Are there any other early tiltrotor / tiltprop designs apart from the well known Baynes Heliplane, the Fa 269 and the Weserflug P 1003/1?
Click to expand...

Russian emigre Nikolai Zhuchenko worked in Yugoslavia, in 1937 officially received the order from the Yugoslav Air Force to build konvertoplan "Aerostatoplne". Military supposed to equip these machines as an experimental aircraft carrier transport "Zmaj" (later, after the occupation of the German Navy has received the name "Drache" / beginning of November 1942 served in combat conditions, the world's first ship - helicopter carrier with Fl-282 "Kolibri" on board )
Zhuchenko presented several options for military use "Aerostatoplne", and the objective was not a bad idea.
The tests took place in summer 1939, the machine tied to the pull of the earth ... The first prototype had a weak engine Walter Mikron 50 h / p; span-6, 7m; lenght-7, 3m. The war began divert more funds to other priorities. The project was abandoned ...

Thanks redstar 72, thanks borowik, very interesting stuff indeed.
Are there any technical data for the Yugoslawian aircraft?
S

An item on the Platt-LePage PL-16 scanned from a mid-1940s Science & Vie and reworked for clearer reading.

luedo34 said:
Thanks redstar 72, thanks borowik, very interesting stuff indeed.
Are there any technical data for the Yugoslawian aircraft?
Click to expand...