We have had a discussion on it here

and some are starting to suspect BAE are watching the board for ideas.....

Some photos of BAE's model of the proposed UXV (not UXB as was stated in the Flight International Article) at the recent DSEi exhibition (sorry about the poor quality, the photos were taken with my phone):

The phone-quality photos produce an interesting effect. They look rather like CAD designs.

An interesting letter....how does it stuff work...

MOTHERSHIP FOR UNMANNED VEHICLES LOOKS TO THE FUTURE

Using a proven naval hull form to launch, operate and recover large numbers of small unmanned vehicles for extended periods, the UXV plays the role of mother ship - a permanent base and control centre for the futuristic unmanned land, sea and air vehicles before, during and on completion of their missions. The 8000-tonne vessel, an evolution of the multi-role warship, is not expected to enter service until post 2020.

The design provides a cost-effective solution to the evolving challenges facing the modern navy. Features will include:

The weapons are a future development of the Type 45 combat suite. With the UXV support capability, performing multiple roles combined with an easily adaptable design, which moves the concept of stealth to the next level.

The concept brings together naval technologies developed through collaboration with partners such as Rolls Royce and across BAE Systems business units, as part of a programme of continuous improvement.
Click to expand...

NEW-ERA CANNONS
Next-generation cannons could fire bursts of 20 rounds in succession—and have the munitions all arrive on target at the same instant.

SMART WEAPONS
The foredeck could house superlight vertical-launch missiles, ultra-precise Phalanx missiles (which can shoot down incoming rockets traveling as fast as Mach 3) and cruise missiles.

MOON POOL
From a hidden pool in the ships interior, unmanned subs could deploy and return to the craft safely and invisibly.

HIGH-TECH DECKS
On deck, electromagnetic catapults could launch unmanned aircraft from adjustable ramps. Radar, sensors and RFID chips could be used to organize the drones.
Click to expand...

Got to hand it to BAE, interesting concept. Almost like a future version of an LCS mixed with the Absalon and expanded flight deck.

Any idea about dimensions?

JohnR said:
Any idea about dimensions?
Click to expand...

Norman Polmar writes on Military.com that the UxV combatant’s hull and combat systems will be a development of the Type 45 destroyer aka Daring Class and be an enlarged design.
http://www.military.com/forums/0,15240,150165,00.html

I presume the UxV combatant's hull has similar dimensions since it is derived from the Type 45.

IMHO, if ever this design manages to make it off the design board and into the shipyard, it will probably be as a nuclear powered design.

Grey Havoc said:
IMHO, if ever this design manages to make it off the design board and into the shipyard, it will probably be as a nuclear powered design.
Click to expand...

Grey Havoc said:
IMHO, if ever this design manages to make it off the design board and into the shipyard, it will probably be as a nuclear powered design.
Click to expand...

Yes. Despite that little problem. ;D

The United Kingdom has never built a nuclear-powered surface ship.

A little thought exercise here. If they did go the nuclear route, would I be amiss in thinking that they would use two of RR's PWR2 Core H type reactors (at a glance they would seem to have the necessary growth margin) for the design, or would they use something a little more exotic? 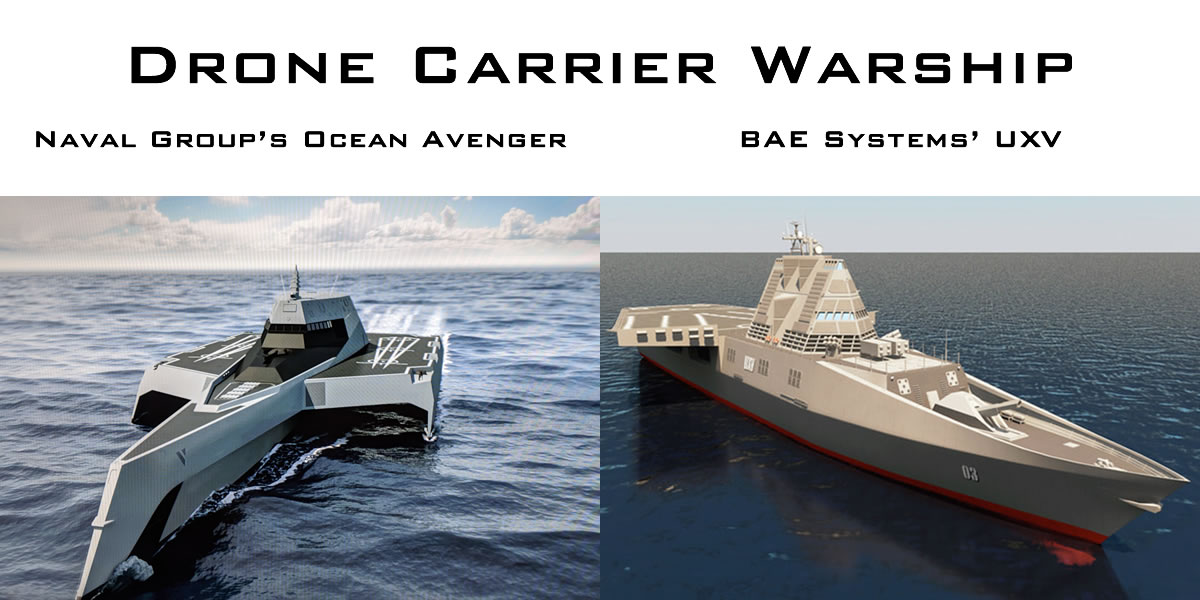 Op-Ed: Is it Time for the U.S. Navy to Build the Drone Carrier Warship? - Naval News

As the Pentagon and Congress grapple on determining what to build to meet the “500-ship U.S. Navy goal,” a couple of years-old ideas and artist renderings may lead to a more flexible future for the U.S. Navy’s global operations. BAE Systems' UXV and Naval Group’s “Ocean Avenger” are Potential...

Mentions both the UXV as well as Naval Group's Ocean Avenger concept that was revealed last year.
Click to expand...