What if.....
What if the Supermarine Swift had been a better fighter?
Assuming perhaps that whether by accident or design Supermarine gets thing more right earlier on and the Swift proves to be a better fighter aircraft.....perhaps better then the Hunter.
What happens next?
Well 150 were ordered before the aircraft had been fully tested.

Later marks were in OTL cancelled, but if performance was better than the Hunter would this still occur or would we see the Hunter dropped?
As it was preference for the Crescent Wing Swift development saw funding two prototypes. Could this have gone further?

How could the Swift have been made better? A stabilator might have helped. In 1944, RAE Bedford converted a Spitfire to test the 'flying tail' concept for the Miles M.52. So, it is a puzzle as to why Supermarine didn't put an all-moving tail on the Swift from the outset. The RAF not insisting upon doubling fixed armament to a Hunter-style four-gun arrangement would've helped with balance and weight issues.

Had the Swift not been a dog, I suspect that orders would still be issued for both it and the Hunter (in order to support industry). The loser in this scenario, of course, is Hawker Siddeley who would be selling fewer Hunters.

I'm not sure that the crescent-winged Supermarine 545 was the answer to anything. The Type 545's nose intake seems a bit of a retrograde step ... although introduction of the then-new Whitcomb area-ruled fuselage was definitely a step forward. Perhaps tweaking a 4-year-old design already viewed as a failure was not one of Supermarine's smarter moves?

Yeah there is so much what-if here of things working out.
I honestly think Supermarine was not up to the task. All its jet fighters (land and naval) from the Jet Spiteful onwards were baby steps, look how many intermediate prototypes and gradual changes were made until the Scimitar and Swift emerged.

The 545 intake does seem odd but once you recognise it would have had a proper radar radome above it, then its pretty much in line with what many other designers were doing (North American, Dassault, Lavochkin). Would the crescent wing have helped? Maybe, having a decent tail area and flying tail would have been a good bonus too.

Let's not forget that the Swift in certain regimes did fly well and the Hunter had its own fair share of issues. The MoS didn't exactly help matters either.
A

RAF had been blessed in securing dual funding, insurance, for core kit: Hurricane+Spitfire, Halifax+Lancaster, Vulcan+Victor. Not really flattering to industry, as the assumption was one would fail. Through 1953, duplication, V-S+HAL to rerun 1940, was affordable due to the munificence of US, willing to shovel $ at UK/France/Italy to duplicate what US was already building (see Noratlas: C-119). US' logic was that it was probably quicker to have (us) build what-we-knew, than to licence US types - distracting the US licensor-designer. US' intent was to put more manned, operational kit up NOW! and their own industry was full for own use and for Allies with no home industry.

So US accepted that UK would make Hunter and Swift work - why would they not, and funded both...plus Mystere IV, plus FIAT-F-86, plus.. In 7/52 it was Swift that was seen as the probable better Standard NATO Type: US funded 346xRAF/RBAF/RNethAF, some to be built at Shorts, risk seen as low, as it derived from Interims, inc. VS.392 Attacker (c.60xMDAP - ahead of any help Sea Hawk might be to Hunter).

Matching new powerplant (AJ.65): new airframe: gun overtaxed both Supermarine and Hawker. Either or both could have failed. These were neo-Systems which UK procurement process did not understand. Remember that in our process the airframe designer had no involvement in...well anything outside his own plant. So, for example, priority at RR to clear Avon-in-multiple-applications was not for V-S or HAL to determine. They waited patiently, if MoS wanted effort firstly on Avon-in-Valiant. And ditto for gun, gunsight...everything. It was neither wholly Joe Smith's fault that Swift fell out of the sky if trying to fly, nor was it Sir Sydney Camm's fault that Hunter did so while trying to fight, and it was not wholly due-to-Camm that Hunter was fixed first. Sabrina helped.

More early Marks Swift and Hunter were ordered than crew entered training, concrete was poured for bases: MoS knew one would fail. If neither had, then at some point in the 1954-ish timeframe, one of HAL+V-S enhanced/transonic/AAM/reheat schemes would have been selected. Insurance would not by then have been accepted as a proper use of our money, as risk had been reduced. In principle either team could have been selected. MoS would have tried to work out which was best applied to a Super-for-1957 (?HAL P.1083), the other to a Super-System-for-1960 (?V-S Scimitar MRCA).
Last edited: Sep 19, 2020 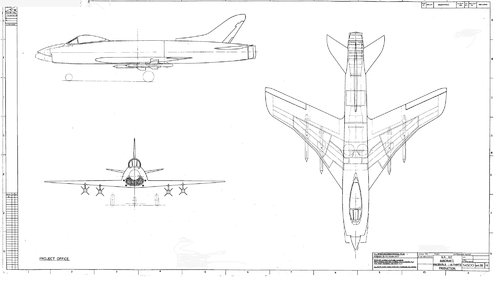 In other words, had Supermarine got it right (insert accidentally or by miraculous foresight), then 364 ordered under MDAP and supplied RAF, RBAF, RNethAF.
Almost certainly later marks with reheat would drive hot end knowledge.
Potential to steal Swedish Hunter order here.

Hooked Swift was OTL ordered then dropped, but in AH likely rolls onward to limited trials for FAA. Reheat on carriers almost certainly trialled well ahead of OTL. Could result in full folding naval version, and equippe RNethN and RAN as well as RN.
This can deliver day fighter and possibly AAM equipped version ahead of OTL arrival of Sea Vixen.
Consequently Scimitar numbers cut further to limited interim anti-Sverdlov force. Or even cut completely if task can be piled on Sea Vixen until Buccaneer arrival.
Supersonic version, CWS Type 545 could roll on with feedback on what works. If prototypes flies, strap on rocket could take F.177.....especially if already fitted with AI set and AAMs. Too far gone by '57. Cheaper than wonderweapons of post '57. Bird in the hand.


If it could steal some from Lockheed......
Flow of cash into Supermarine could result in being too busy for GOR.339 or more of a back seat to EE.
A

I LOVE the Type 545. Is there a 1/72 scale model of that beauty, somewhere ? Shame it never flew. Such curvaceous bumps ! Made the SMB-2 and F-100 look like flying turds, really.

The Type 545 was designed in response to Specification F/105D2, which called for a supersonic fighter to replace the Swift. Two designs were suggested, the Supermarine Type 545 and the Hawker P.1083 (this was soon cancelled). Supermarine were awarded a contract to produce two prototypes in...
ww2aircraft.net
Last edited: Sep 19, 2020

Hooked Swift is a mystery. It was ordered and spec written around it (and a possible hooked Hunter), but were any low-speed trials and mock carrier approaches and landings ever flown by either type as an assessment?

The Swift was the first major aviation public procurement fiasco and it stung the MoS and planted the seeds of all the subsequent close scrutiny of wasted taxpayers money. The problem was the rapid re-armament panic of just taking anything that could possibly fly off the drawing board and turning over new factories for Swifts and Hunters that were never needed. Less haste and more reasoned procurement would have been wiser, saved money and hassle.

Should the transonic Swift and Hunter have been axed? Possibly, with the threat of Soviet nuclear bombers taking priority the F.1B programme was always going to be the more important (and the monstrous F.155T). Having something able to mix it with MiG-19s and Su-7s for RAFG would have been good. A 545 with Firestreak would only really have been of use as a back-up interceptor (four-shots making it a good goalie for anything that got past Blue Envoy, Bloodhound and Lightning) but not so useful against fighters but four Aden would have been potent against any jet fighter in normal dogfighting conditions until way into the 1960s. Lugging bombs and rockets would have been good to turn it into a real tactical swing-role fighter for 2TAF. Certainly a rival to the F-100 for NATO nations.

So one of the early swept wing prototypes of the Swift did do carrier trials, but what the results of those were is not something I have.

Less haste might have resulted in entirely different designs making it to service. Though it could have seen both Swift and Hunter work through their issues prior to production.

alertken said:
Through 1953, duplication, V-S+HAL to rerun 1940, was affordable due to the munificence of US, willing to shovel $ at UK/France/Italy to duplicate what US was already building (see Noratlas: C-119). US' logic was that it was probably quicker to have (us) build what-we-knew, than to licence US types - distracting the US licensor-designer. US' intent was to put more manned, operational kit up NOW! and their own industry was full for own use and for Allies with no home industry.
Click to expand...

Just to be clear, this wasn't altruism on the part of the US. A vast amount of capital (human, intellectual and financial) had flowed west across the Atlantic 1936-46. When that much wealth flows one way it has to flow back otherwise the system collapses. So, handy for Europe yes, but also intelligent self interest on the part of the Americans.

If it had proven more successful maybe a trainer version would have been required. Type 557

What happens to Hawkers if Hunter is just say 60 aircraft considered a failure?
Does Camm move onto P1103 type studies earlier?
Or does HSA shift fighter studies elsewhere in the group?
Perhaps AWA?

Schneiderman said:
If it had proven more successful maybe a trainer version would have been required. Type 557
View attachment 641511
Click to expand...