DH116 was proposed in Jan '52, and the RN actually ordered two prototypes, but by Nov DH had to back off this because of a lack of design/drawing staff and re-offered the DH110.

Super Venom utilised a straight through jetpipe with reheat, no booms and was potentially operable from CV and CVL.
Twin ADEN, and either AI.17 or APS.21 radar. RA.14 Avon.

Climb in reheat 29,600ft/min and a level Mach 0.975 at sea level. Clearly supersonic at altitude.

So what if DH finds the staff to complete this and it flies.....?

Well we know the AI.23 is comming as a upgrade to the radar.
We know that improved marks of Avon will deliver more thrust both dry and in reheat.
Since the design seems more flexible a scaled up version with Olympus or Conway is quite achievable.

We know that the cockpit in based on the Venom/Vampire so a trainer or two seater FAW is fairly simple to achieve.

Chief critic is the inlets and the high 'T' tail. But all that is something that can be improved with later marks.
Granted it's unlikely to make a 2 hour CAP, though a developed version with more fuel is possible....

This could provide a alternative to the Swift and Hunter's later production for the RAF as well......as a single seater.

Funds could be found instead of the crescent winged Swift Type 545.....Though timing is very close.
Z

Why would this succeed?

It can be assumed at least 142 would be ordered as per Sea Vixen. Possibly more to offset it's lower endurance.

If progressed with this raises questions of why fund the Hunter mk6 and beyond, which was flown in prototype form in Jan '54. 384 of which were built.....

If progressed with the dire state of Swift development is likely to be cut earlier than '55 and could be as early as '54.
a total of 102 mk5's were built.

Depending on how rapid progress is made the Scimitar could be called into question as a fighter/interceptor much earlier and either this imposes a need to speed NA.39 to service or the earlier reconfiguration of the Scimitar to a strike platform.

Considering how protracted the Javelin development was, it's certain that the FAW mk6 is in question 33 of which were built, but earlier marks might still progress depending on the speed progress with the Super Venom.
mk7 was 142 built
mk8 was 47 built
119 mk7's were rebuilt to mk9 standard

So there is potential scope for a total production run of over 700 machines here, in various marks for various roles.
FAW.
F
G
R
and various mixed designations.
Such a scale of production would make it a potentially an attractive purchase for other states.
It would also massively strengthen DH's position in future fighter developments.
K

Would this be the Super Venom: 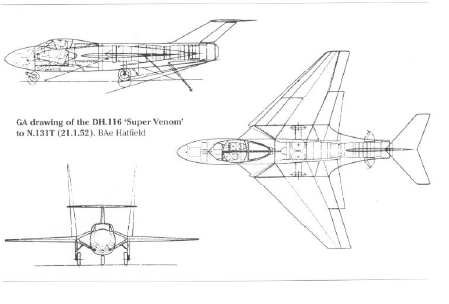 This one, exactly. Looks it could have a big production run.

I would kill to read a TL when Great Britain aeropsace industry embrace some kind of "French model" in 1946, rationalizing the number of aircraft makers.
Then there would be a British Ouragan (arguably, the Meteor) followed by a Mystere IV (more Hunters, no Swift), a SMB-2 (Hawker 1083 ?) a Vautour (DH-110 and nothing else, for both RN and RAF), before a British Mirage III (FD-3 ?) and eventually, a Mirage IV.

The DH.116 could have been very useful for the FAA, I think a Super Venom/ Scimitar pairing would have been pretty potent (the latter for strike).

I'm a bit sceptical about accepting brochure figures uncritically. The DH.116 was a cut-price offering too, using bits of Venom to save development time and sacrificing armament and endurance for size. It was decently equipped though and its interesting to speculate if the FAA would have switched to an AAM armed version using Fireflash.

I think the RAF would have been pretty wedded to Swift and Hunter, and as for future developments the P.1083 would have outstripped the Super Venom. Of course a single-seat DH.116 was possible but there's no brochure so we can only guess at its performance and de-navalising would have taken time and money. You rightly point out radar gives an edge, but the AI.21 was not pilot-operarable and the AI.23 is still in the future and there is already the P.1B looming up in the wings. As an AW type the RAF wanted endurance and that's something not so easy for the Super Venom even if you load it with tanks and a refuelling probe.