One more from the National Soaring Museum to share - the Allied XLRA-1. The basic design came from the Bureau of Aeronautics and was then built, with local modifications, by Allied and Bristol.

The nearly identical design by Bristol called the XLRQ-1 interestingly had a retractable tricycle gear and an outboard motor for limited sea travel (always wondered about that for the waterborne gliders - what do you do if you don't make it to the beach...)

Anyone have this issue which I could get a copy/scan of the XLRQ-1 article:

Fascinating project but I don't understand what its tactical use would be.

Once the glider lands how do the troops get to the shore?

Was it for use in the calm lagoons of atols?

Which is likely why it did not pan out. The Germans also played with the idea and it went nowhere.

Tough enough as it was to reach a well defended beach in a landing craft, I can imagine how vulnerable it would be in a glider.

The LRA was a 12 seat flying boat transport glider intended to be used by the US Marine Corps for ‘island hopping’ in the Pacific. Two aircraft were built as XLRA-1 and the serials were 11647/11648. The first flight took place in 1943.
Production of 100 production aircraft as LRA-1 and with serials 31403/31502 was cancelled as the proposed use proved not practical.

A design for a 12 seat amphibious glider, four XLRQ-1s were ordered of which only the first two were completed with serials 11651/11652. The aircraft were intended to be used by the US Marine Corps for the ‘island hopping’ in the Pacific. However, the proposed use proved impractical, leading towards cancellation of the programme. The cancelled aircraft were serialled 11653/11654. The first flight was in January 1943. Although ultimate production was estimated at 12,000 only 100 production LRQ-1s were ordered with serials 33715/33814 but these were eventually cancelled.
T

Have you seen how much this model is unusual? This is one of the very very few hull marine aircraft (not upon floats) with a low wing, so a wing which is waterproof and involved in stability on the water.
P

After reading and seeing how many of these assault gliders came to their demise, with so many deaths and injury's of the troops they carried into battle - I wonder if this water borne landing method would have had some merit?

Although saying this, I envisage that the assault troops would have to leg it more often than not to their assigned objective.

A number of german Go 242 were modified for water landings with the intention to
transport frogmen for attacking the british fleet at Scapa Flow. Maybe those US
assault gliders were intended for an attack against the japanese fleet ?
R

ı would venture night time approaches by paramarines , a name understand that doesn't command much confidence but before helicopters were available it should have been a valid theory .They arrive as a compact unit ready to infiltrate in force . Japanese recon planes are under maintance at night , they have seen no ships in the day but on the day when all those landing ships appear on the horizon , the airfield has already been captured by the the Marine Battalion that had to paddle one or two hours ( that is because a water landing would not be so stealthy ) .

It's worth to add that designation LR was of those transport gliders ordered by US Navy Aviation.
Allied XLRA-1 was built with a fixed gear, Allied XLRA-2 with a gear rejected after start.
In this class there were also :
- Allied XLR2A-1 ; m' looking for more detailed informations,
- Autogiro Company of America Aviation XLRG-1 ; waterplane transport glider,
- Snead XLRH-1 ; m' looking for more detailed informations,
- Naval Aircraft Factory XLRN-1 ; heavy transport glider,
- Naval Aircraft Factory XLR2N-1 ; m' looking for more detailed informations,
- Bristol Aero XLRQ-1 ; mentioned by Mark retractable gear amphibian,
- Waco XLRW-1 ; common known,
- Waco XLR2W-1 ; common known.
And when Mark's deeply considering " but I don't understand what it's tactical use would be. "
there's a delusively simple answer why thousands of pigeons had to act
as the television torpedos indicators to destroy German U-boots
and why the millons of Mexican bats had to be thoughtless used as burning bombs
to destroy Tokio before Little Boy was constructed.
Ask Uncle Joe ...
J

The XLR2N-1 was the design for a 24 seat single hull amphibious glider based on the XLRG-1 or the XLRH-1. The requirements were called into question and further development was cancelled in 1943.

I know there seems to be some conflict (twin hull v single hull) but I have found no answer for that.
T

From a 3-view drawing that is somewhere in my archives, I have drawn in 1998 a slanting view of the XLRH-1 (for my free book that is downloadable at http://cmeunier.chez-alice.fr/Free_EoFG_MV.htm )

Thanx You very much, both Jos & Tophe.
For my own pleasure I collect photos and drafts of the American historic military airplanes
in every categories known to me, Army and Navy ; Building an album.
I have to boast of the draft of the Tophe's Snead XLRH-1 to my friends right now.
They love aviation history, but they don't speak English.
I don't speak English too, but my Brazilian friend, girl named Malu, says
that I effectively order guinness beer and tequila in London pubs. With Malu we love London.
If I happened yet to find any drafts of Wedell - Williams XP-34 project ...
T

Boogey said:
If I happened yet to find any drafts of Wedell - Williams XP-34 project ...
Click to expand...

I have a double-page including 3-view drawing of the WW XP-34 in the book "US Fighters", but maybe that would deserve another topic, no? I let you start it Boogey...
PS. Boogey, do you know that I live in the Bugey mountains, close to your name?

According to the site linked below, BuAer Bureau Numbers 31403 - 31502 were reserved for the production examples before the contract was cancelled.


EDIT: Just realised Jos Heyman beat me to it!
J

Bill Norton's 'American Military Gliders of World War II', a 2012 book, provides some interesting reading on the concepts behind the waterborne troop gliders in Chapters 6 and 9.
The book also provides an incredible amount of data on the CG and TG gliders.

Molt Taylor of Aerocar fame also designed the Coot homebuilt amphibian, which uses the same watertight low wing rather than sponsons or floats, based on his experience working on an amphibious assault glider for the U.S. Marines in WWII. I imagine, though I can't be sure, that this was that glider.

Mole said:
I imagine, though I can't be sure, that this was that glider.
Click to expand...

There were two amphibian gliders competing in that program: the Allied XLRA-1 and the Bristol XLRQ-1. It could be any of these.
J

According to the Norton book I referred to earlier (pages 200, 202 and 203) Molt Taylor was a Lieutenant in the US Navy who was involved in training gliders and the GLOMB project, seemingly not as a designer but more as a tester. So I doubt that the suggestion that the Coot was based on the amphibian troop gliders is valid.

Regardless of Taylor's role, it certainly seems likely that the flotation wings of the Coot were inspired by the configuration of the Navy glider.


Jos Heyman said:
According to the Norton book I referred to earlier (pages 200, 202 and 203) Molt Taylor was a Lieutenant in the US Navy who was involved in training gliders and the GLOMB project, seemingly not as a designer but more as a tester. So I doubt that the suggestion that the Coot was based on the amphibian troop gliders is valid.
Click to expand...

I agree - when you're on a good thing, stick to it.

Mole said:
Regardless of Taylor's role, it certainly seems likely that the flotation wings of the Coot were inspired by the configuration of the Navy glider.
Click to expand...

Here is a photo of the Allied XLRA-1 belonging to the Charles Babb collection at the San Diego Air & Space Museum (SDASM) posted on Flickr.
http://www.flickr.com/photos/sdasmarchives/4815873072/ 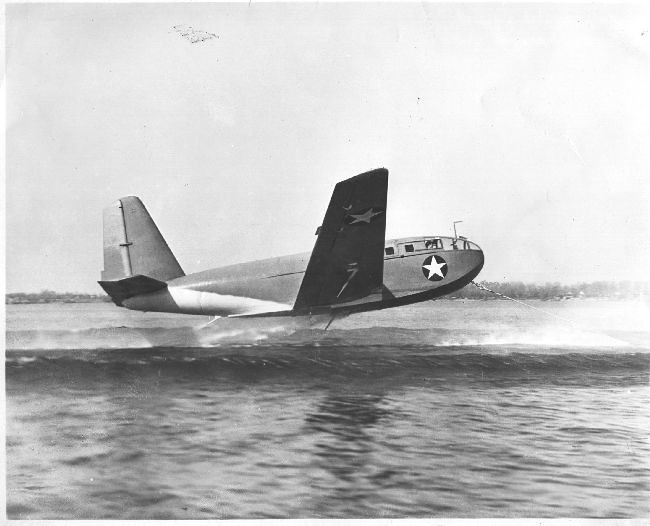 Water-landing gliders were a nice concept, but even Marines eventually figured out that surf was always the heaviest-defended. Leathernecks learned that they suffered fewer casualties landing a mile or three inland from the beach, initially with parachutes, then with gliders, then with helicopters and now with CV-22 Osprey tilt-rotors.

Does anyone have pictures of the Bristol assault glider?

Some time back, I had the opportunity to scan a photo album that one of the engineers on the project kept. Note that the first image is the same one Boxman posted though this one has a airbrushed background.

Model Airplane News January 1944 published these plans for a navy assault glider.
Model plans do not show a step under the wing, even though Mark Nankivil's photos do hint at shallow step, so I suspect that model plans were drawn from distant photographs.
It would need a step to life off from water.

If anyone is aware, the Snead LRH was a project for a US Navy transport glider with a seating capacity for 24 troops and a pair of fuselages joined together by a center wing section and a horizontal stabilizer. The LRH would have had a wingspan of 110 feet, a length of 48 feet and 9 inches, a height of 15 feet, an empty weight of 5,728 pounds, a gross weight of 12,200 pounds, a glide ratio of 18.53:1, and a towing speed of 180 miles per hour. Two prototypes (BuNo 11649/11650) and a static test airframe were ordered in April 1942, and a production contract was placed for 50 aircraft (BuNo 31586/31635). A mockup of the LRH was built and Snead began construction of the first prototype in 1942, but cost overruns caused the US Navy to cancel the LRH production contract and the LRH program before BuNo 11649 could be completed. An image of the first XLRH prototype under construction can be found at this link:

A photo of the LRH mockup is found on page 91 of Bill Norton's book American Military Gliders of WWII.