A collection of Luftwaffe oddities from "L'aviazone nuova"

Going through http://www.oltreilcielo.it/ i found some downloadable pdfs. One of them titled "L'aviazone nuova" has some interesting content. Here's a link to it : https://digilander.libero.it/fme/doc/Fenoglio2.pdf

A few things of note :

Most of the figures in the book are poorly drawn. Some are clear misinterpretations of real projects :
- A9/A10 p.29
- (Rocket X) Triebflugel p.33
- Heinkel T p.66 already discussed in this forum as probably a misinterpreted Skoda Kauba P.14. Curiously, both the Triebflugel and SK P.14 are later discussed more accurately in the same book.
- Lippisch P.13 p.46 interestingly shown with a wing shape similar to that of the preliminary arrow-head shape designed by Lippisch : https://www.secretprojects.co.uk/forum/index.php/topic,3528.msg27954.html#msg27954

There are 3 figures that present projects that are unkown to me :
-A manned "Schmetterling" named Hs 117A p.39

Google translated description text : "Schmetterling with pilot - A version with roughly double dimensions with pilot on board was also tested. The pilot post was put immediately behind the explosive charge at the barycenter of the device. An ejector seat should catapult the pilot once the bomb is directed to the target. The device was launched in flight by the normal Dornier 217. Autonomy 60km, speed 900 km h, It was abandoned because it gave rise to dangerous vibrations."
Click to expand...

reminiscent of the Me 163 in a first version, two Argus pulsoreactors were mounted almost at the wing root, but they resulted in a strong fuel consumption and strong vibrations in the propulsive complex that transmit- ted the entire structure in order to preserve the flight sieety.
the new type had wings with 45 ° arrow the horizontal plane with strong transversal V. The fuselage contained a 500 kg bomb in its chamber closed by doors. A jet engine placed after the pilot seat received air from sockets placed on the wings, underneath the vent nozzle, was another small nozzle which was used for an auxiliary rocket motor. Retractable tricycle trolley.
Click to expand...

-Daimler-Benz Project N°4 and N°5. If the drawing presenting this one is founded, it means that the current interpretation of Daimler-Benz Project F is inaccurate and should correspond to an unmanned aircraft instead, whereas 'N°5' is a manned version with additional canopy and vertical rudders. p.88

I'm looking forward for your feedback on this strange document. 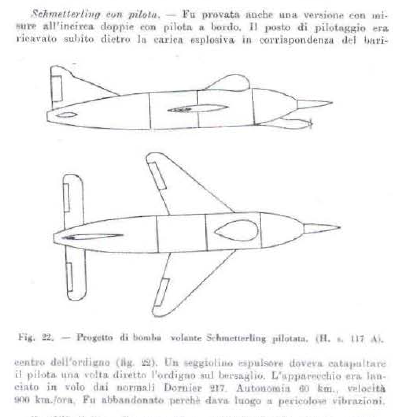 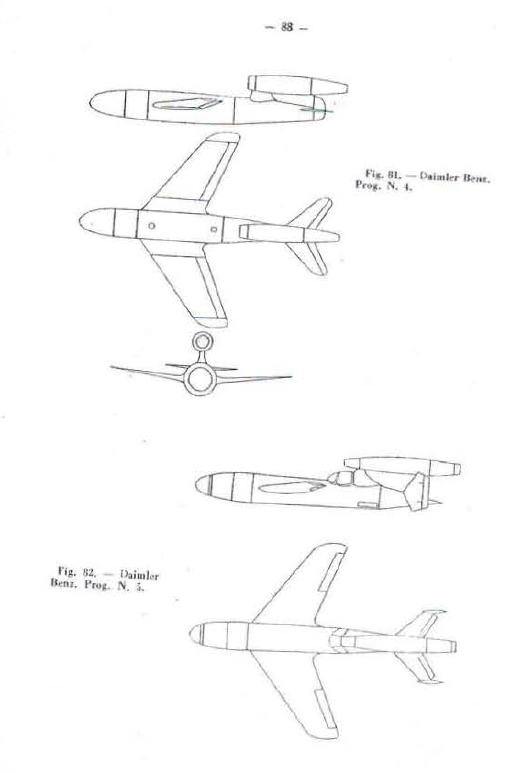 Thanks for sharing!
M

Thank you very much for sharing this.

This is very wonderful, and has more than a few subjects worthy of modelling and study.

- The Focke Wulf design seems to me to be just a poorly drawn Focke-Wulf Fw 283. To a lesser extent it might be a design variant as the canopy is not connected to the vertical fin in the drawing.

- The Daimler-Benz N.2 looks exactly like the parasite jet bomber in what is known as Daimler Benz Project "B".

4- DFS-1068 was mentioned in UK Royal Air Force museum,I spoke about it before
Click to expand...

4- DFS-1068 was mentioned in UK Royal Air Force museum,I spoke about it before
Click to expand...

The story of the Heinkel P 1068 and the DFS P 1068 is interesting. I've done a lot of research on it lately and I'll be in a position to publish it soon.

hesham said:
Amazing find my dear Hamza,
and also we can ask;
...

Is this an indication and/or proof that there was a P.1110 design at some point with this kind of air intakes ?

newsdeskdan said:
The story of the Heinkel P 1068 and the DFS P 1068 is interesting. I've done a lot of research on it lately and I'll be in a position to publish it soon.
Click to expand...

and for my dear Hamza,I think not.

Hamzalippischh said:
Is this an indication and/or proof that there was a P.1110 design at some point with this kind of air intakes ?
Click to expand...