What did the RAF ask for in its A.39/34 spec for Westland to offer the Lysander and did any other companies bid for it?
S

From Air Britain British Aircraft Specifications File. Mostly details of Lysander.
A.39/34 asked for a monoplane to OR.18 to fulfil an "artillery spotting and reconnaissance role over a wide speed range and a variety of duties."
Bristol 148 based on Type 146 to F5/34: two prototypes built. Brief details and a half page picture. One with 840hp Mercury, then Perseus; other with 1058hp Taurus. "Performed well in Squadron handling trials - speed range 62 - 255mph. "
Avro 670 design; Boulton Paul P.81 design; a Fairey design study; a Hawker design 'no details now avaialble'. No more details of these in the Specs File.
Serials allocated to Cierva Gyroplane, but cancelled.
W

Spec A.39/34 called for a two seat army co-operation aircraft

Bristol Type 148 ruled out of competition in September 1936
B

The Specification attracted design tenders from Bristol (the Type 148), Avro (the Type 670), Hawker (a biplane), and Westland (the P.8).
The Hawker tender was rejected out of hand, and the Avro design was not pursued beyond a preliminary sheme, but prototypes were ordered of both the Bristol 148 and the Westland P.8.
Click to expand...

The one with a ventral gunner was built in prototype form and flown because I remember a picture of it crashed, likely from the Putnam WESTLAND AIRCRAFT SINCE... title. It was known, IIRC, as the "Pregnant Perch" for obvious reasons.

I am not familiar with the swept-forward wing on the Mk.II P9105. Was that flown? It would have certainly provided great visibility.

from 'Flypast' volume 2, which is a collected edition of 'Aircraft in Profile' :-

'Pregnant Perch'
"another anti-invasion experiment was the modification of L4673 to include a ventral gun position (also for beach strafing). As suggested by it's soubriquet, the resulting appearance was grotesque, but the experiment was in fact terminated when L4673 suffered an engine failure, the pilot, George Snarey, escaping unhurt after a difficult uphill crash landing under high tension wires."

'Midships Gun Turret'
"Yet another attempt to to provide extra firepower was the mock-up installation of a four gun poweer-operated turret immediately aft of the wing.As it was considered the wing so restricted the field of fire, this installation is believed not to have been flown before it was abandoned."

'Blackburn-Steiger high lift wing'
"For applied research purposes only, P1905 was fitted with a reduced span wing by Blackburns. Full-span flaps and slats were fitted and lateral control was acheived using wing-tip spoilers. designed about a single wing spar, the wing was swept forward 9 degrees and spanned only 38 feet."

'Tandem Wing Lysander'
"As one of a number of anti-invasion experiments to provide a beach-strafing aircraft, the first prototype Lysander,K6127, was provided with an entirely new rear fuselage, shortened to terminate in a power operated four-gun Boulton Paul turret (only a mock-up was ever carried), and supporting a wide-span tandem wing with large twin fins and rudders. Project design work was undertaken at Yeovil early in 1940 but detail work and construction was transferred to Harringtons, a coach-buider in Hove.
Initial flying was carried out by Harald Penrose who reported thta despite considerable aft movement of the c.g. the aircraft handled extremely well."
[note no mention of Delanne in this account.]

The Lysander carried light bombs on stub wings, what would be the effect of the Lysanders bombload (500lb?) on their performance if carried by the F5/34 contenders (or F37/35), possibly with reduced guns/cannon?
P

The Lysander was about the same size overall as the P.9 and ultimately the Whirlwind, what if Westland got imaginative with the spec and offered something like an eralier equivalent to the P.9/Whirlwind but with two seat or one of the other contenders offered a fast two seat twin-engined aircraft??

Here is a picture of the Lysander mockup with the 4-gun Boulton Paul Turret at the rear of the cockpit.

Pictures from the reference mentioned in #5...

Nice. The Blackburn wing version is new to me. Why was it not pursued? Were the flight characteristics not improved sufficiently to justify the change?

Star, as is mentioned in #5, 'For applied research purposes only,', I think the idea was to test technologies for future aircraft, rather than upgrade the Lysander itself. As the standard Lysander already had amazing low-speed abilities, it was the obvious choice for the test-bed.

I wonder if the RN ever showed any interest in the Lysander? Its amazing STOL performance would have made it ideal as a light spotting aircraft, I'd have thought. It could have taken off and landed on a small platform on even quite small ships if underway.
K

I was thinking the same thing. Not invented here perhaps. It might of made a decent anti-sub a/c for convoy escorts.

From patent GB526946, applied for in early 1939, it seems that Westland were considering a retractable undercarriage for the Lysander (the drawing definitely shows the Lysander's structure). The wheels would have been housed in the fuselage alongside the fuel tank. 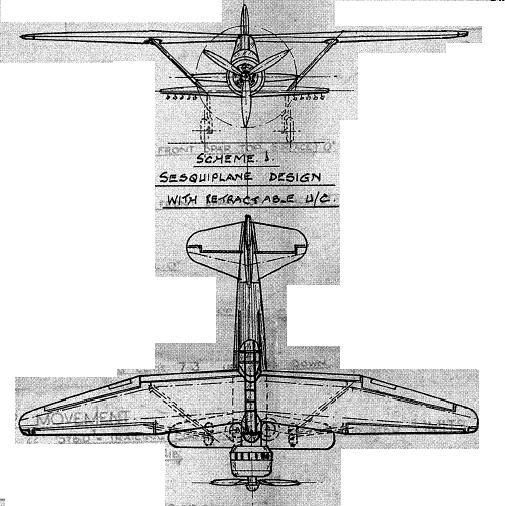 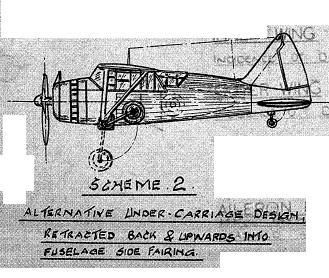 During early 1940, Westland's Chief Designer Petter and test pilot Penrose flew to Paris to visit Delanne, who was working on a light-weight aerodynamic prototype of a tandem wing at the Arsenal factory. Delanne flew the light-weight model a bit and had almost completed a full-scale, tandem-wing, two-seater fighter prototype when Germany invaded. Notsis completed the Delanne Arsenal prototype and test flew it in France before ferrying it to Germany for further testing.
I question the logic of rear-facing guns to strafe beaches. Because he lacks forward visibility, the gunner only has a few seconds to acquire and fire on targets. OTOH The pilot has plenty of time to acquire, aim and fire at targets with his fixed, forward-firing guns.

In the end, I think that the Delanne Lysander was more of a what-if project to test the Delanne tandem-wing configuration. The turret was just a convenient balance weight.
I wonder if a Delanne Lysander spy-carrier might have been quicker to load than the slightly modified Lysanders that supported French resistance fighters. Removing the turret would allow rapid unloading of bulky supplies and rapid loading of stretchers.
Share:
Facebook Twitter Reddit Pinterest Tumblr WhatsApp Email Share Link