1n the late 1960’s and early 1970’s the US became very concerned about the growing accuracy of the Soviets new and future ICBM’s and SLBM’s.
This accuracy would threaten the Strategic Air Commands (SACs) fixed ICBM silo fields in a ‘first strike’.
The USAF looked into numerous options to counter this new threat to its primary nuclear delivery system – the Titan and Minuteman ICBM’s
One of the options that was seriously considered by SAC was to air-launch an ICBM from a large aircraft – this eliminating the risk of SAC’s ICBM’s being destroyed on the ground, for the ICBM’s would be airborne around the clock.
So serious was the SAC, that they put out a ‘Request for Proposal’ for a ‘Strategic Weapons Launcher’ (SWL).
The aircraft designs looked at was a modified Boeing B747F and a Lockheed C-5 Galaxy.
I believe that tests were carried out with Minuteman ICBM’s being airdropped and launched in trials from a C-5 Galaxy

There are two images from the Warbird Tech book on the C-5 Galaxy about this. The first image is a C-5 with a shortened fuselage to eject the ICBM out the back. The second one is a bit more fanciful, it shows what looks like an SLBM launching out of vertical tubes in the Galaxy's fuselage.

On 24th October 1974 a C-5 air dropped a Minuteman I. Here's the image. Somewhere I have an animation....
Interesting information can be found in these two AIAA papers (actually on air drop of launch vehicles, not ICBMs)

Actually, the affair started with Project Strat-X in 1967-68 when McNamara asked for ideas on future strategic systems to counter the growing strenght of Sovet ICBM forces (and of more spefic menaces, like orbital weapons, FOBS and MOBS, attaching from behind the US early warning network facing north). Best known effect of Strat-X was the ULBM project, leading to Tridenti, but there was a lot of other activities, like some creative ICBM basing options. One was air launch, others was like using little submarines in the Great Lakes, another was Nemesis, deep basing in sealed tunnels with automatic launch. Andreas Parsch has something on this, I suppose. All of those schemes, and new ones, resurfaced during the MX-basing debate. There is a specific study by the now defuct US Congress Office of Technological Assesment. Try Google "MX basing mode", Carnegie edu (f I remeber well) has a complete PDF collection of OTA studies online.

Something from last year:

10/7/05 - EDWARDS AIR FORCE BASE, Calif. - Soaring 6,000 feet above the sun-baked California desert, a pair of Edwards aircraft - a C-17 Globemaster III shadowed by a C-12 observer aircraft - carried out an unusual mission with an even more unusual cargo the morning of Sept. 29.

The rear of the aircraft yawned open, and at the prompt of "five, four, three, two, one, green light," the loadmasters released the restraints and a 65-foot rocket slid out the back of the aircraft and began its descent to the desert floor.

The drop was a test mission - the first of a series dubbed the Falcon Small Launch Vehicle, or SLV, program. This is a joint venture between the Defense Advanced Research Projects Agency and the Air Force, designed to develop a new method of putting a 1,000-pound payload into low-earth orbit.

This first test was a successful drop of a mock-up, an inert version of a QuickReach Booster rocket designed and built by AirLaunch LLC. It was ballasted with water tanks to increase its weight to 50,000 pounds, about two-thirds the weight of an actual booster, according to an AirLaunch press release.

To compensate for the difference in weight and the center of gravity, the aircraft was put on autopilot at the moment of the release, said test pilot Maj. Landon Henderson of the 418th Flight Test Squadron.

"Fifty-thousand pounds going out the back is a pretty big change," he said.

Major Henderson said this flight was doubly exciting for him, as the mission was fun, plus it was his final flight at Edwards before being reassigned.

The test vehicle is also the longest article ever dropped from a C-17, said Gary Briscoe of Boeing, who was the head loadmaster on the aircraft.

"It was a picture-perfect airdrop," he said.

Another unique aspect of this mission was the method of getting the test vehicle out of the C-17. In most airdrops, the cargo is strapped to pallets, and the whole package is ejected from the aircraft.

"For this test, a system of rollers was developed to guide the inert rocket out of the aircraft," said Chris Webber, test project engineer for the 418th FLTS. "This was quite an exciting event. It ended up going out very clean … but there's always that anticipation of the unknown."

The Falcon SLV program is ultimately aimed toward affordable space lift. The current price of launching a payload can be $20 million or more. Completion of the Falcon project should reduce that price tag to less than $5 million.

Steve Walker, DARPA's program manager for the Falcon SLV, said the developing capability will give U.S. forces a huge advantage because of its affordability and flexibility.

The affordability of the system is enhanced by its simplicity, according to DARPA. Since traditional rockets launch from the ground, a complicated and expensive rocket nozzle must be used to compensate for altitude variation.

"Because the rocket is launched at altitude, it takes advantage of higher performing and extremely simple nozzles, which can be optimized for the higher altitude condition," said Mr. Walker. "Also, propane fuel can be self pressurized at that altitude, so no turbopumps or pressure feed systems are required to force propellant into the combustion chamber."

Another advantage to launching a satellite by air is the launch location and time is limitless. Currently, rocket launches are dictated by the location of launch facilities and a host of other factors including weather. By putting the system on a C-17, there is no limit to geographic location, and the aircraft can fly away from or above the weather.

"The Airlaunch rocket can be flown anywhere in the world in any unmodified C-17," Mr. Walker said. "This capability can be used by other services, especially the Army, to put tactical intelligence, surveillance and reconnaissance satellites into low earth orbit. These tactical satellites could be used and controlled by combatant commanders, supplying the frontline warfighter with on-orbit ISR capability."

This first drop, dropping a mock- up from 6,000 feet up, was designed to test the safety of the release system, according to program officials. Future drops will be at increasingly high altitudes, ultimately testing a drop of a live rocket, which will launch at altitude after leaving the aircraft.

The Minuteman ICBM launch was performed just prior to the SALT treaty talks- he program was accorded a national priority and completed in only 70 days from start to launch only to be bargained away at the SALT treaty negotiations- which I had read that some say was the intent all along.

Finally got me a scanner!

Here's the two concepts in question from the book I mentioned: 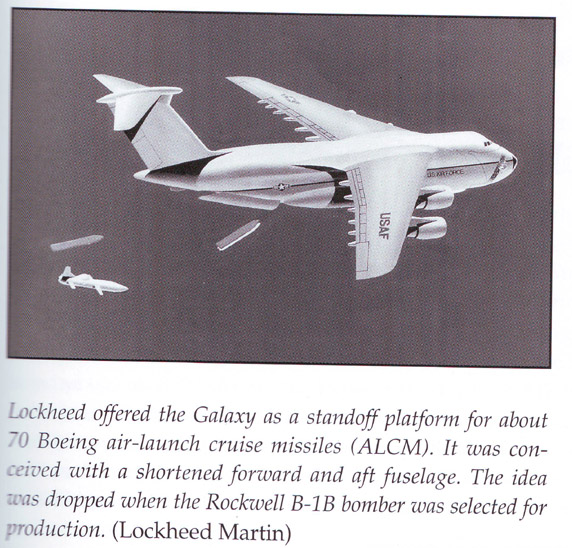 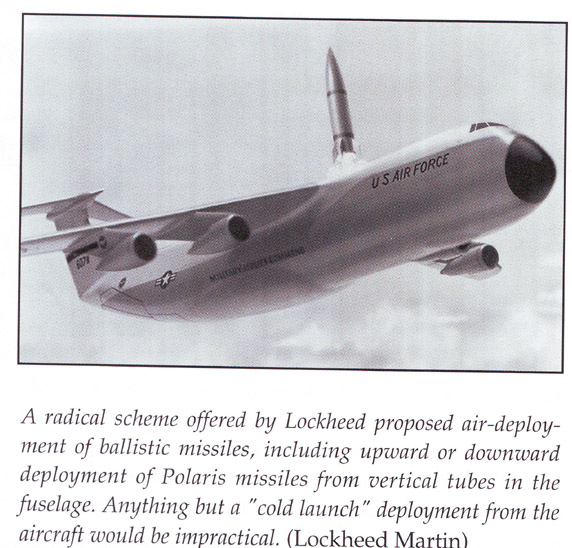 Was this posted already?

Photo and video of Minuteman from C-5: 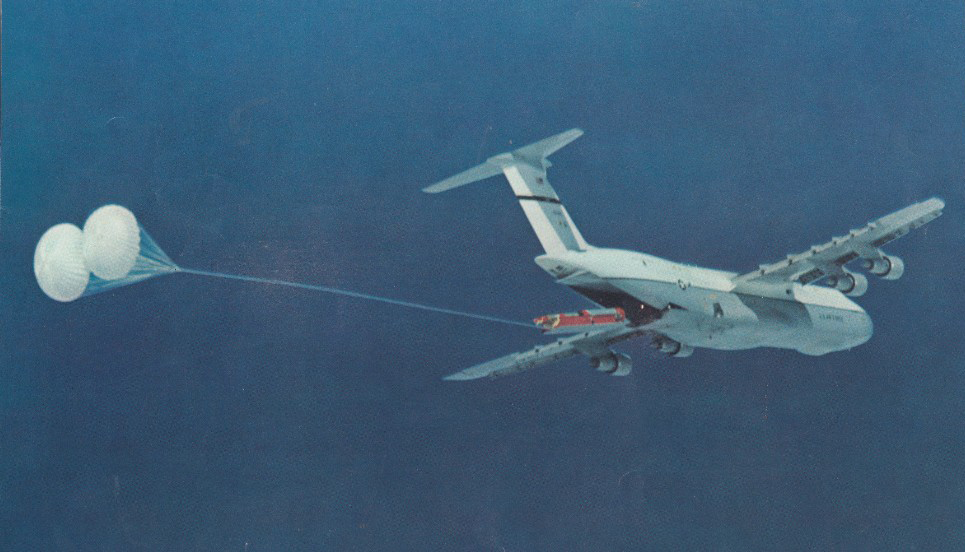 Great project feed. I'm reading Eric Schlosser's book on Command and Control. Has anyone thoughts on how his books threads through those attempts to insert more safety and control over all SAC warheads, verses the R&D race on delivery mechanisms to launch them?. The latter seems to take all the spotlight and budget, the former not. Has anyone read the book? and or does any have views. Probably needs to go to another forum on this, but the whole development of Strategic Weapons and how they are deployed since 1945 is quite a roller coaster. This book is a nice if not gripping summary of the US side.
Share:
Facebook Twitter Reddit Pinterest Tumblr WhatsApp Email Share Link