Anyone know if there has been a book released on Wasserfall?

No book that I know of, but it's been described in several - all long out of print. I've got a data table I could scan as a graphic.

Looks a bit like the A5 research rocket IMO.

Wasserfall was an anti-aircraft development of the V2 rocket ;D


Barrington Bond said:
Anyone know if there has been a book released on Wasserfall?
Click to expand...

There's some info in German Guided Missiles by Heinz J. Nowarra. Pretty interesting book, I got a copy from the USAF Museum bookstore.
J

I will contribute with two drawings

Re: Wasserfall (surface to surface)

I have found some really interesting!
http://www.team-delta.de/Anm/C2.htm

At the bottom of the page is a little article about the Surface-to-Surface
variant of the "Wasserfall" rocket, also called "KLEINER WASSERFALL"
This version should be a little bit smaller than the normal Wassefall,
but with a 300kg Warhead and some powder-rockets for supersonic cruise at low altitude.

What about these projects ? Is there anybody who can help me with these projects!
Thanks in advance for every information or picture !

From what I gather from that German article, the powder things were boosters that enabled the wasserfall to go supersonic with the big payload - not related to any cruise thing.

It's not a secret project - it's a common artillery item - a cruciform base which could be added to a fixed type lower carriage (pedestal) of a gun - for example an 8,8 cm Flak 37/2 - to make it mobile, possible for use in a field instead of specially prepared positions with concrete foundations only. It was really popular practice from some late 1944 when many guns were moved from AA defense to frontline combat.
According to Hahn, the Raketengeschuetz 1000 was simply a rail type launcher for the Wasserfall mounted on the Behelfslafettenkreuz 3741.

Thanks for information about that! Grzesio Are there some Pictures ?

Behelslafette (Link removed) Could it be such one ?

Exactly, that's the thing. Similar Lafette was also used for improvised AT guns made from 8,8 cm Pak 43 from the Jagdpanther tank destroyer.
But - do you probably remember pictures of Schmetterling launcher mounted on a two axle undercarriage? Griehl in his not too impressive book "Das grosse Buch der Flak" calls this launcher "Raketenwerfer 1000" - and the launcher is mounted on the Behelfslafettenkreuz indeed. Another puzzle.

As you can see here http://www.portierramaryaire.com/imagenes/hs117.jpg, the launcher is mounted on an artillery-type fixed lower carriage bolted to a foundation. And so, the carriage could be mounted on a Behelfslafettenkreuz (as illustrated) for a mobile role. What puzzles me, is the name - Raketenwerfer 1000 or RW 1000 for the Schmetterling and Raketengeschuetz 1000 for the Wasserfall. I just wonder if it's not the same launcher with mistaken purpose? :-\

Now, I am very confused !?!?! So a Schmetterling Launcher should be able to fire a Wasserfall!

take a look
http://www.ausairpower.net/DT-MS-1006.pdf
and

There was also a C-3 rocket ? It should be a two-stage variant of the C-2 Wasserfall.
Someone knows more ?

The C 3 was to be developed by Rheinmetall, I think. The rocket was still planned for production in November 1944, but was eventually cancelled by Kammler not later than on February 6, 1945.

Thanks ! Very interesting ! Someone knows a drawing or a picture of the C-3 ? Or data ?
M

Hi everybody
Some very interesting drawings.
http://www.cockpitinstrumente.de/archiv/Dokumente/ABC/f/Flakraketen/Hs%20117%20Schmetterling/hs%20117%20schmetterling.html
Many greetings
A

Here's a link to photos of a wasserfall on display at the US Ordnance Museum at Abderdeen, Maryland and the same artifact awaiting restoration at the National Museum of the USAF.


Thank you for that link.


Michel Van said:
Wasserfall was an anti-aircraft development of the V2 rocket ;D

BTW, the (Das? Der?) Enzian ground-to-air missile, based on the (manned) Me-163 rocket interceptor, helped USA to develop the Sidewinder air-to-air missile.
J

i look for Information about Wasserfall rocketengine
like the chamber pressure & temperature, Isp, Thrust
were can i find that info?
S

Beginning in early 1943 (one source gives September, 1942 as the starting date), the entire resources of the Peenemunde group were concentrated on the development of an antiaircraft guided rocket first designated C-2 and later Wasserfall. The first experimental firing was made on 28 February 1944. By January, 1945, 25 experimental firings had been made, all but one with radio control. Fifteen of the firings gave satisfactory flight.

The control method was designated "Rheinland" which was to be developed in four stages. In the first stage, the rocket was to be steered by direct radio control according to the eclipse procedure as used for FX1400 and Hs-293 with the aid of optical two-axis tracking apparatus. The Kehl-Strasburg meter-wave control transmitter was to be used. At night searchlight beams were to be used. So far as known at present the tests completed were made with this equipment.

The second stage used radar tracking of missile and target with a suitable visual presentation. A human operator was still used with radio transmission of the control information.

The third stage was the automatic control, the radar-tracking device being coupled through a suitable computer to the control stick.

The fourth stage was beam guiding with a homing device for the final stage of the trajectory.

According to one report (unpublished and unfinished manuscript on "Systems of Beam Guiding" found at LFA Braunschweig), dated 28 March 1945, it had been determined by the Peenemunde group that the control described as the second stage above could not be carried out because of the slowness of the human brain and that therefore the control signals must be formed electrically and transmitted automatically to the missile.

The Peenemunde group developed an infrared proximity fuse for use with Wasserfall.

No data are available to the writer on the production plans for Wasserfall. On 6 February 1945 the SS leader Kammler who had been given authority over the development of guided missiles stated that the Wasserfall project would be closed out at the end of the development period, priority being given to unguided rockets such as Taifun.
Click to expand...

Photos from Guidance and Homing of Missiles and Pilotless Aircraft, May 1946:

Stargazer, highly interesting historic report. Thanks for posting.
A

A wonderful book on german guided missiles including wasserfall,V-2 by agard . 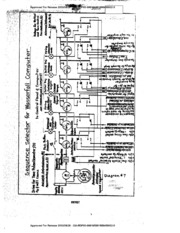 Any info about that seeker?
A

All information regarding german missiles radio control system is described in the agard ag-20 textbook,it is by far the best book known to me to have discussed their guidance in detail.
another website of interest for german missiles is:

Quite probably another paper-only device, that some German engineers were pretending to be working on to avoid being drafted into Volkssturm or something. Must admit, I'm pretty low opinion of German WW2 technology (Wasserfall specifically - this useless missile wasted a lot of American, Soviet and French efforts after war, and the result was only one: "it would be simpler to just design a new one from scratch, than fix all things Germans designed wrong")
G

Maybe, but still nothing impossible. Soviets had working IR seekers for guided bombs in late 40s/early 50s for example.

Japanese made one in 1945 for Ke-Go IR guided bomb (though they didn't have time to put her into service), and US designed at least two IR seekers for Navy & Army guided bomb programs. But this was bomb seekers: they were designed to hit the relatively large target on surface.

Putting IR seeker on Wasserfall would be a two order of magnitude more complex task, because it would need to hit a target in 3D space, homing on it on supersonic speed & dealing with relatively small IR signature. If I recall correctly, the first IR seeker capable of something like that was Sidewinder's one in early 1950s.
G

Well, from guidance law perspective it made little difference if target was moving in air or was standing on ground. Aerial target is even simpler in fact due to being point target at low contrast background. Anyways, I might quess that this was simple lead sulfide based AM-modulated seeker, like all those zero and first gen seekers. Still interesting to know if they used some unusual solutions in it.
Share:
Facebook Twitter Reddit Pinterest Tumblr WhatsApp Email Share Link