Navweaps (which I’m sure we’re all familiar with) lists something called the Mk-47 torpedo. It says the program was terminated in favor the Mk 48, so it probably ended sometime around the Mk 48 began development (1970). Furthermore, my 14th Edition of Ships and Aircraft of the US Fleet (1986) lists something called the “Anti-Surface Warfare a Torpedo beint developed as a cheap way of killing surface vessels. Does anyone know anything about these torpedoes? 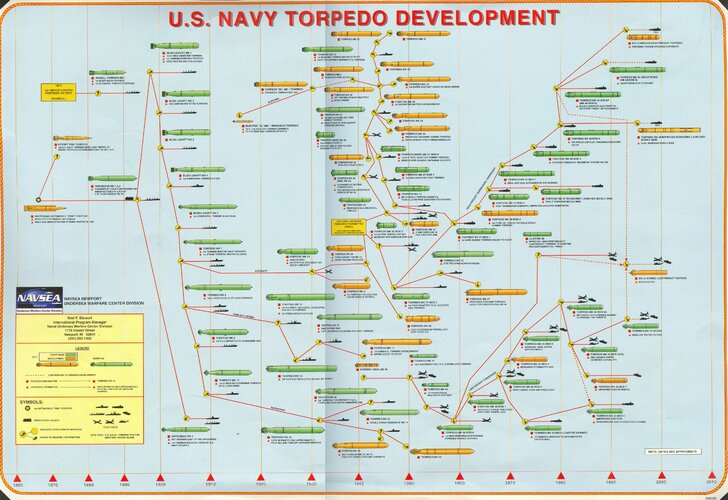 There's this chart from Navweaps which suggests it's a Mk 45 development.

Norman Friedman's British Submarines of the Cold War Era mentions British attempts to join an American program for an anti-ship torpedo. I'll dig it out later and write up any details.

A Brief History of US Navy Torpedo Development doesn't mention anything more than what you have already posted here.

This is all I have, maybe there is what you are looking for.

Found the relevant sections of Friedman.

The US Navy began a programme called SLAST (Submarine-Launched Anti-Ship Torpedo) or EX-13 which was to replace the cancelled Mk 47 (EX-12). In 1963 the Royal Navy sought to participate in the development of this torpedo, and in 1965, offered to design the pump-jet for the new weapon.

Initially the US decided to go with an approach offered by the Bureau of Naval Weapons, using EX-10 (Mk 48) technology, with the weapon being expected to enter service in 1970 if production began before the end of Operational Evaluation.

It was expected that torpedo would have a range of 15,000 yards at 45 knots, travelling at a depth of 50ft to reduce the wake, with provision for a 60 knot burst. Terminal homing would be passive, and the warhead would be 500lbs of PBX. The British observed that this was just EX-12 (Mk 47) with a pump-jet propulsor. The US issued a Advanced Development Objective in March 1965, but refused to describe it as an urgent program. In 1966 funding to EX-13 was cut, and the program was refocused on general torpedo development, with the program eventually being cancelled in April 1967.
F