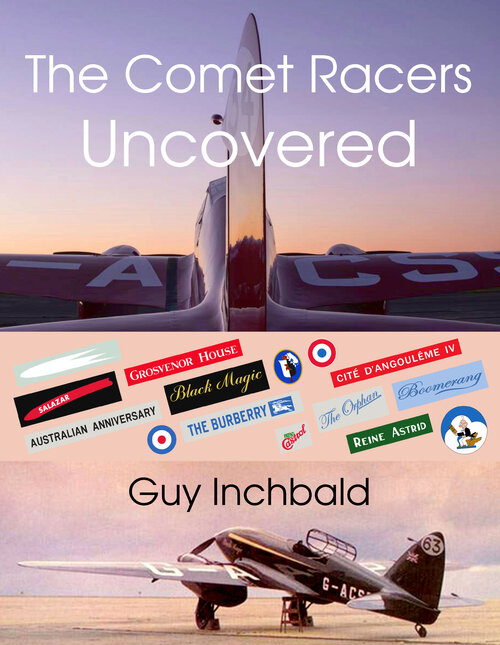 I have just published The Comet Racers Uncovered, a 48-page book on the de Havilland DH.88 Comet racers.

The story of the iconic winner of the greatest air race ever at a pivotal moment in aviation history. It has never been fully told, those of its stablemates even less so. Only five de Havilland DH.88 Comets were ever built. With one restored to flying condition and another on the way, the ever-growing community of enthusiasts have, bit by bit, been unearthing the astonishing truth. This 48-page book focuses on the new, the arcane, and the cultural heritage of perhaps the most beautiful aeroplanes ever made. It is packed with facts and well illustrated with rare and informative photographs.
Copies are available from Lulu.com. The link below should take you to the right page:

Congratulations are in order!

Could you please post a scan of the contents page(s).

These are the section headings:

The Comet Breed also covers the prevailing state of affairs and the Gipsy Six engines.

Amy Johnson was of course Mrs. Mollison at the time. Their G-ACSP Black Magic later became CS-AAJ Salazar, which she tried to buy back. Decades later it became G-ACSP once again.

The Lady in Red is G-ACSS Grosvenor House. It became K5084 and then G-ACSS again, in which guise it was both created and given much attention by Essex Aero, before being written off and eventually being re-registered yet again.

The first mail plane is G-ACSR. It went on to become F-ANPY and (as identified correctly here for the first time) in due course the military H608. The second was built as F-ANPZ, similarly redesignated H609.

G-ADEF was the short-lived Boomerang.

Five and a half pages of tabulated facts and figures.

Some eight projects, derivatives and replicas are described.

The copies and models represent much of the cultural heritage described in the book, from Art Deco icons to comic-book cameos.

The back cover comprises coloured three-view drawings of the many liveries and equipment variations. They are rather small, but it was the only way to fit it all in.

Much of the information and many photograph are rare, or hitherto published only in French or not at all.

I received my copy today and I'm very happy with it, a good standard of paper and print. I'll read through later when I have time to do so but, thanks Guy, well worth the outlay.

No more than the book deserves. Credit seriously earned in the making of too.

Thanks for your patronising post. I take the view of facts that a court does. There are facts - and there is hearsay. It may be a 'fact' that stuff is published in books, magazines and pamphlets - often many years after the events described - often by people who were not even present. That manifestly does not mean that the information printed in these publications are themselves 'facts'. This is precisely the trap that Wikipedia constantly falls into. I have books full of notes relating to errors contained therein. I'll stick with technical publications - the hardware under my hands - and first-hand accounts - the rest I take with a large pinch of salt. You can quote and reference all the books in existence - but if the information in them is duff, it's 'Garbage-in, garbage-out'.

Nor are you yourself immune from errors and flights of fancy yourself. I genuinely enjoyed reading your pamphlet on the Comet, but it is itself littered with factual errors and 'imaginings' - though not much different to many other similar articles and books. These are precisely the sorts of errors you are accusing me of - errors, flights of fancy and presumptions.... Take just these few sample pages for example;-

P9;-
The chart at the bottom of this page contains a number of errors and jumbling-up of the correct data.
(Figures taken direct from DH manuals.)


The Devils In The Detail. I look forward to seeing evidence of what splines the R had. 'Heavy Hamilton Splines' - where is this data...? 'By default' tells us..... nothing.
Seriously - don't get misled by the SKETCH on P64 of the October 31st 1934 issue of The Aeroplane. The apparent length of the end of the crankshaft is a complete DISTORTION.
P66 of the very same issue of The Aeroplane carries an official DH drawing of the 'R'. I have placed beneath it (See photos attached.), at the same scale, the drawing of a QII (Same as a SII for these purposes, as the crank end is identical.). Note that the splined crankshaft end of the QII shaft matches very closely the length of the adapter shown on the 'R' - proving conclusively the artistic distortion I mention above.
The diameter of the adapter for the Ratier looks just right to sleeve over the same diameter shaft as the SII/Q2. So - it matches the basic physical size closeley. 'If it looks like a dog, smells like a dog - and barks like a dog....it's probably a dog'...... Woof-woof....!

'One can imagine" all sorts of things, but the facts do speak for themselves';- Indeed they do....!

I'm happy to learn - whatever splines were fitted - it's alway nice to know the facts. Along the way, 'I'd recommend' that you learn to distinguish facts from heresay 'evidence' - so often broadcast after the participants are no longer available to give evidence. There's more to research than visiting a bookshop.

Just a brief recap: Methuselah's post was moved here from another thread about G-ADOD, a MIles Hawk Speed Six which flew with the Comet's Gipsy Six R engine, and which I mention briefly in the book.

In reply, yes there are errors in the book. Those I am aware of are being collected on my web page about it. To take those mentioned above:

P.9, engine stats. These depend on many factors and different sources can validly cite different numbers under different conditions. The numbers I give are mostly typical of those cited by reliable sources, and it is a mistake to imagine that, because I give a Max RPM and a rated horsepower, these are therefore obtained under the same test conditions. However sources do differ, with the test conditions usually undefined, so sometimes I had to make a judgement."Wrong" can only apply if the stated test conditions are given, which I avoid doing.

P.10:
Carbs: Agreed, the carbs were not turned. A short right-angle corner piece in the ducting was attached to each one, and it was this that was rotated. I need to add this to my list.
Crankshafts: I have this documented in exhaustive detail. Principal sources are contemporary articles in Aeroplane and Flight, and Doug Taylor's biography of Halford. My book is on the Comets, it does not cover the engines in detail. Suffice to say that the criticisms offered are misplaced.
Props: Methuselah is unable to accept that Hamilton's provided ready-made hydraulically-operated variable-pitch props for the Comets, despite them being clearly identifiable in the photos I include on P.13, and Sharp's extensive account of their selection and acquisition in his history of the company. Similarly, he is unable to accept that Halford splined the Six R crankshafts specifically to accept these props.

P.11:
G-ADEF carbs - see P.10 above.
G-ADEF "spline" for the Six I: This is well spotted. The Six I had a tapered fitting not splined. The same mistake appears in the table on P.9. Maybe elsewhere, too. Another one for my list.
Was the Gipsy Six II a clean-sheet design? Conceptually, certainly not; Halford developed it from the original as a baseline, with very specific changes in mind.

P.12:
One of those changes just alluded to was to accept leaded fuels; the Six R required unleaded, the Six II could take either. As Flight put it, "[it] differs from the Series I engine in that it has been developed to use the higher octane tetra-ethyl leaded fuels." Dickering over the syntactic expression of this point is of no interest to me.
Geared drive on the Six II? I always thought not, then some last-minute discovery made me add it. Darned if I can recall what it was, put that down as a definite maybe for now.
Queen 30. What is the difference between almost new and new? See above note re. dickering.

P.21:
State of Henshaw's Vega Gull. In Flight of the Mew Gull , pp.105-6 (John Murray Hbk Edn) he describes its purchase and fitting-out, including his "intention to buy a Vega Gull fitted out with long-range tanks". It was registered in his name on 7-1-1938 and subsequently fitted-out. He may well have flown it briefly around the time of registration, but that was not why he bought it and is not the point here.
Which Gardner? Henshaw (p.106) writes that it was Charles. If I am wrong, I m in good company.
Turkey? Another good spot, according to Henshaw it was the Pelopponese. No. 3 for my collection.

P.22:
London's viewpoint is taken from an account he gave in a local newspaper, a copy of which I attach.

The Six R spline? Attached is a photo of it: the spline is distinctly longer in proportion than the later ones. It supports the version of reality to be found in the mainstream publications. Don't trust cutaways? Maybe not, but as a breed these draughtsmen are intensely proud of their technical quality and you cannot just brush them off as artistic license. Attached is another one displaying the same long spline. Then again, I would never measure dimensions off a drawing. But a photo can be trusted rather more. And the example at Old Warden, in the flesh (last image), even more so. Let us defer to the day we can peel back its Ratier adapter and expose the truth.