AN/AWW-14(V) thank you for posting. a big deal for this forum.
a huge oppurtunity missed w/ the death of this technology path in favor Javelin etc. There are slicker ways to defeat rective armor than brute KE.

Javelin is what Tank Breaker looks like when operationalized.
J

beg to differ, Javelin weighs 49lbs twice the Hughes Tank Breaker, J has whole extra inch in diameter, 4 vs 5"and is a inch longer. Javelin has dual warhead, sure, (extra KE is not the solution better tech and targeting) but was/is going in wrong technical direction. A Tank Breaker size of the never adopted Viper launcher is where we should be. The PRC has 60mm AT missile.
A

The U.S. Army and Raytheon plan to enter production of a new Lightweight Command Launch Unit. 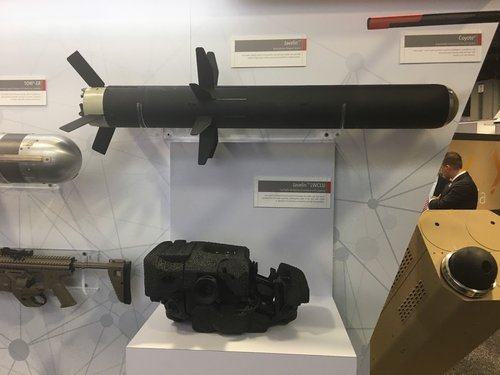 The U.S. Army and Raytheon plan to enter production of a new Lightweight Command Launch Unit for the Javelin designed to bring a new level of “precision lethality to an infantry squad.” The new Lightweight CLU unit enables much greater standoff distance for infantry attacking tanks by doubling the attack range from 2.5km to 4.5km, developers said.

"Javelin's strategy is to incrementally develop, test, and integrate new technology into the system. Javelin recently completed a development program that included a new warhead, which improves lethality against soft targets," the Javelin Product Office told Warrior in a statement.

“The CLU sensor has a constant zoom so you don’t have to flip from a wide field of view to a narrow field of view. That is all done inside the sensors for you - precision targeting the entire time,” he said.

“Our doctrine is we visually ID before we shoot. In this case you have an electronic sensor providing targeting data to the gunner,” Boccardi said.

The emerging Lightweight CLU weapon will first go to U.S. Special Operations Forces and Army Infantry Brigade Combat Teams before possibly reaching a wider distribution. Both Army Infantry and SOF often operate on foot in small units such as A-teams, recon units or soldiers tasked with clearing buildings in urban areas. Low Rate Initial Production of the Lightweight CLU is slated for 2021. There is also a command and control “networking” dimension to the CLU, as it can operate with a Sentinel radar in some instances and use its sensing systems to share targeting information.