Russia’s Proton-M rocket – after a lengthy standdown – finally launched the Spektr-RG observatory on Saturday at 12:30 UTC. Proton was expected to lift off from the Baikonur Cosmodrome last month before a delay was required to replace some faulty batteries on the spacecraft. With the aid of a Blok DM-03 upper stage, this mission deployed its payload two hours after launch.
The Spektr-RG satellite is an international collaboration led by the Russian Federal Space Agency, Roskosmos in partnership with the German Aerospace Centre, DLR, and universities and research institutes in both Russia and Germany. It is the second of three satellites in Roskosmos’ Spektr series, which aims to survey the cosmos across a wide range of electromagnetic frequencies. Spektr-RG covers the x-ray region of the spectrum.
Click to expand... 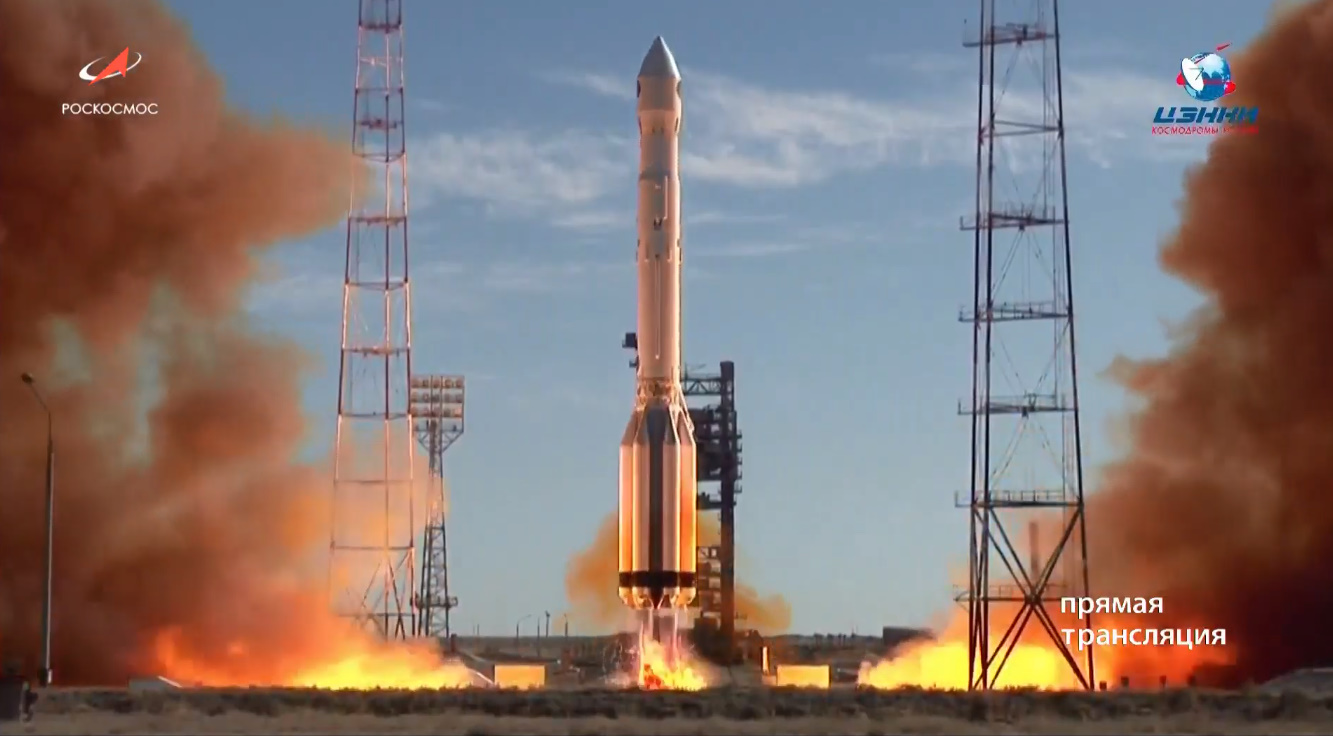 The correction included giving two impulses to Spektr-RG propulsion system during a 4-hour interval. The operation was successful; all the spacecraft systems function as planned. The spacecraft continues its journey towards the L2 Sun – Earth system libration point, where it is to carry out explorations to answer some questions important for the world scientific society:

What is the history of dark matter influence on the large-scale Universe structure forming;

What is the cosmological evolution of supermassive black holes?

The Spektr-RG spacecraft was created in cooperation with Germany as part of Russia’s Federal Space Program on behalf of the Russian Academy of Sciences. The space observatory is equipped with two unique X-ray telescopes: ART-XC (Russia) and eROSITA (Germany), its functioning based on oblique incidence principle. The telescopes are installed on the Navigator platform (NPO Lavochkin, Russia), which had been adapted to meet the project tasks.

Both ART-XC and eROSITA covers are now open! Thanks to the teams at IKI, NPOL at MPE. Here is a real video of the test done in Munich. Now @eROSITA_SRG will prepare the commissioning of the cameras. The first X-ray photons on the detectors will arrive in about one month.
Click to expand...

One month later after the launch from the Baikonur Cosmodrome, on August 13, 2019 the Spektr-RG space observatory sent its first astronomic “telegram” on observing the supermassive black hole Sagittarius A* in the center of the Milky Way.

The Spektr-RG observatory is now on its way to the L2 Sun – Earth system libration point area and has carried out the test observation of the Galactic center region confirming the high activity of the Sagittarius A* supermassive black hole (4 million times heavier than the Sun). The flow observed by the Russian ART-XС telescope is higher than the regular X-Ray luminosity by a factor of 102.

The Sagittarius A* supermassive black hole is usually in a quiet state, however has recently started demonstrating bright blazes (brightness increased by a factor of 100). One of the blazes was observed by ART-XC telescope.

The researchers managed to quickly react to the situation. Other X-Ray observatories (Chandra, NuSTAR, INTEGRAL) have just started focusing on the Galactic center region. ART-XC carried out the observations overnight August 11 into August 12, 2019 and confirmed the blaze. The telescope observed the area for 50 ks. The scientists plan to continue the observations today and tomorrow.

All the spacecraft systems are working as expected, the ART-XC telescope calibration is underway, eRosita telescope detectors are being prepared to be switched on. The spacecraft is more than 1,430 thousand kilometers away from the Earth. The active scientific observation program has already begun. Besides observing the Galactic center region, the spacecraft received the data on bright sources of X-Ray radiation: Cygnus X-1, Centaurus X-3, Centaurus A. One month later after the launch from the Baikonur Cosmodrome, on August 13, 2019 the Spektr-RG space observatory sent its first astronomic “telegram” on observing the supermassive black hole Sagittarius A* in the center of the Milky Way. The orbital astrophysical Spektr-RG observatory, which is now on its way to the L2 Sun – Earth system libration point area, is carrying out regular observations of the Milky Way center area.

The orbital astrophysical Spektr-RG observatory, which is now on its way to the L2 Sun – Earth system libration point area, is carrying out regular observations of the Milky Way center area.

The spacecraft is observing the bright source, which is the superposition of the supermassive black hole Sagittarius A* and an extended X-Ray emission of the black hole area 4х8 parsec in size. The photos show the Galactic center region and a bright X-Ray source 1E1743.1-2843 inside. The image received on August 16, 2019 shows the Galactic center region On 22 October 2019, the beautiful first X-ray images of the eROSITA telescope were presented to the public at the Max Planck Institute for Extraterrestrial Physics (MPE) in Garching. After an extended commissioning phase, since October 13 all seven X-ray telescope modules with their custom-designed CCD cameras have been observing the sky simultaneously. The first combined X-ray images of our neighbouring galaxy, the Large Magellanic Cloud, and a pair of interacting clusters of galaxies at a distance of about 800 Million lightyears, show remarkable details and demonstrate the promise of the ambitious science programme planned with the space-borne telescope.
Click to expand... 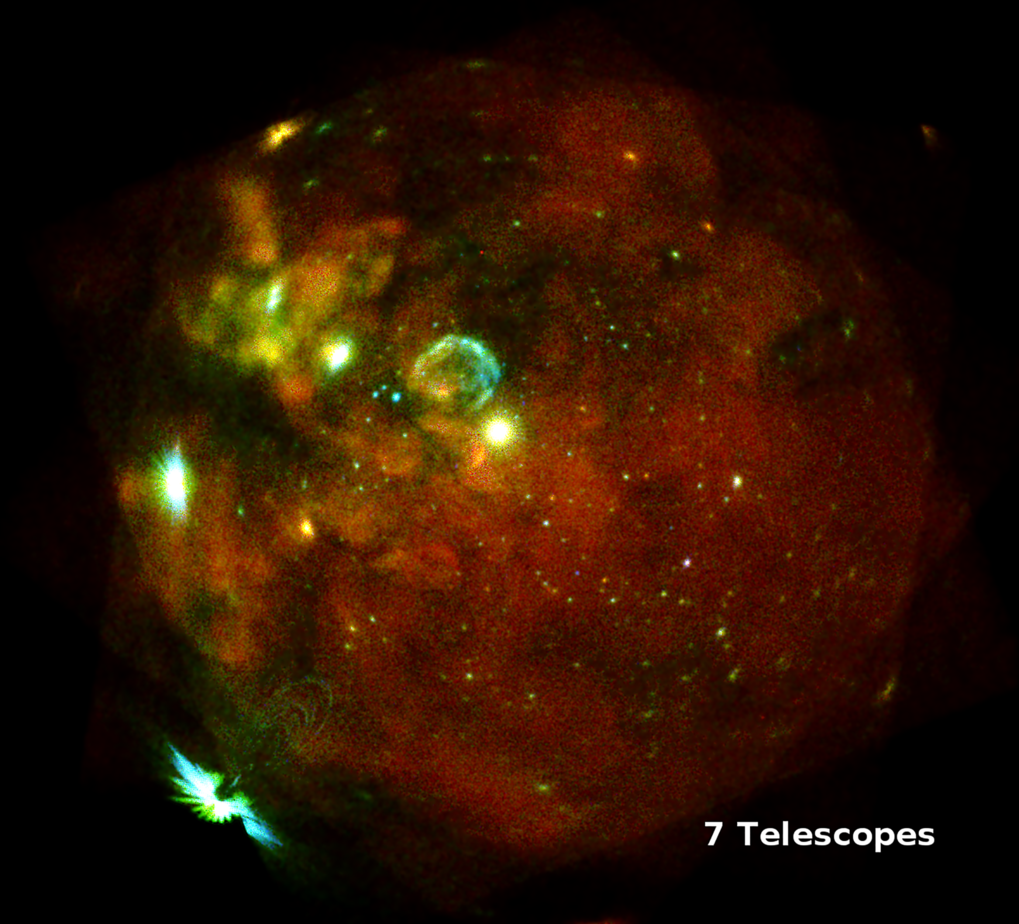 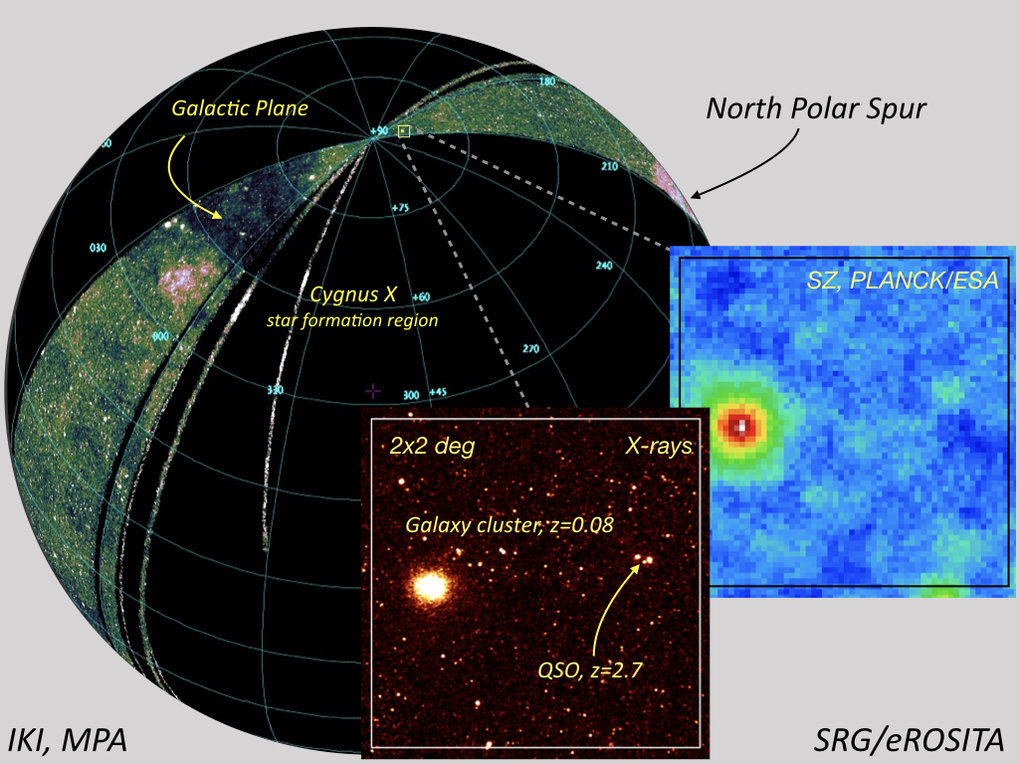 One sixth of the sky with the telescope SRG/eROSITA