Off the top of my head I can think of a number of bush planes, past and present, marketed as being perfect for the short, rough field passenger and cargo hauling on a shoestring life of aid and missionary work. Many of them fulfilled that role ably.

I can also think of a couple that claimed to be designed with such work in mind: the Christavia homebuilt and the AAC Angel STOL twin, for example. On the latter, I have never understood why a low-wing pusher with retractable main gear in front of the props was supposed to be good for rough field work, but that's another thread.

Does anyone know of other aircraft specifically designed with aid or mission work in mind: 1) low cost, both initially and in operation; 2) great short, rough field performance and 3) flexibilty to carry people or cargo or both?

Read 100 times and not one reply...have I stumped the group?

Mole said:
Read 100 times and not one reply...have I stumped the group?
Click to expand...

Ooops, perhaps the Lockspeicer LDA, in exibition at the 1975 Paris Air Show, can be a candidate.

Ah, I was getting worried there for a minute.

I had forgotten about the Lockspeiser LDA-01. My memory says and Wikipedia confirms that the model that actual flew was a "seven-tenths scale research and development aircraft, which was designed and built by David Lockspeiser to prove a concept for a low-cost utility transport." Does anyone have any info (ideally specs and a 3-view) of the planned production model?

Mole said:
Does anyone have any info (ideally specs and a 3-view) of the planned production model?
Click to expand...

Only a 3-view of the prototype.

I was looking this airplane up the other day on the Flight archives. It was marketed as a "flying Land Rover". There are a few articles here and there, but no cutaway, which would have been interesting.
There is also a blurb in "macchine bizzarre nella storia dell'aviazione" by Enzo Angelucci. Just a few technical data. I'll post it when I get to my office on monday.

Thanks Retrofit and AeroFranz. I would be very interested in info on the proposed full-scale version as the design has always seemed a bit odd to me. If the cargo weight was to be placed in the fuselage roughly centered between the cockpit and engine, it seems that the CG would have been awfully far forward. I assume that the weight distribution in the proof of concept model was different and the production model would have moved the wing forward or the engine back some, but I have never actually seen what Lockspeiser had in mind.

Here's a nice article on the Lockspeiser LDA-01. These pics show the removable cargo pod fairly far aft, which may answer my question, but then a great deal of the fuselage seems unused?

it says in my book that the LDA-1 (as opposed to the LDA-01 prototype) was to have the following characteristics:

Thanks, AeroFranz, that's very interesting. Look at that empty/gross weight ratio, wow! Replace the piston engine with a derated Rolls Royce (Allison) 250 turboprop, the empty weight would drop even more and the engine would run on biofuel or what have you. That's about 56 kg fuel per hour at 50% power so you could have a 6 hour endurage with reserves and still carry a metric ton of cargo. Nice!

Thread necromancy, and my own thread to boot, but does anyone have any nice drawings of the FULL-SIZE Lockspeiser LDA-1 as opposed to the 70% scale LDA-01 which actually flew? Thanks!
F

Here's a picture of the Evangel from Aerofiles (see attachment).

I've still got the original brochure of the first model (simply called the Angel) somewhere. When I find it I'll scan it.

I think the Kodiak (Quest Aircraft) was developed with financial support from Missionary and non-profit relief organizations. The Kodiak is in production and I understand that every 10th aircraft is made available for Missionary work at cost price.
I understand that the small Weilage Boon Jr. Helicopter of Mr. Arthur Weilage (Weilage Helicopter Company) was also developed with Missionary work in mind.
A picture of the Evangel 1 (the high wing prototype which preceded the Evangel 4500) is on the evangel4500 site above under prototype.

Mole said:
Thread necromancy, and my own thread to boot, but does anyone have any nice drawings of the FULL-SIZE Lockspeiser LDA-1 as opposed to the 70% scale LDA-01 which actually flew? Thanks!
Click to expand...

Thanks, guys, but I am still looking for othe art on the FULL-SIZE Lockspeiser LDA-1 if anyone has it. As far as I can tell, the art in this thread is for the 70% scale demonstrator. Thanks!
S

Here is a series of pictures of the Angel Aircraft er... Angel. Name of the company, name of the aircraft!

All these pics were taken from the original 4-page promotional brochure, which I'm also adding here in PDF form:

Thanks, Stephane, interesting pics and a neat airplane, though I never understood the logic of putting the props immediately behind the main wheels on an aircraft indended to operate from unimproved strips.

If everyone used logic in aircraft design, this site would be smaller and less interesting than it is.

I would imagine that the pusher configuration was selected for safety - imagine using that extra-wide cabin entry with propellers from a conventional tractor installation spinning less than a foot away...

aim9xray said:
I would imagine that the pusher configuration was selected for safety - imagine using that extra-wide cabin entry with propellers from a conventional tractor installation spinning less than a foot away...
Click to expand...

True enough, but then the extra-wide door could have been behind the wing. 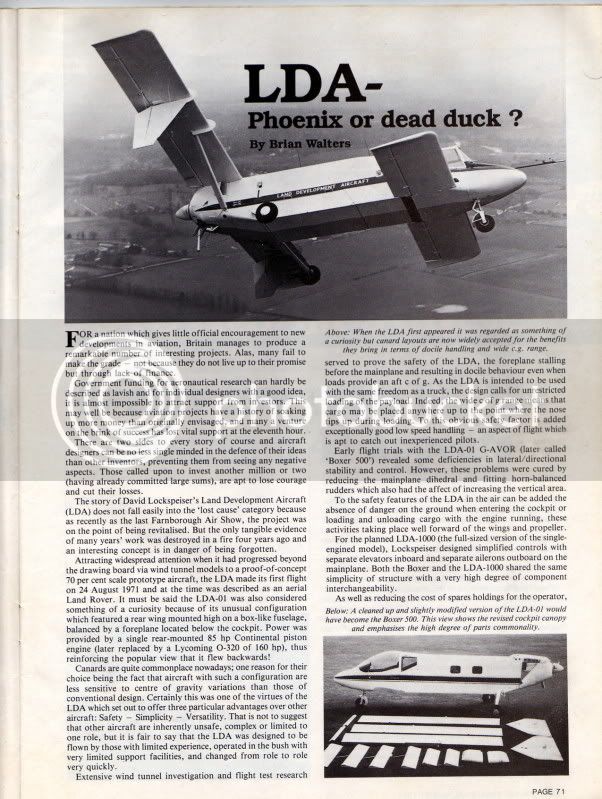 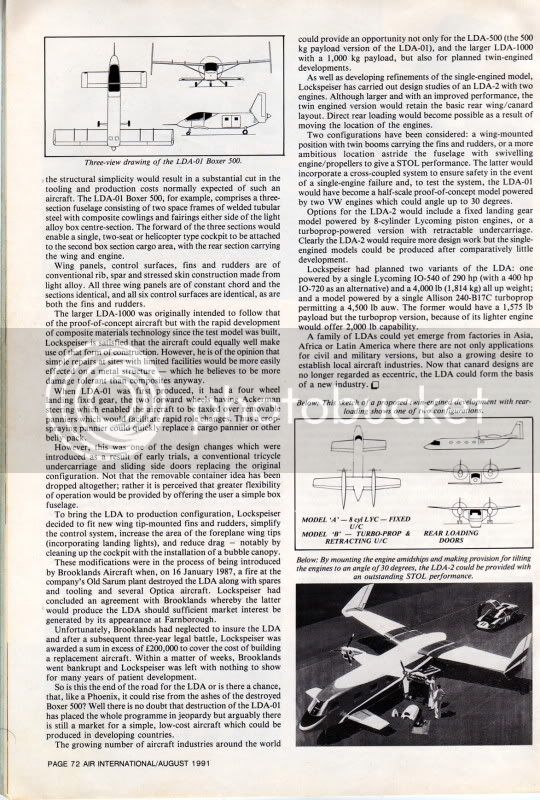 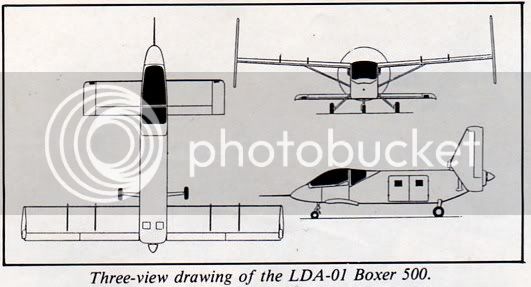 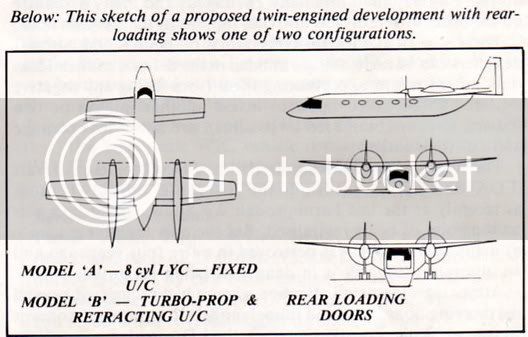 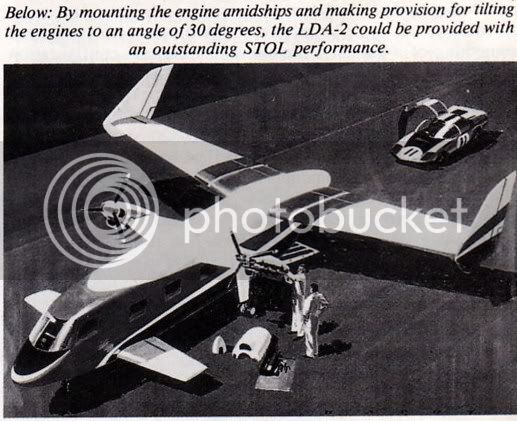 Regarding the bottom illustration; in the future do people drive race cars to the airport, or has the aircraft landed on a racetrack for a little quick engine work?

I rather suspect it's going to be transporting the racing car - bit far from the "helping underdeveloped countries" brief, dont you think though.... ???
M

I realize it's a bit off topic, since it's not a dedicated design, but at one point Hawk marketed their OV-10A kit as a "Patrol and Aid Mission Aircraft". Does anybody know whether such a use was actually contemplated, or whether this version is pure fantasy?

Years ago, I exchanged some letters with Mr Lockspeiser. IIRC, one reason for the 'voluminous' fuselage was that one aircraft would be able to carry complete engines, wing panels etc into rough fields where another was stranded...

martinbayer said:
I realize it's a bit off topic, since it's not a dedicated design, but at one point Hawk marketed their OV-10A kit as a "Patrol and Aid Mission Aircraft". Does anybody know whether such a use was actually contemplated, or whether this version is pure fantasy?

I have a vague memory of a Carter era plan that this was probably related to. I'll see if I can dig up the references.


Nik said:
Years ago, I exchanged some letters with Mr Lockspeiser. IIRC, one reason for the 'voluminous' fuselage was that one aircraft would be able to carry complete engines, wing panels etc into rough fields where another was stranded...
Click to expand...

That was good thinking.

By the way, I suppose the tilt-engined proposal would have been known as the LDA-2 Model 'C', if it had proceeded any further?
K

The Zenith Air STOL CH701, whilst not specifically designed for missionary and aid work, has been extensively utilized in those fields. A homebuilt aircraft with exceptional STOL characteristics.

Haven't been able to dig up that Carter plan yet.

In other news, this may well come under this category: http://www.secretprojects.co.uk/forum/index.php/topic,14035.0.html

"The Aviation Historian" featured a nice piece on David Lockspeiser, who passed away earlier this year. He was quite an aviation legend as a Hawker Hunter test and demonstration pilot. In any case, I found this promotional video for the LDA project. Enjoy!

I just got back from the Reno Air races and Mission aviation Fellowship was showing their Kodiak http://en.wikipedia.org/wiki/Quest_Kodiak a brilliant plane.

The Helio Courier was designed to safely operate in environments requiring STOL capability and to prevent stall/spin crashes ( http://en.wikipedia.org/wiki/Helio_Courier ). It was adopted by the JAARS missionary outreach organization ( https://www.jaars.org/ ) as the most practical way of getting their people and supplies in and out of the remote locations they serve. At one time, they were the largest operator of Helio Couriers. "The HELIO COURIER Ultra C/STOL Aircraft" ( http://www.amazon.com/Helio-Courier-Ultra-stol-Aircraft/dp/0786422890 ) has a chapter on JAARS and their Couriers.

I visited the JAARS booth at Oshkosh last month and they had one there, but said they are being phased out because of the difficulty of getting avgas in remote areas. At one time, they were having to bring in their own avgas to fuel their piston powered aircraft and they are transitioning to turbines when possible, but that is slowed by the initial high cost of turbines.
The turbine advantage is that they can be fueled anywhere that has jet fuel which is anywhere jet airliners operate.

A development they and other piston powered aircraft operators are watching is the development of aero diesel engines that run on jet fuel. They are not as expensive as turbines and have the added advantage of going as much as 60% farther than avgas powered aircraft on the same weight of fuel.

I wonder if electric STOL/VTOL aircraft can make a case in that area. Both manned and unmanned. 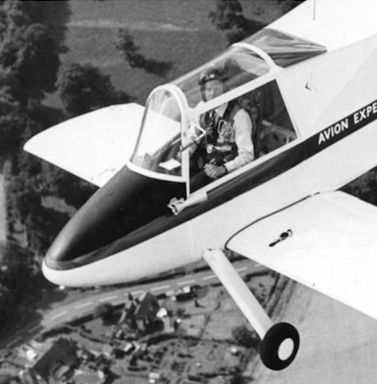 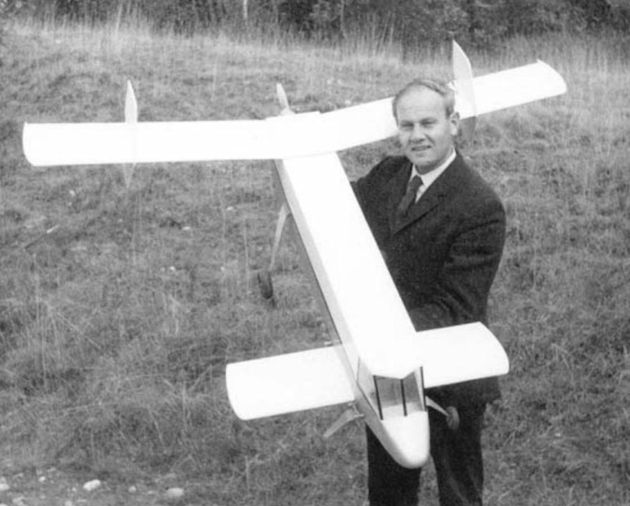 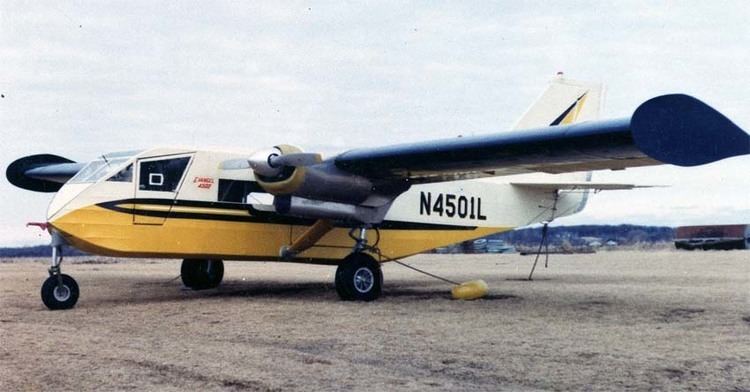 Evangel 4500: “God helps those who help themselves”.

Carl Mortenson was a pilot and aircraft mechanic who flew in the 1950/60s for the mission aviation organization (JAARS) in South America. During that time, Mortenson noticed the need of an affordab…