Wasn't this missile studied for the F-5D Skylancer, then took over by the Canadians for their CF-105 Arrow ? How far did the whole program go ?
T

A comparison of the internal layout with modern ARH missiles is quite telling - the seeker on this very early design is so large that the warhead is located behind the wings and the rocket motor is very short too.

Here's a photo of an F4D Skyray carrying a Sparrow II. For some reason, the original photo title refers to the missile as a Nike.

Trident said:
A comparison of the internal layout with modern ARH missiles is quite telling - the seeker on this very early design is so large that the warhead is located behind the wings and the rocket motor is very short too.
Click to expand...

Most air-to-air missiles have their warheads amidships.
G

Trident said:
A comparison of the internal layout with modern ARH missiles is quite telling - the seeker on this very early design is so large that the warhead is located behind the wings and the rocket motor is very short too.
Click to expand...

Most air-to-air missiles have their warheads amidships.
Click to expand...

Yes, but not that far aft... AIM-120, for example, has a much shorter electronic section (proportional to total length), so the warhead is further forward and the motor is longer. So same layout, but different proportions because the early electronics were much bulkier.

Archibald said:
Wasn't this missile studied for the F-5D Skylancer, then took over by the Canadians for their CF-105 Arrow ? How far did the whole program go ?
Click to expand...

Sparrow II was considered for the Arrow and was trialled on a CF-100. Ultimately the Arrow was to have used 8 Hughes GAR-1 Falcon AAMs, Sparrow II was investigated briefly as a better option. USN killed Sparrow II in 1956, the RCAF dropped it in 1958. Both sides basically killed it due to the problems of making a fully active radar guided AAM in the 1950s.
A

Seems that Canadair got the contract.

I quick search show that the Skylancer had an APQ-64 radar. The Sparrow II was k-band.
Main problems found were
- K-band at the time couldn't see through clouds and rain (pretty annoying)
- active homing on the AMRAAM is only for the final dash on the target, this wasn't known in Sparrow II days
- both APQ-64 and the missile K-band seeker were very limited in performance by 50's electronics, vacuum tubes included.
- range was a miserable 5 nautic miles !

Since the Arrow radar was called ASTRA, I wonder if it was a copy of the APQ-64. What is interesting is that the Arrow nosecone should have been much larger than the Skylancer, considering these aircraft respective sizes... maybe they hoped to boost k-band efficiency through a larger size.
Considering the difficulties encountered by the Sparrow II, it is no surprise it doomed the program. The RCAF evidently fell to the deadly lure of "fire and forget, AMRAAM in the 50's". Truth is, it was exciting, imagine, if they had made it to work, the tactical advantage the Arrow would have had shooting bombers.

Considering the miserable range plus all the seeker issues, Sparrow III was the right choice even with SARH. Considering its pathetic reliability rate in Vietnam, imagine Sparrow II in the same context... better to arm Phantoms with RPG-7s !
Last edited: Sep 14, 2019
F

From the cited doc 6nm is right, and I can't imagine why it would be much more. AIM-7C was publicly credited with about 6-7nm, and I don't think any version of AIM-7 ever reached 60nm, even with the much better seekers and dual-stage motors in the final models. The usual number cited for AIM-7F/M/P is 43nm.
A

plus if the freakkin' K-band seeker couldn't see through rain or clouds... the missile range will be pretty short...

Sparrow II and III comparison from 1957. 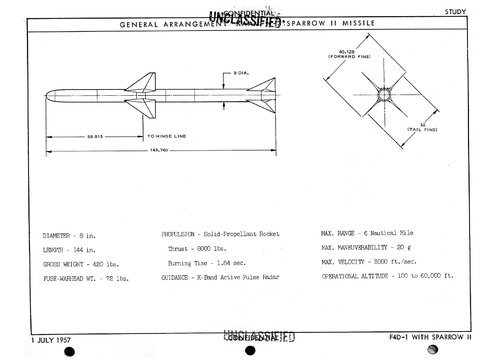 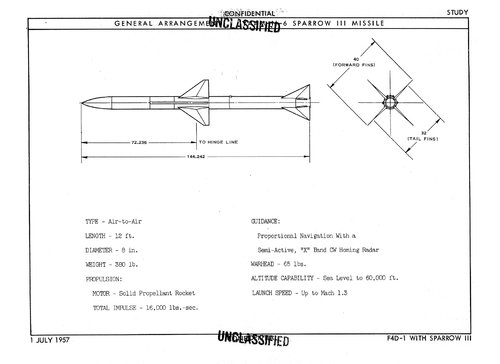 Sparrow faced numerous problems in Vietnam, not least of which is that it was being asked to do something it had never been designed for, because of political constraints. In addition, the repeated launch-dogfight-land sequence for those missiles which were brought back at the end of a mission was also unanticipated, leading to further reliability issues until maintenance was properly addressed. The climate was also not all that friendly to it.

As a missile fired by an air defence interceptor launched from a base in a temperate climate, with relatively relaxed ROE against a bomber-sized target that doesn't share the manoeuvrability of a MiG-17, I think it would be expected to do significantly better.

Radar missiles doing fire and forget off the rack was the siren song that also doomed Red Dean. The difference is that the British didn't have the parallel compromise solution that the SARH versions of AIM-4 represented, and all of Britain's radar-guided missile work went down the drain with the loss of indigenous supersonic fighter development, not to be seen again until after the British had accepted Sparrow and developed Skyflash as an outgrowth of it.