The flight was testing the performance of the new polyamide-based grain that was adopted in place of the hydroxyl-terminated polybutadiene, a form of rubber that was used for the first series of powered tests. Scaled and Virgin, which announced the decision to change to the new fuel in May, made the switch in hopes of providing a longer, more energetic burn with lower thrust oscillations.
Click to expand...

EDIT:
There's already a Wikiarticle on the crash; Here's a couple more related news articles via it (second one is a story from May on the new fuel):

SpaceShipTwo Crash - First Hand Account From Mojave | Video Parabolic Arc managing editor Doug Messier was one of the first on the scene of crash site in California and tells Space.com's @TariqJMalik what he saw.

Cracked grain? Wonder if they exposed any of the 'new' ground test loads to 'altitude' pressure? Any bubbles in the poured grain could expand into cracks ... and the rest is history.

Not near as much of a problem as with a cracked solid rocket grain. With a solid, a crack is that much more surface area, and every bit of surface area is burning. But with a hybrid, the surface area of a crack doesn't necessarily contribute, since the oxidizer has to actually get down into the crack in order to combust.

However, if the crack leads to a chunk of propellant breaking off, it could jam in the throat if it's big enough. And then the chamber pressure will spike and blow the thing to bits.
S

Did I get this bit right? This was the first time SS2 flew both with that propellant AND engine type, right? Was the new engine submitted to sufficient ground testing beforehand?

They stated that there were extensive, successful ground tests beforehand. I recommend we simply await for the results of the official investigation rather than speculate wildly.
S

GTX said:
I recommend we simply await for the results of the official investigation rather than speculate wildly.
Click to expand...

Agreed, but I don't think there was any "wild speculating" on anybody's part so far.

Sir Richard Branson's space tourism company Virgin Galactic has been accused of ignoring a series of warnings that its $500 million rocket was unsafe for flight.


A number of senior aerospace engineers repeatedly voiced fears over the design of Sir Richard’s SpaceShipTwo and the safety protocols surrounding its testing.


The Telegraph has seen emails and other documents in the public domain — dating back several years, and as recently as last year — in which the engineers warned of the dangers of Virgin Galactic’s rocket engine system.

I should note that a lot of this seems to be anti-VG briefing from the International Association for the Advancement of Space Safety (IAASS).

Skyblazer said:
I don't think there was any "wild speculating" on anybody's part so far.
Click to expand...

Knights arrow has a writeup on the 2007 Scaled Composites/Virgin accident that killed 3 people.

Does anybody know how the the crew escape system works?
Do the test pilots have ejection seats?

"... SpaceShipTwo does not have ejection seats but is equipped with an escape hatch."

VTOLicious said:
Does anybody know how the the crew escape system works?
Click to expand...

Reportedly the vehicle simply fell apart around them.

It is astonishing that one of the crew managed to survive an event like this.

I am curious if any design changes to the escape hatch, crew survival system, etc. will be designed into VVS Voyager, VG's second Spaceship Two, which is about 60% complete. Early space shuttle Columbia flights had two ejection seats added for the programs first five flights, which were considered engineering test flights of the Orbiters. I wonder if the additional cost and performance losses would justify the implementation of such a system on Spaceship Two, at least until the vehicle is ready for 'operational' flights. Has there been any previous variations on the VG spacecraft designs that have an escape system?

Another of Brown's AP photos via Gizmodo: 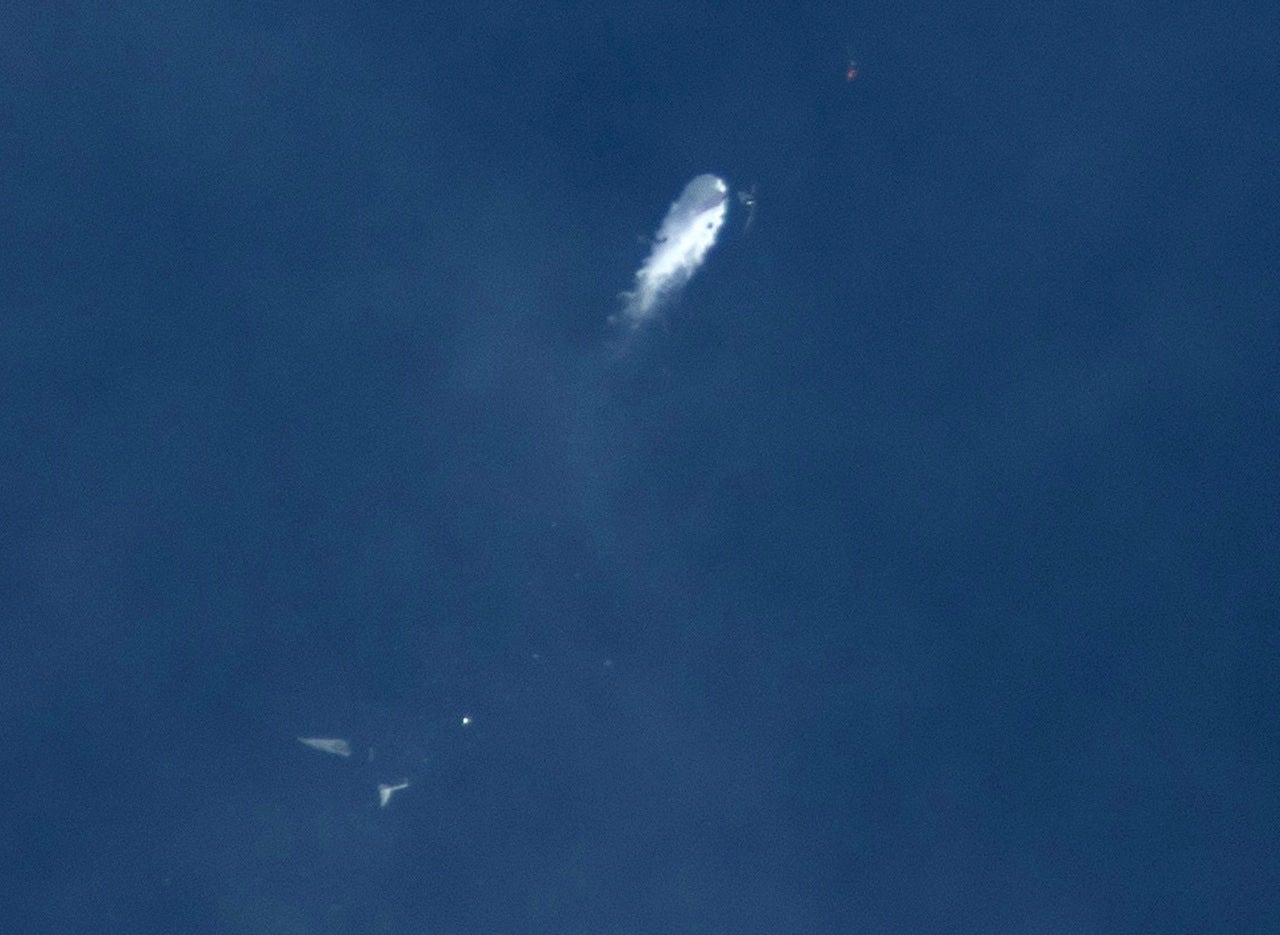 From the looks of the debris and the intact nitrous oxidizer tank (what appears to be its composite tank in the wreckage), I would point to structural failure of the cabin/fuselage. The way it disintegrated and the lack of a sustained burn (if a burn through) of the solid motor (which would not typically just explode). Only time will tell as more information is made available.
A

From what I can see - it almost looks like the feather mechanism engaged while the rocket boost phase was happening - could this even be possible?


I'm sure Siebold will have a tale to tell once he recovers.
D

aliensporebomb said:
I'm sure Siebold will have a tale to tell once he recovers.
Click to expand...

Not necessarily - from his perspective, it may all have happened so quickly that he may even know less than outside observers.
D

Grey Havoc said:
Another of Brown's AP photos via Gizmodo:
Click to expand...

Looks like a cloud of suddenly-released nitrous oxide. If the tank was breached, there would have been a massive kick and a massive release of the oxidizer, which would form a cloud of mist like this.

A couple of photos showing the N2O tank. Both front and back are at least partially visible; it doesn't look like the tank burst. However, the injector plate/valve assembly is not visible. If the motor itself blew apart, the sudden pressure drop would have allowed the tank to expel the N2O almost instantly.

aliensporebomb said:
I'm sure Siebold will have a tale to tell once he recovers.
Click to expand...

Not necessarily - from his perspective, it may all have happened so quickly that he may even know less than outside observers.
Click to expand...

I suppose so - considering how fast it all occurred he might have just found himself outside the aircraft and not really knowing why. Or maybe he exited the craft at just the right time knowing something was wrong - it was so soon after dropping off the carrier aircraft it may just have been a blur.

There are a couple of news stories now reporting that the initial analysis is leaning toward some sort of structural failure due to unexpected aerodynamic loads, not an engine explosion (though there are some ways an engine problem could cause the structural problems).

aliensporebomb said:
From what I can see - it almost looks like the feather mechanism engaged while the rocket boost phase was happening - could this even be possible?


I'm sure Siebold will have a tale to tell once he recovers.
Click to expand...

Associated Press is reporting that this did happen
http://hosted.ap.org/dynamic/stories/U/US_SPACE_TOURISM?SITE=AP&SECTION=HOME&TEMPLATE=DEFAULT&CTIME=2014-11-03-01-25-08

Though there are some seriously incorrect parts of the article.

Can someone confirm my understanding of the process here? As I understand it the wings are meant to move into their feathered high-drag position at high speed (>mach 1.4) but only at high altitude, where the initial impact of the configuration change isn't that severe. There are two steps in this process -- unlocking the wing and then commanding them into the feathered position.

Below is the part I've seen somewhere but can't confirm.

Do they routinely unlock the wing (but not command it to the feathered position) before going up to high altitude? I've heard that this is done to test that the wing can in fact unlock. If it will not unlock, they would abort the flight and descend before they have built up so much speed and altitude that they need the feathered mode to decelerate safely.

This sounds plausible, but if it were true, I'm surprised the NTSB would not mention this in their initial statement of fact.

Edit: So I've finally been able to view the full NTSB Third Press Conference. Acting Chairman Hart states that the Lock/Unlock lever was not supposed to be moved at all after release until after the apogee. Sounds like the suggestion that they test the lock-unlock function after release is inaccurate (or at least, they're not supposed to test it -- whether the pilots decided to do so on their own initiative is clearly going to be a question for the investigators).

Edit 2: And now I've read some of the Nasa Spaceflight Forum discussion and it appears that based on transcripts of previous flights the unlock command has been given fairly early in powered flight on previous tests. So maybe NTSB didn't know that for some reason. Enough. We'll see what they say in today's press conference.
T

NPR reported not long ago that the copilot unlocked the feather mechanism. I may have heard this to be seen on cabin video, I'm not sure.

The NPR story on this was not wonderful. There are two separate actions that are supposed to happen to feather the wings. First, the Lock/Unlock lever goes to "unlock." Then the Feather lever goes to "feather." Cabin video only shows the unlock lever being moved. That alone should not cause the wings to feather. The actual movement of the wings was uncommanded, per the NTSB statement.

I think the papers have got it a little wrong. The scheduled event at M=1.4 was arming the feathering wing, not deploying it. A second step, involving a second control lever, should have been required to deploy the feathering, and this would have been done at low speeds, at the top of the parabolic flight path. The problem in this case seems to be the feathering occurred immediately after the arming, without further crew input. Just speculating, but could be misrigging or miswiring of the control system. Just another speculation: the timing of the unlocking/arming could have been based on crew work load, rather than a particular speed.

Is there any documentation anywhere on the feathering actuators? Considering that the event took place in the transonic region, could it be possible that flutter either caused a mechanical failure with the actuator linkage or (if it uses some other direct-drive method), overridden hydraulic, etc pressure resisting movement?
A

Wow. This is one time that one of my guesses ended up right and I really didn't want it to be. Sigh.

If it was pilot error why not?

Sounds reasonable. That gives them a full year to do the investigation and implement whatever mechanical fixes and procedural changes might be needed.