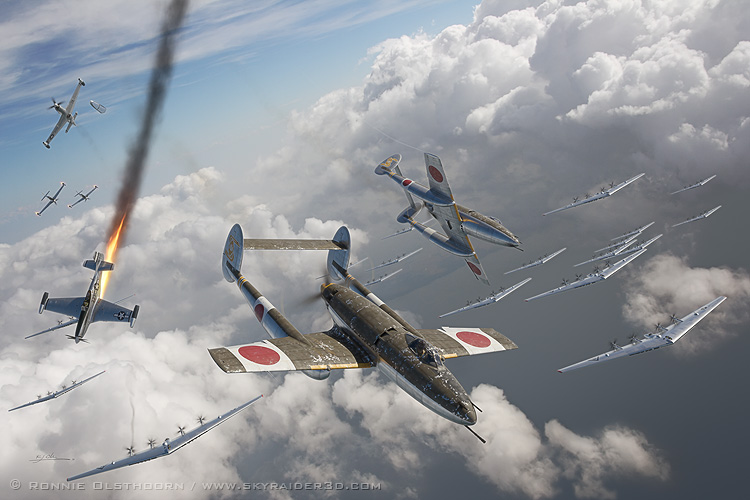 In-between two family expansions (the second one less than a fortnight ago!) and non-aviation-related work, I managed to get some aviation art done. Here is the first of over a dozen of images, both 3D scenes and 2D profile art, which I created for Ian Allan's upcoming book about Japanese x-planes in the popular Midland Publishing Secret Projects series. I was lucky enough to be commissioned the front cover illustration, which is the image shown here. It is the first aviation art image I've made using Mental Ray.

I've dubbed the image "Slice & Dice". The scene is entirely speculative and shows a what-if "1946" scenario high over Japan. Having slashed their way through the ramjet-equipped P-51D Mustang escorts, a pair of Japanese Manshu Ki-98 fighters is diving on a formation of B-35 flying wing bombers. At the time of Japanese surrender in August 1945, all three aircraft were very much in prototype status and none would ever become operational. The Ki-98 was never finished and, though extensively test-flown, neither the B-35 nor the ramjet-equipped Mustang were found suitable for operational service.


Here is what the image looks like on the book cover: 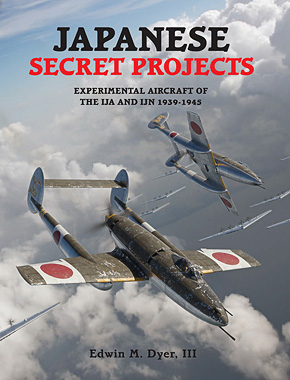 More information about the book can be found here: http://www.ianallanpublishing.com/product.php?productid=67375&cat=1057&page=1

Once the book is released (planned for October this year), prints and t-shirts will become available on my new webshop at http://www.digitalaviationart.com and I will post more of the other artwork I created for the book. 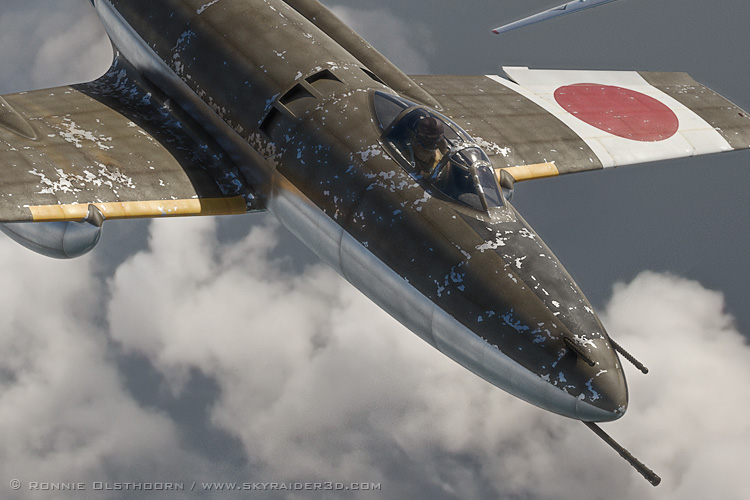 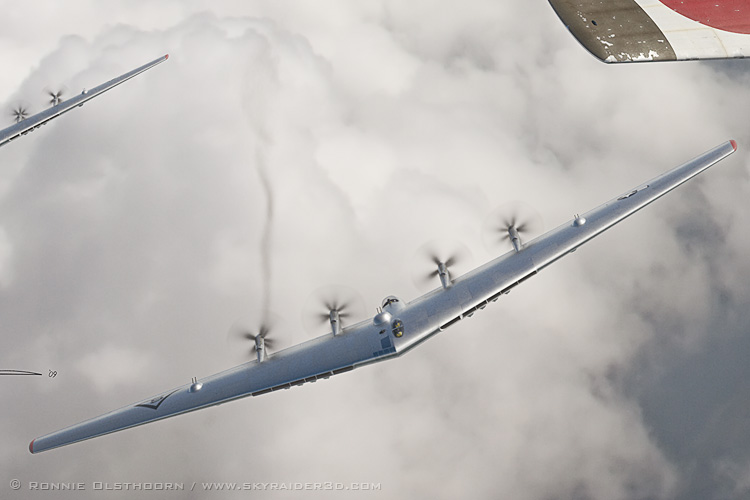 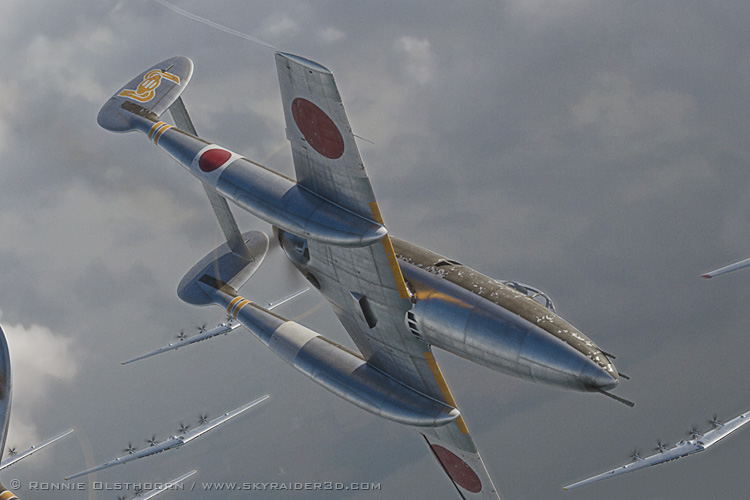 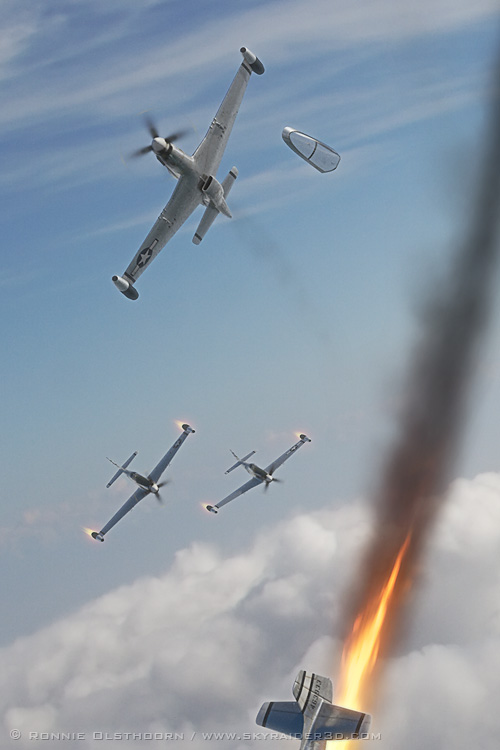 And finally a size comparison profile of the Ki-98 with the P-51D Mustang. I couldn't quite fit the B-35 in there at the same scale! 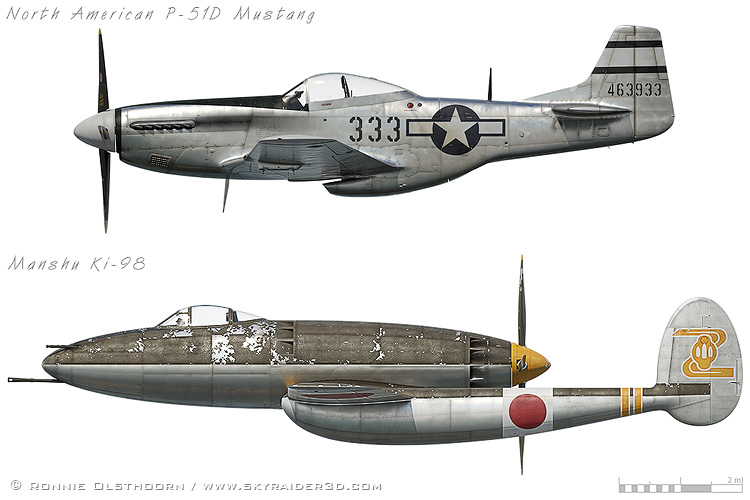 
PS. Thanks Ed for getting me on board this fantastic project. I thoroughly enjoyed working on it.

Lovely work, especially the choice of aircraft and the scene, really wonderful. Thanks for sharing, Ronnie.

wow nicely done. Do let me know if you want any paper models done of these craft. are there simple or detailed 3 views in your book?

I've often wondered, did the Japanese use particularly thin camouflage paint on their aircraft?

As for the paint, IIRC, in some cases, a base primer wasn't added to the paint or used before the camo paint was applied which resulted in the paint being more easily worn down and rubbed away. While the paint was certainly reapplied when possible, in the field, I suspect ground crew had far more important tasks to deal with than worrying about paint.


rickshaw said:
I've often wondered, did the Japanese use particularly thin camouflage paint on their aircraft?
Click to expand...

that powerplants on the P-51 are ramjets?. This particular P-51 existed or it is only for artistic purpose?

Many thanks for the comments! Glad you like it!


Paperforce, drop me an e-mail and I'll send you the (excellent) drawings I used. They come from Matsuba Minoru's Design with Precision, nr.4. Sadly out of print now.


Rick, indeed it was a combination of lack of primer, poor application techniques, heavy use, lower maintenance priority and low paint stocks, a far as I remember. But even early in the war some Japanese types were seen with much of their paint worn off.
D

Damn, that pic is awesome.

Would Japan have been able to manufacture this aircraft if Japan had not accepted unconditional surrender after the bombing of Nagasaki and had chosen to continue fighting? Does anyone believe that the Northrop YB-35 would have been manufactured if the allies had commenced with Operation Downfall begining with Operation Olympic, the invasion of Kyūshū in November 1945?

I think the answer to both questions is "No".

Japan's industrial capabilities had been seriously damaged so they lacked the resources to produce a state of the art fighter in useful numbers.

The XB-35 proved to be an inefective aircraft.

So that beautiful art is just that.

Thanks for the additional replies!

pometablava said:
I think the answer to both questions is "No".
Click to expand...

I agree, but it all is part of the "what if" scenario. What if Japan was in a position to produce this fighter? What if the B-35 had flown in 1943 and did prove to be an effective aircraft? Triton, remember that "what if" doesn't necessarily start in the summer of 1945. What if the allies had lost Midway and were beaten on the Normandy beaches, Stalingrad, Battle of Britain...? You'd be looking at a whole different "1945" then!
The way I generally interpret what-ifs is to allow anything but dependencies on events that happened after the capitulation. You would never see me make the mistake of having swept-wing F-86s flying over wartime Germany, simply because Alexander Lippish played a part in its development. The F-86 would've had straight wings if the war had lasted until 1946. Of course you could say "what if Alexander Lippisch was captured", but then things get really silly! Likewise I don't accept a Yak-15 as a what-if 1946 aircraft, as it used a German engine (again, a captured engine could've been used, etc, etc...). It's up to the artist, and the audience, to draw a line somewhere. In the end it's all fantasy as there are no what-ifs, but it's fun to speculate and the results can be surprising and intruiging - or at least entertaining. And it's just that, which attracts us to this board, isn't it?


Glad you like it Peter. I bet you're as eagerly awaiting the release of this book as I am!

Great picture! And good points about how a point of divergence to create the alternate history scenario can (and usually would) happen many years before the scenario.

The centre turrets of the B-35 had quad .50 machinegun arrangements. Though I guess being alternate history and all this could be a twin 37mm turret that USAAC was working on for armament of the B-36...

PS. I also wasn't sure about the crew positions in the large clear bulb in the tail: 1 or 2?

Skyraider3D said:
I also wasn't sure about the crew positions in the large clear bulb in the tail: 1 or 2?
Click to expand...

From memory the B-35 was to have three gunnery control positions. One behind the pilot in the forward bulb and one in the aft bulb both with periscope mounts with top and bottom apertures. The third position was a retractable control station at the bottom of the aircraft like the Sperry ball turret but without the machineguns. I think there was a second seat in the aft bulb for an observer/controller.

I'm afraid I can't do better at the moment as I'm moving my office this week and my copy of Northrop Flying Wings is in a box.

Anyway the picture is the best I've ever seen of B-35s so no-one should be complaining!

Abraham Gubler said:
I think there was a second seat in the aft bulb for an observer/controller.
Click to expand...

Yes I suspected as much, as it's pretty large for a single person.

Thanks for the info and compliments!

As beautiful as ever

pometablava: There's kind of an odd connection here. Those 20" diameter ramjets were developed by Marquardt Aircraft of Venice, California. According to Wikipedia, Roy Marquardt had previously worked at Northrop doing engine-cooling work for the B-35 project.

Didn't Bill Yenne do a painting of B-35's in action over Japan? I vaguely remember seeing that somewhere in a book once.


Interesting info, Apophenia. There's a whole host of 1946 possibilities, including my favourite bird of all time: the Skyraider!


XP67_Moonbat, I don't really recall seeing much artwork of the B-35s apart from some 3D images, although I am sure there must be some paintings around. Not a clue about the artwork you mentioned tho'.

Abraham Gubler said:
I think there was a second seat in the aft bulb for an observer/controller.
Click to expand...

Yes I suspected as much, as it's pretty large for a single person.
Click to expand...

Turns out the aft canopy was only for a single air gunner (see attached picture) and the B-35A was to have three control stations: forward top, aft rear and aft double sided (top and bottom). Also the original B-35 mockup shows the upper turret with two 37mm guns! While there were a range of differences between the mockup and the built aircraft (especially the radiator intakes) it is remotely plausible (pun intended) that the central turrets of the B-35 could have emerged with twin 37mm rather than quad 12.7mm.