Russian robot to visit the ISS

Today, July 23, 2019, an anthropomorphic Skybot F-850 robot was delivered to the Baikonur cosmodrome for pre-flight preparation. It will be delivered to the International Space Station by the Soyuz MS-14 unmanned spacecraft, which is scheduled to launch in August 2019.

The humanoid robot Skybot F-850 was created by Android Technique and the Advanced Research Foundation for the Ministry of Emergency Situations. After docking the Soyuz with the ISS, it will be transferred from the ship to the Russian segment of the station, where, under the control of the cosmonaut of Roscosmos Alexander Skvortsov, he will perform several tasks. In total, it will stay in orbit for 1.5 weeks, then return to Earth in early September.

Launch of the Soyuz MS-14 spacecraft is scheduled for August 22. It will pass in an unmanned mode and will become a test for the Soyuz-2.1a launch vehicle, since before that it had put cargo ships and various spacecraft into orbit. Soyuz-2 of stage 1a replaces the carrier rocket Soyuz-FG, which since 2002 has been delivering international crews to orbit.

Originally it was a combat robot:

One thing that puzzles me about sending robots on the ISS, will there be anyway that they can bring them back down to Earth before the station burns up when the ISS is due to de-orbit? or will they end up being left on the station?
F

FighterJock said:
One thing that puzzles me about sending robots on the ISS, will there be anyway that they can bring them back down to Earth before the station burns up when the ISS is due to de-orbit? or will they end up being left on the station?
Click to expand...

This one is only staying a week & half. I am not sure the US robot is currently on station either.
F 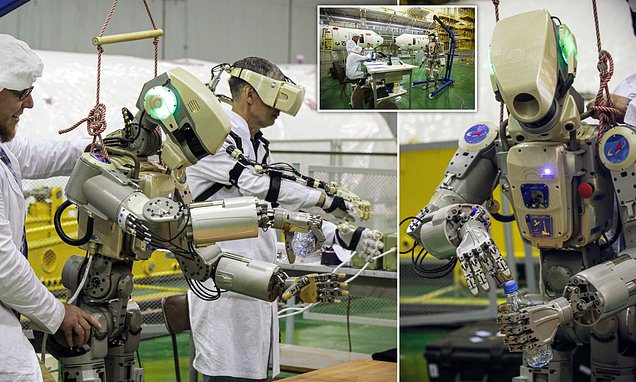 icknamed Fedor, the anthropomorphous machine - which is remarkably agile - was seen undergoing a battery of stress-tests at the Baikonur Cosmodrome in Kazakhstan, last month.

Someone got a lot of money to spend because I don't see how humanoid shape, being more heavy than anything else, can be of any help in free-floating space (what's the need for legs and then torso? ).

TomcatViP said:
what's the need for legs and then torso?
Click to expand...

Since every equipment on board the ISS (and everwhere else) is designed for being operated by humans, a humanoid form is the best way to being truely polyvalent.
Any other shape can be more efficient at certain tasks and in certain environments, yes. But it'll be limited to those.
So "investing" in those apparently useless appendages is really yielding a leapfrog to the next level.
F

Russia has launched it's robot to the ISS. It is due to arrive on Saturday.

Does anyone know where you can buy patches like the one for this mission that I posted above?
M

Sounds like the beginning of the plot line for a B movie sci-fi action thriller .
Last edited: Aug 23, 2019
F

Successful relocation! At 11:59pm ET, the Soyuz MS-13 spacecraft was docked to the Poisk module of the @Space_Station. This move frees the port for an unscrewed Soyuz MS-14 spacecraft to execute a second docking attempt Monday night. Get more details: https://go.nasa.gov/2L8T2Gv
Click to expand...

The Soyuz MS-14 is home at the Zvezda module! Contact and capture confirmed at 11:08 pm ET. http://nasa.gov/live
Click to expand...

Some details on an upgrades flying on this Soyuz:

The descent vehicle of the Soyuz MS-14 spacecraft with the anthropomorphic robot Skybot F-850 September 7, 2019 at 00:32 Moscow time, made a successful landing. All orbiting and landing operations were completed as normal.

In the Soyuz MS-14 spacecraft, the control system for movement and navigation in terms of controlled descent has been finalized. The analog descent control system is completely replaced by a digital one based on the BIUS device (angular velocity integration unit) developed at the Energia rocket and space corporation named after S.P. Koroleva (part of the Roscosmos State Corporation).

The ship was part of the International Space Station on August 27, 2019. He delivered equipment for scientific experiments, medical supplies, containers with diets, packages for the crew, as well as the anthropomorphic robot Skybot F-850. Roscosmos cosmonauts for several days tested the robot system in space flight.