Retired U.S. general on how to handle IS and why we lost in Iraq, Afghanistan

"Retired U.S. general on how to handle IS and why we lost in Iraq, Afghanistan"
By Michael Walsh 13 hours ago


A three-star general in Iraq and Afghanistan knows firsthand what went wrong during the last decade — and does not want the U.S. to repeat the same mistakes in our battle against the Islamic State.

Lt. Gen. Daniel Bolger, of Raleigh, N.C., retired from the Army last year with the Combat Action Badge, five Bronze Star medals (including one for valor) and a sense of guilt for the soldiers who died under his command.

“I am personally responsible for the deaths of 80 of them — 76 men, four women — and indirectly responsible for a lot more as a senior leader,” he said in an interview with Yahoo News. “I will carry these deaths with me to my grave. I think about it every day and night.”

Bolger, the author of "Why We Lost," salutes the troops for their bravery and sacrifice but places the blame squarely on people in the higher ranks, like himself.

“The men and women I fought beside did a great job, but I know I let them down by not giving them rational missions that they could carry out,” he said.

Having studied military history, he says he should have known that a U.S.-led counterinsurgency in a country like Afghanistan could never work.

Now, with the rise of the Islamic State, there’s a growing choir urging the U.S. military to lead yet another ground war in Iraq.

“That would be four times biting that poison apple: Vietnam, Afghanistan, Iraq and then Iraq again,” he said.

Bolger says the Iraqis and Syrians need to lead the charge against the brutes who have been spreading chaos and bloodshed through their countries.

“We have to let the Iraqis do it, realize they are not going to do it our way and understand that we will have an imperfect outcome,” he said.

Bolger says the U.S. should still be involved in the region’s struggles — in part because of our moral commitment to the Iraqi people — but it’s a matter of degree.
View gallery
Bolger
Lt. Gen. Daniel Bolger, of Raleigh, N.C., is the author of 'Why We Lost: A General's Inside Account …

In September, President Barack Obama ordered America’s armed forces to begin a series of airstrikes against IS targets in Iraq and Syria and assured the public that “these terrorists can't find safe haven anywhere.”

Bolger notes that it is difficult to bomb IS because it doesn’t exactly have a panzer division. And its members flee into civilian areas when the West applies pressure.

The men and women of the U.S. military are trained to do many things in combat effectively, but sorting out who is or is not a terrorist in civilian areas is not one of them, according to Bolger.

To Bolger, IS is just the latest version of the same Sunni jihadis he had been fighting. In some cases, they are literally the same people.

On Veterans Day, Defense Secretary Chuck Hagel gave a speech at the Vietnam War Memorial urging Americans to honor those who served but to question the policies that send them off to fight.

“There is nothing to be gained by glossing over the darker portions of a war that bitterly divided America,” Hagel said that day. “We must openly acknowledge past mistakes, and learn from them, because that is how we avoid repeating them.” 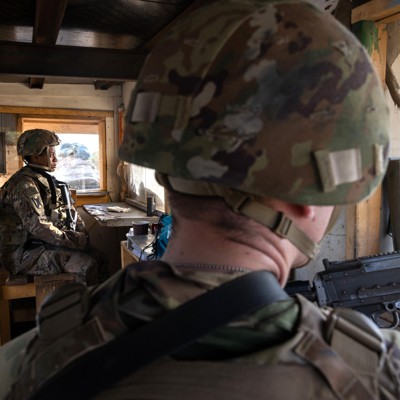 US Will End Combat Mission In Iraq, Biden Says

US needs to 'divert more of our body on threats in China and Russia,' says Joint Chiefs Vice Chairman Gen. Hyten

The Islamic State militant group is staging increasingly bold attacks on both security forces and civilians in northern Iraq, with energy infrastructure also at risk.