He say to launch Orion from open Sea, instat of Nevada Fields
as launch option is this much "cleaner" as desert
gona like Aldebaran, more like Seadragon or of a big Platform ?

also he say that the USAF Orion are in reality fake

to George Dyson remark of gigant H-bomb on Doomsday Orion is possibly
with Teller–Ulam design you can build real big Bomb
like 50 megaton Tsar prototype Bomb.(100 MT final Version)
with 1500 ton (3,306,934 lbs) of Payload, as H-bomb that ultimate Doomsday weapon

they really went to Coca-cola to find a way to Store and deliver tausend Atombombs to injector ?

Michel Van said:
He say to launch Orion from open Sea, instat of Nevada Fields
as launch option is this much "cleaner" as desert
gona like Aldebaran, more like Seadragon or of a big Platform ?
Click to expand...

It woudl be off of a platform of some kind. Orion, unlike Sea Dragon, was extremely dense. It'd sink.


also he say that the USAF Orion are in reality fake
Click to expand...

Errr... no. A great deal of Orion work was doen for the USAF. The Orioneers *actual* *goal* was ships of exploration, but they had to go to the military for funding, and thus did design work for the USAF.


they really went to Coca-cola to find a way to Store and deliver tausend Atombombs to injector ?
Click to expand...

Yes. The early Orion pulse unit storage and track system was rather clumsy. The final design was really quite elegant. It wasn't exactly a straight scaleup of a Coke machione, but they did learn useful things from the Coke people.

Orionblamblam said:
It would be off of a platform of some kind. Orion, unlike Sea Dragon, was extremely dense. It'd sink.
Click to expand...

even Orion swim like Sea Dragon, there is another problem
the waterpressure would compress the shockabsorber bags!

had Cole ever a Idea how Aldebaran had to Take off from the Sea ?

Michel Van said:
the waterpressure would compress the shockabsorber bags!
Click to expand...

Not really a problem, in that the shock absorbers would see a hell of a lot more pressure from the atom bombs than from being a little ways under water. A bigger issue would be the setting off of a nuke under water. No, the Orion would never be under water, always above it. The platform would hold it well above water, by quite a distance (at least the distance of the proper separation between the ship and the bomb, so that the first bomb would also be above water).

had Cole ever a Idea how Aldebaran had to Take off from the Sea ?
Click to expand...

Doubtful. Aldebaran was far more a work of *art* than of *engineering.*
J

When reading about the Orion project the first impression is: “that thing cannot work without killing the crew”. Reading further the feeling is “errarum humanum est, et perseverare diavolicum”. Watching the drawings it reaches to the “what if?”.

After all, our engineers can build sturdy structures and shock absorbers of any size. Our scientists have also advanced a lot in the technique of magnetic confinement that may serve to tame the bomb.

The Orion designs are very sophisticated and are far from the idea of a guy who puts a cover over a nuke, sits on it and push the button!

Someone with an open mind would consider ALL the options. Nature does it and we cannot hope for eternal luck with the Eros asteroids or the comets in random orbit of the type that almost annihilated us 8000 years ago.

I believe that if the most extreme ecologists could live the environmental consequences of a KT impact, they would consider the nuclear option as a life option.

construction of platform for Orion sealaunch is easy

like Troll A platform (Norwegian platform for production of gas)
Troll A has an overall height of 472 meters and weighs 656,000 tons
The platform is built of reinforced concrete using the Condeep technology.
http://en.wikipedia.org/wiki/Condeep

the question is Wat is left over after liftoff ?

to Comet busting
George Dyson say in TV doku some thing like that:

if a Comet is to hit earth and we have some month
only way to stop is to build a Orion ship and intercept it
Click to expand...

Michel Van said:
had Cole ever a Idea how Aldebaran had to Take off from the Sea ?
Click to expand...

The only solution is to vaporize sea water as ejection mass for the nozzle.
After reaching certain speed, it will get free from the water suction and change to hot air as ejection mass.
Afterwards, it must fly from some minutes by ground effect until reaching the required speed for the real take off.
This will be achieved by increasing the nuclear reactor temperature to disociate the air admitted by the air intakes and convert it into ionized plasma to eject it by the nozzle and obtain orbital speed.

Michel Van said:
the question is Wat is left over after liftoff ?
Click to expand...

Quite a lot. Build the launch platform *stout,* and then slather it over with something like asphalt. Get a few thousand-gallon-per-second seawater pumps going to hose the thing down with just prior to and during launch, and your platform should be in pretty good shape. You'll need to slather on some more asphalt after each launch, but it might be only a fraction of an inch.


if a Comet is to hit earth and we have some month
only way to stop is to build a Orion ship and intercept it
Click to expand...

Sadly, this is true *only* if you already have an Orion lying around. If we found out that the Earth is going to get whacked in a month, there's no chance that even the preliminary design could be completed in time. If we know that we're going to get hit in 2036, on the other hand, Orion would eb a great way to deal with it.

so here my version of Orion Sea Launch Platfrom

the Blast Pit is close at on end ! idea behind this:

the walls are strong enough support the blast.
before liftoff few thousand-gallon-per-second seawater runs wall down.
the shockwave of first detonation focus downwards reflects at bottom
and give additional trust to pusherplate (including the water vapor.)

so can they use a smaller nuke for the first blast.

or is this a "Flash in Pan" Idea again ?

to cover the platform with asphalt there is alternative

for ROMBUS Booster need a special launch pad.
a reinforced concrete dish that filled with water before launch 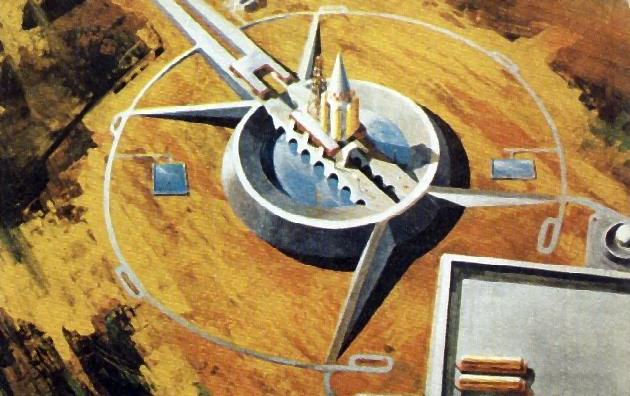 this protect the Launch pad of force of Liftoff Thrust of 17,932,784 lbf (8134 ton)
some thing similar proposed for Boeing SPS SSTO with a artificial lake

Glad you enjoyed it, Michel - it's a shame they never think to release quality programmes like that on DVD, I'd buy it! BTW, I now have a better recording in 16:9 aspect ratio, so I shall upload that as well in the next few days. Just keep an eye on that page.

Based on experience with the subscale flight models and ideas regarding silo-launched nuclear retaliatory Orions, what *might* have been done with a floating ocean-based platform is that the orion would be kept within a silo and launched like a sea launched ballisting missile. Basically, shot into the air via compressed gas (generated by tanks of pressurized nitrogen, say, or vaporized liquid nitrogen, or possibly something like gunpowder), and the first nuke is fired only after forward motion is attained and the silo is cleared.

One discovery of the flight models was that Orion may not work very well at zero velocity within an atmosphere.

Since the pusher plate was of slightly larger diameter than the rest of the vehicle, and you wouldn't want to scrape the plate or the vehicle along the walls of the silo, the Orion could well have had a sacrificial sabot somewhat like the MX. Big chunks of foam, I'd imagine. They'd get blasted to flinders by the nuke, but who cares?

that Put-Put work i know, but is better or worst as chemical Rocket engine ?
in poit of view 1891 ...

that Put-Put work i know, but is better or worst as chemical Rocket engine ?
in poit of view 1891 ...
Click to expand...

Worse. Chemical "Orions" have specific impulses *far* below regular rockets. Ganswindt's design was even worse, as it used a chemical explosive to fire a block of iron *forwards* to bang into the bell and rebound. He'd ahve been much better off just having a cannon pointing aft, shooting blanks.

"the Atomic Gun" by Conastintin Paul van Lent in 1955

on the bottom of chamber is 15,24 meter (50 feet) high tower with a Atombomb
and the chamber is filled with powdered steel and aluminum.
(this is "charge" for the Atomic Gun)
the Top of Chamber (and bottom of shaft) is plugged by thick cylinder of concrete
on top of that the payload (in this case a Space Sation build out concrete)

van Lent want to use to 2 Atombombs, on in Chamber and second on top of mountain
"To produce momentary vaccum through which his rocket can pass"

i think Jules Verne is turning in his grave

Michel Van said:
on the bottom of chamber is 15,24 meter (50 feet) high tower with a Atombomb
and the chamber is filled with powdered steel and aluminum.
Click to expand...

The idea has merit... except for the powdered metals bit. That's silly. You'd do far better filling the chamber with either liquidifed or high-pressure gas. Hydrogen would be best.

Well there is the story of the steel lid put on a secondary tunnel in a subterranean nuclear test in Nevada and shot beyond the escape velocity by the explosion. A legend ?

Skybolt said:
Well there is the story of the steel lid put on a secondary tunnel in a subterranean nuclear test in Nevada and shot beyond the escape velocity by the explosion. A legend ?
Click to expand...

Yes and no. The "manhole cover" was indeed shot off the mouth of the borehole at extreme velocity, likely exceeding escape velocity. However, it is not thought that it left the atmosphere. Due the gasses compressed behind it, the sudden acceleration, and aerothermal heating from hypersonic speeds at low altitude, the plate certainly experienced substantial surface ablation (melting and vaporization of the steel), and likely also got close to or higher than the melting point. So it might have been a shotgun blast of steel droplets. Regardless, the drag on a flat plate at low altitude and orbital velocity would have been stupendous.

An interesting story about how the theory of Dyson Spheres evolved into it's present form: 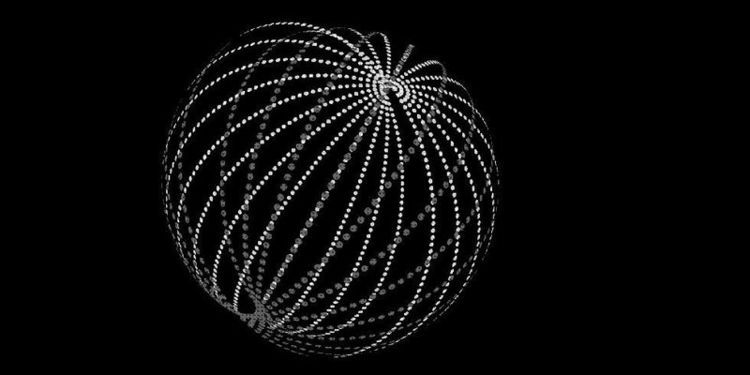 Freeman Dyson's alien-hunting idea has worked its way into the culture.