Is somebody here able to say what are the "new" ballistic missiles from North Korea ?

I often find well worth the time are OsInt specialists par excellence, the "Arms Control Wonk" community, shepherded by Jeffrey Lewis. Here's a new video primer (published Oct 5, 2017) on their most recent work and methodology, courtesy of WSJ.

Interesting viewpoint, though the public bragging about knowing Kim's location at around the 5:40 mark, then the flippant remark that their revelation will get someone killed is sickening (and also possibly aids Kim's future security).
U

starviking said:
Interesting viewpoint, though the public bragging about knowing Kim's location at around the 5:40 mark, then the flippant remark that their revelation will get someone killed is sickening (and also possibly aids Kim's future security).
Click to expand...

I was taken aback by

that part of the conversation as well, but having followed their work for a while my impression is that since their process of discovery is informal, conversational and open source, that tone carries over to presentation as well. Their subject matter is distressing and it might be that when the mechanics of doing anything constructive at all about the situation are both unavoidable and nonetheless potentially dire some form of desensitization or glossing over happens. By this I don't of course seek to excuse or condone any adverse human rights implications and sincerely hope "Arms Control Wonk" will avoid any moral relativism in this regard in the future.

Now, here's a link from another conversation ("Nuclear Weapons NEWS ONLY") that I'd like to expand upon, regarding NK's missile development:

Such close relations as demonstrated

in this Reuters article (via sferrin) between NK and Russia, mutual trust even, should carry proportionate responsibility on the part of Putin's administration/"power vertical" in countering proliferation. Sadly, having become something of a rogue regime themselves, this signaling cannot be taken at face value and is probably a component of attempted reflexive control - in case of NK such contacts (and much less information exchanged) need not be public, after all.

Various factors of norks' recent headway will yet come to light, the interesting provenance of their rocket engines' most recent iteration being but one example. The overall capabilities (range) of their systems seem trained explicitly on the verge of US mainland yet remain somewhat ambiguous - this would be the "goldilocks zone" to goad US with a fig leaf of NK "not being entirely responsible" for bringing the situation to a head should something really untoward happen. Curious, given NK's stated priorities and the dire regime security implications (they really don't have a standalone concept of "national security", do they) of such tactics, wherein a form of regional deterrence would suffice or even be preferrable.

Meanwhile Russia remains remarkably blasé about Kim Jong-un having weaponry potentially putting Russia's land mass at far greater risk than that of the US. I'm sure Putin would like nothing more than the US becoming more bogged down in Korea (and/or Beijing becoming dependent on Moscow's "arbitration"). It remains to be seen whether the Trump administration (and Xi) will oblige and if so, how. Certainly Russia's western, southern and arctic military districts have taken clear precedence in the buildup of Russia's capabilities as demonstrated in the Zapad 2017 exercise and the more regular adjoining October maneuvers including, among other things, the whole of their strategic nuclear forces. Not perhaps incidentally, Kim Jong-un has become more bellicose toward the US pretty much concurrently.

Thus it would, IMHO, be instructive to look beyond the Kim dynasty's bellicosity, "juche" and idiosyncrasies and also view NK's recent actions as those of a client/vassal state and its wider geopolitical ramifications, especially (but not limited) to Russia as a self-serving patron. If all of this goes very much beyond opportunistically aligned interests only, the strategic and tactical implications in forming a rational response and regaining the initiative cannot be understated.
U

More expertise from California, this

time a rare first hand NK source, Siegfried Hecker, interviewed for "World Class with Michael McFaul" podcast (on Soundcloud) at Stanford FSI. Very informative, well worth a listen even if the focus is heavily on NK/US bilateral relations and the evolution of respective technological capabilities.

Not many people can say they've held North Korea's plutonium in their hands, but Siegfried Hecker has toured North Korea's nuclear facilities four times. He was the director of the Los Alamos National Laboratory and has advised several U.S. presidents on nuclear security. Hecker tells us about North Korea's weapons capabilities and whether we're heading toward the world's first nuclear war. He is currently a senior fellow at the Freeman Spogli Institute for International Studies. For more on North Korea from Hecker and our other nuclear scholars, visit Stanford FSI, The North Korea Nuclear Situation.
Click to expand...

Having already linked to contemporary

views from academia and open source enthusiasts, perhaps (at this tangent anyway) it will add something to the topic to hear from professional intelligence as well. As it happens the George Washington university Center for Cyber & Homeland Security has just held a CIA-GW Intelligence Conference, one of the topics being "Countdown to Crisis: Asia Pacific Insecurity and America" published on Oct 6, 2017. The discussion, while understandably tiptoeing almost imperceptibly around some aspects and consciously signaling certain points, is a fairly representative overview of current thinking from Langley.

Panel discussion on "Countdown to Crisis: Asia Pacific Insecurity and America" at the 2017 Ethos and Profession of Intelligence Conference, co-presented by the Central Intelligence Agency and the George Washington University on October 4, 2017. Panelists are Michael Collins, CIA; Ambassador Joseph DeTrani; and Yong Suk Lee, CIA. Moderated by Jim Sciutto, CNN.
Click to expand... 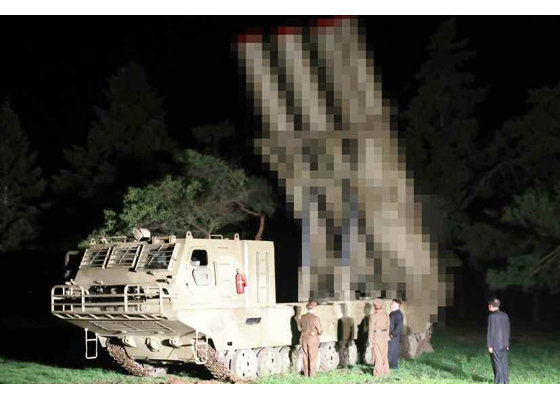