Apparently there is a shipborne capable version of this (or are they going to have to throw together one in a hurry if this goes through?):

The plan, still subject to final approval, would involve destroying the weapons, likely aboard the MV Cape Ray in the Mediterranean Sea, with U.S. Navy warships patrolling nearby.

This approach would avoid the vexing diplomatic, environmental and security problems posed by disposing of the materials on any nation’s soil.

The Obama administration has used international oceans in other sensitive cases where land-based options were precluded. The U.S. Navy buried al-Qaida leader Osama bin Laden at sea to avoid his tomb becoming an attraction for extremists. The government has been questioning terror suspects for as long as it takes aboard navy ships since the CIA closed its secret prisons overseas and President Barack Obama has refused to send more prisoners to the detention center at the U.S. base at Guantanamo Bay, Cuba.

The decision to proceed with the chemical disposal plan would be made by the Organization for the Prohibition of Chemical Weapons, a global chemical weapons watchdog agency with 190 member states.

In a statement Wednesday in the Netherlands, the watchdog agency said the effort to ship Syria’s chemical arsenal out of the country “continues to pose challenges due to the security situation on the ground.”

No country has committed to disposing of the chemical weapons on its own soil, which is why the U.S. offer to destroy the deadliest of the chemical components at sea is seen as a likely option.

The U.S. officials who disclosed aspects of the U.S. portion of the plan spoke on condition of anonymity because they were not authorized to talk about it by name.

Jonathan Lalley, a spokesman for the president’s National Security Council, stressed that no decisions had been made regarding destroying chemicals outside of Syria.

“We and our international partners are pursuing alternative means of destruction, and we will continue discussing with other countries how they might best contribute to that effort,” Lalley said in a statement. “We remain confident that we will complete elimination of the program within the milestones agreed upon.”

The MV Cape Ray would host the destruction of some of the deadliest of Syria’s chemical materials, using a process developed by the Pentagon but never employed in an actual operation.

The U.S. would use what it calls a mobile Field Deployable Hydrolysis System to neutralize the chemical material, making it unusable as weapons. The system was developed by the Defense Threat Reduction Agency, which is an arm of the Pentagon. The titanium reactor uses heated water and other chemicals to make the chemical warfare material inert.

According to several U.S. officials, two of the hydrolysis units would be mounted on the Cape Ray. It will take some time to retrofit the ship and conduct training to insure that the process can be done successfully at sea.

Once the mission is finalized and the Cape Ray is ready, it would be transferred to control of the Defense Department’s Military Sealift Command. The ship is owned by the Transportation Department’s Maritime Administration and it would have a civilian crew.

U.S. officials said they expect to use U.S. Navy ships to provide an escort and security for the operation. There are already a number of navy warships in the Mediterranean.

As of Wednesday, U.S. officials said they are still trying to determine how the chemical warfare materials would be moved from Syria to the U.S. ship. They said they expect that another country will provide a ship for that part of the task.

Officials said they expect a final decision soon and the operation would begin by the end of the year.

The system as built comes in a series of 20-foot ISO containers. Bolting that stuff onto a ship isn't a huge stretch. The containment shelter for the processor proper is probably the biggest fabrication issue -- I doubt the original model was designed to deal with wind and weather conditions at sea.

True, but salt air can be a real problem overall. Looks like they're going to go with the option, nonetheless. 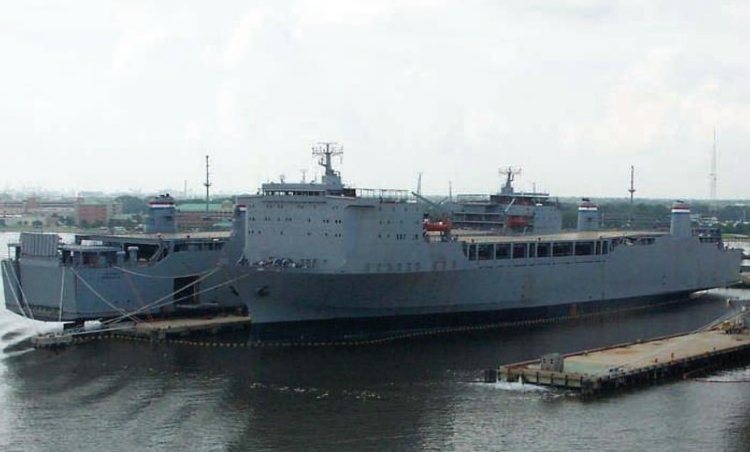 Oh, absolutely. I expect they'll put most of the containers below deck to keep off the worst of the salt, but the reactors and reagent vessels probably have to live up on deck for ventilation purposes, so they'll need extra attention.
It's a fairly clever solution, assuming it works.

On a related note: http://news.yahoo.com/photos/danish-led-task-force-gathers-for-syria-chemical-weapons-pickup-slideshow/

This could get interesting, and not in a good way.

Almost half of Syria's declared stockpile of chemical weapons has now been removed, the Organisation for the Prohibition of Chemical Weapons says.

Two additional consignments of the most dangerous chemicals were loaded on to cargo vessels at Latakia over the past week, according to an OPCW statement.

A total of 10 consignments have been shipped, including all of Syria's sulphur mustard, a blister agent.

The OPCW aims to destroy or remove the country's entire arsenal by 30 June.

The Syrian government approved the initiative last year after a chemical weapons attack outside Damascus left hundreds of people dead.

The OPCW said the two most recent consignments were delivered to Nordic cargo vessels docked at the Mediterranean port of Latakia on 14 and 17 March. They included both "Priority 1" chemicals and less hazardous "Priority 2" chemicals.

The 10 consignments represent 45.6% of all the chemicals that must be removed from Syria for destruction, including 29.5% of Priority 1 chemicals and 82.6% of Priority 2 chemicals.

The OPCW said all stocks of sulphur mustard had now been removed.

Sulphur mustard is a "unitary" agent that is stored in a form that can be deployed immediately. In contrast, Syria's nerve agent sarin is thought to be stored in a "binary" manner, meaning it is kept as two distinct chemical precursors that are combined just before use.

Although the OPCW-UN Joint Mission said earlier this month that "good progress" is being made in the removal of the chemical stockpile even though the Syrian government has missed a series of deadlines.

The removal of Priority 1 chemicals was initially due by 31 December, while the deadline for the shipment of Priority 2 material was 5 February.

The Syrian government, which says the shipments have been delayed by security and logistical issues, has presented a revised schedule that aims to have them completed by 27 April.
Click to expand...