Ki-62 fighter was a light fighter plane equipped with an air-cooled engine of which it conceived by the line of investigation which the Japanese army formulated in 1940.
However, the Nakajima airplane which is an order maker of ki-62 fighter was pressed with experimental model modification of the ki-43, and it was difficult to design a new light single seat fighter.
The Hayabusa type2 which was a performance gain type of the ki-43 was interpreted as the ki-62 after all, and the trial production of the ki-62 was stopped.

From what I was led to believe from other sources, the Nakajima Ki-62 was a rival to the Ki-61 Hien, and like that machine, it used a liquid-cooled engine, not an air-cooled one initially. However later development saw the adoption of the Ki-63 designation which was to indicate the change in powerplant to the Mitsubishi Ha-102 radial engine developing 1,051 hp (784 kW). Here's the GA drawing prepared by this site's own Justo Miranda. 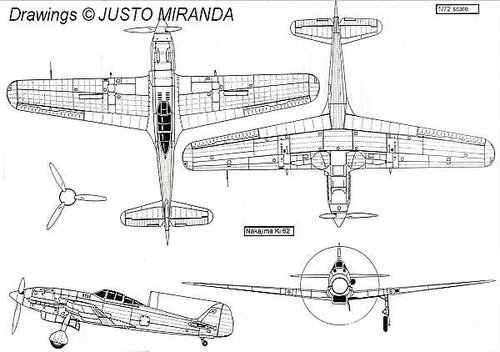 ​
When Italian and Japanese designers could make use of the Daimler Benz in-line engines made in Germany, instead of the radial engines of local manufacturing, the creation of high-performance interceptors followed two different concepts: Italians just modified already existing fighters to install the new engine, whereas the Japanese started a special programme of design that aimed to obtain the best possible fighter within its type and that was divided in two different parts.

The first one was to obtain a ‘heavy fighter’. To the Japanese of the time that meant a European designed fighter with a small wingspan, high wing loading, armoured plates, self-sealing tanks and heavy armament. The result was the Kawasaki Ki.60 that never achieved mass production. The second part sought a multipurpose fighter, a lighter, more acrobatic plane and, basically, easier to be manufactured by the local industry. Out of the two companies that presented similar projects, the Kawasaki option (manufactured as Ki.61) was chosen because this company was also in charge of manufacturing under licence the engine DB 601.

The Nakajima Ki.62, that never reached a prototype stage, was designed in 1941 by a team led by T. Koyama as back-up project in case of Kawasaki fighter was a failure. The numerous problems experienced with the Ha-40 and Ha-140 engines forced the Kawasaki engineers to install the Ha-112-II radial engine in the Ki.100 series. In 1942 the Nakajima team also redesigned the Ki.62 as Ki.63 propelled by one 1,050 hp Mitsubishi Ha-102, or one 1,870 hp Nakajima Ha-103, or one 2,200 hp Nakajima Ha-107 air-cooled radial engines, or one 1,900 hp Nakajima Ha-39, or one 2,600 hp Mitsubishi Ha-203 liquid-cooled in-line engines. This new fighter served as a transition design between the Ki.43 Hayabusa and the Ki.84 Hayate. The latest was in fact an over dimensioned Ki.63 with a wider wing chord, deeper fuselage and scaled-up tail surfaces.

Surprisingly, both the Italian and the Japanese systems produced formidable interceptors.