Not a secret project, so I am posting it here, but only a few hundred Mk 102 two-tube automatic 5-inch rocket launchers were made and used exclusively on the Landing Ship Medium (Rocket) 401 and 501 class of vessels. Here is a neat video showing the Mk 102 launcher in action during testing.

Here, too, are a couple of photos of LSMR craft showing their very unusual layout. Some of these vessels remained in service as late at the Vietnam war to provide devastating fire support from rivers, deltas and canals. 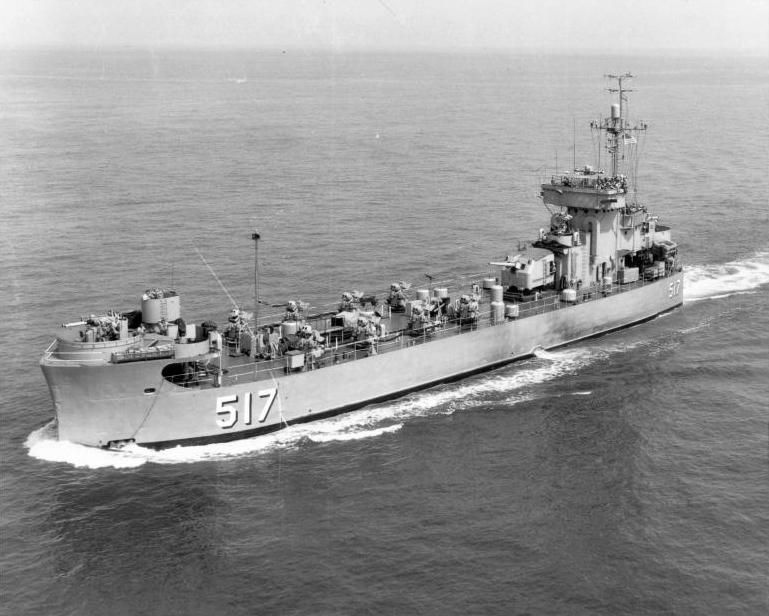 It's interesting to think how a modern system along these lines, but with guided rockets with a variety of warheads and guidance systems for different ranges and targets, could provide enormous firepower from a relatively small vessel.
R

Was this automatic rocket launcher ever fired in anger?

Yes, a quick search shows that while it is not clear the LSM(R)-401 and -501 class vessels actually saw combat in WWII (the earlier -188 class with simpler rocket launchers definitely did) the -401 and -501 class vessels with the Mk 102 two-tube automatic launchers definitely saw combat in Korea and Vietnam. For example, here are two medal citations to the commander and crew of LSM(R)-401 Big Black River, which I believe would have been the first vessel fitted with the Mk 102 launchers.

Entry: 91062
LSMR-401 SILVER STAR MEDAL
T.E. MOORE wrote on April 27, 2015
City and State:
Unit:
Service or Relationship: OTHER
Comments: LCDR. Melvin E. Bustard, Jr., USN, O-127951, Commander, LMSR Division - 32, attached to Destroyer Division - 132 : From the President of the United States for conspicuous gallantry and intrepidity in action as Naval light forces participating in the engagement on 17, July 1951, and approximately fifty shore batteries subjecting the limited operation area of the friendly forces to intense crossfire from three directions. His zealous engaging the enemy in fierce combat coupled with his superb display of seamanship and professional ability, was instrumental in silencing several shore batteries whose fire was intense and accurate over a four and one half hour period. His utter disregard for his own personal safety in maneuvering his ships into position for close fire support with the units under heavy fire, coupled with forceful judgment in subjecting his ships to possible injury in order that our forces could remain in Wonsan, was an inspiration to those who served under him. His leadership, coolness in the face of tremendous odds and zealous devotion to duty reflect the highest credit upon himself and the United States Naval Service.
General Orders : Commander 7th. Fleet : Serial 1795 (November 5, 1951)
Keywords: Korean War --- LSMR Division - 32 --- Destroyer Division - 132 --- Wonsan, Korea --- 17, July
1951 --- LCDR. Melvin E. Bustard,Jr., USN --- President of the United States --- Commander
7th. Fleet.

Aren't Moskva's rockets multi-tube ASW/antitorpedo weapons? The GRAD MRLs on various Soviet/Russian amphibs would be a better comparison, IMO. But the key difference is that an MRL is basically a one-shot salvo weapon while the Mk 102 is a magazine-fed launcher for sustained fire.

The Mk 102 is basically a 40mm Bofors carriage stripped down and heavily modified for firing rockets.

There was also a more advanced Mk 105 launcher made just for USS Carronade, which upped the RoF by about 50%.

Did you watch the video? The one's you're thinking of are upfront in front of the bridge. There's another one (can't find the video at the moment) that looks like a little R2-D2 with a short barrel on it that (appeared) to be launching rockets. Like a mini-Alpha. Might have been on Kuznetsov.

Did you watch the video? The one's you're thinking of are upfront in front of the bridge. There's another one (can't find the video at the moment) that looks like a little R2-D2 with a short barrel on it that (appeared) to be launching rockets. Like a mini-Alpha. Might have been on Kuznetsov.
Click to expand...