Metoděj Vlach was Czech pioneer aviator and aircraft designer. He was the man who first flew a Czech original design aeroplane with a Czech engine.

He was born on 6 July 1887 at Říkovice near Přerov (Bohemia). After studying at secondary school he went to Maribor, to a train manufacturing company for and then to Puch. In 1908 he was employed as the main mechanic at the Laurin & Klement company in Mladá Boleslav. Vlach observed the flight of Otto Hieronymus who was also employed by the same firm. He also represented theLaurin & Klement as a car racer in Austro-Hungary and France.

Vlach then built the model of biplane of 3.0 metres span. In Mladá Boleslav he knew another Czech aviator, Ing. Jan Kašpar, who in 1909 worked at the company Laurin & Klement. Metoděj Vlach converted the racing car Laurin & Klement Type L car for use in an aircraft.

In 1909 he started to build his first biplane (No.1) fitted with a ski landing gear. But with an underpowered engine the biplane could not even move, let alone take off. Later he installed a more powerful 4-cylinder engine, but the aeroplane still would not take-off and eventually the airframe failed and collapsed.

Design No.2 was the repaired No.1 biplane with a more powerful Laurin & Klement type L (38 hp) motor. The biplane also received a new undercarriage with the main wheels in front and two small in rear part of fuselage.

In the spring of 1911 Vlach built the new biplane No.3 with the same engine as the Vlach No.2. This type achieved flights of around 10 metres in length. It was a completely wooden monoplane with a span of 10 metres. The propeller was two metres long.

M. Vlach started already in 1911 to build fully new No.4 aircraft. Together with assistance from colleagues, Vítek and Ševit, the new monoplane was finished in summer 1912 and was exhibited at the Mladoboleslavská Severočeská Výstava (Northern Czech Mlada Boleslav exposition) and was awarded a gold medal. The aircraft had wing warping controls. The first flight was on November 8, 1912. The first public flight produced a flight of nearly 500 metres in length at an altitude of about 20 m.

A replica was built by Nadační fond Metoděje Vlacha and flown in 2002 powered by Škoda Favorit 1.4 litre engine.

and here is anther picture to No.4.

I thought that members may like to see the replica which is regularly flown from the museum dedicated to the great man himself. 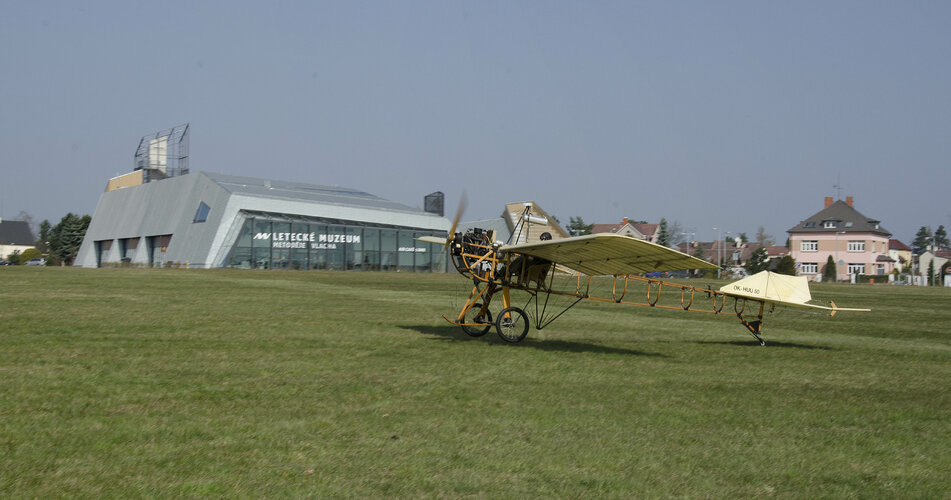