Jemiba said:
The part about the Me 110 with Aurol fuel additives was a secondary theme in this document. It
should give the 110 better climbing speed after dropping the bomb load, but wasn't regarded
as really worthwhile by Willy, because it would need too much Aurol to bring apprecciable
improvements.
Seems to me, that the aim was a Me 109 as a fighter bomber with superior performance, compared to
allied aircraft, as it is mentioned explicitely, that ".. for such an aircraft even climbing speed and ceiling
after dropping the bombload would be sufficient, if armament would be reduced.
It should get smaller wings and jettisonable wheels for taxying, for landing it would have an retractable
skid. As the next step, even smaller wings are mentioned, necessitating, that the aircraft would be launched
via a catapult and "landed" via a big (!) parachute. Those modifications were regarded as necessary, to provide
"at least a small number" of aircraft, highly superior to the allies.
Click to expand...

I do not read German. But based on the translation, I think GTX is correct. This sounds just like the Hu136. It is hard to see how anything remotely related to a Bf109 could have these characteristics.
Click to expand...

As far as we know, Messerschmitt had no involvement with the Hü 136. As I've mentioned elsewhere, there were certainly numerous project designs which simply have not survived to the present day and this would appear to be one of them. To take one example, four different layouts were considered by Focke-Wulf before the company settled on what became the Fw 159. Presumably back in the early 1930s there were several designs studied before the Bf 109's layout was chosen but as far as I know we're not aware of what they were.

Which translates more or less into: "......... We quickly build a 109 with smaller wings and instead of a wheeled undercarriage we install retractable skis on which it can easily land. Wheels will be attached for take-off and roll. ........"

I don't know whether such 109 with shorter wings and retractable skis was ever built,
but at least one 109 was built and tested with fixed skis.
This photo shows it on a jettisonable wheeled dolly: 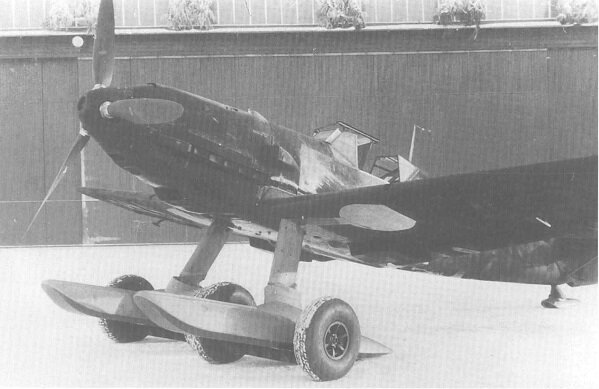 A poorer quality version of this photo can be found on a website which states:
"Me109-E8 On Skis & Also On Temporary Wheeled Dolly For Winter Tests During Winter 1941-1942 But Crashed After 80 Flights & Version Was Not Continued."

Another website shows a different photo of a 109 on skis and states: "......... A Bf 109E-8 was fitted with a pair of faired skis in place of wheels (in actuality, the skies appeared to be more like hollow pontoons) and was flight tested both with the skis alone and using a jettisonable wheeled dolly for assist in take-offs. By the time the tests had been completed, experience by the Luftwaffe in actual winter environments had resulted in minimal difficulties, and as the skied version of the Bf 109E suffered in performance due to the increased drag of the skies and fairings, the project was dropped. ..........." 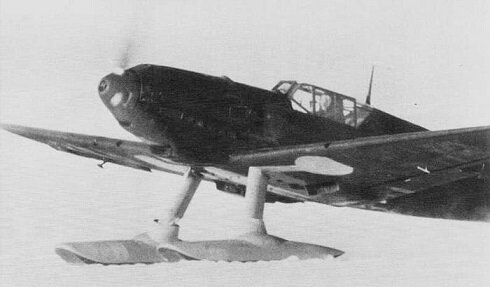 All About Messerschmitt Bf 109

The most detailed information about Messerschmitt Bf 109

zinzinzibidi.com
That such fixed skis increase drag is not surprising.

The wind tunnel model on image Numériser 3 2-1.jpeg above has wings with radiators and skis. Would they have used old 109 wings with skis on a new 209 fuselage for wind tunnel testing? For what purpose? Difficult to believe that they were considering to actually build and operate a 209 or 309 or 262 (Smith & Creek) on fixed skis.
I

Dagger said:
The wind tunnel model on image Numériser 3 2-1.jpeg above has wings with radiators and skis. Would they have used old 109 wings with skis on a new 209 fuselage for wind tunnel testing? For what purpose? Difficult to believe that they were considering to actually build and operate a 209 or 309 or 262 (Smith & Creek) on fixed skis.
Click to expand...

I do not know, of course. But I would guess that, if you had the wind-tunnel data from tests with the models before skis were added, you could determine the aerodynamic effects of adding skis to a known, baseline configuration. Subtract the previously known values from the new test values, and you have wind-tunnel results for the skis themselves.
Share:
Facebook Twitter Reddit Pinterest Tumblr WhatsApp Email Share Link