Over the years the STOVL ability of the Harrier has led to various proposals for ships for it to operate from.

Also shown are 3 concepts for Harrier Carriers from HSA/BAe in mid-1970s. Not serious designs, but show range of possible deck configurations. Perhaps link to Type 43 with ski-jump studies.

BAe in the 1980s proposed the SCADS concept, based on US Arapaho, to base 5 Sea Harriers plus two Sea Kings for convoy escort.

After the idea of SCADS BAe also came up with the SkyHook idea. The initial idea saw BAe propose two ships, one in their patent application (http://www.google.com/patents?vid=USPAT4523729&id=IcEyAAAAEBAJ&pg=PP2&dq=heinz+frick) and one used in publicity brochures. Both relied on SkyHook for take-off and landing, probably not too practical.

However, VT designed a 'proper' ship around the concept and this featured a skeletal ski-jump atop the supersturcture for take-off. This increased payload, with recovery via SkyHook. Aircraft were stowed in a hangar with lateral doors for entry/exit, SkyHook being used to move aircraft to the launch position.

The idea was to use the ship as a 'forward base', allowing greater endurance in CAP patrols, with the aircraft returning to a large carrier for major maintenance. In other words, a naval version of the Harrier's land-based use of forward operating strips.

To illustrate the final point in above post, land based skeletal ski-jump and SkyHook pics. These equate to the VT SkyHook ship with, say, an Invincible-class playing the role of a main base in the maritime role.

This is some great time and research you have put together here ‘Harrier’!
I have found this very interesting
Hats of to you my friend!

If you have more please keep it coming

Skyhook still amazes me. Its just such a strange idea. Similar to the point defense interceptors launching off the back of lorries - i think this was tried with MiG-19 and others...
P

Given that the Harrier is out of production, what size would the ship be to carry and equal number of F35's?

I guess such a ship would need to be a bit larger. However, I would not like to see what happens if the SkyHook 'probe' got into an F-35B lift fan!

One problem I have not seen discussed is what happened if the pilot ejects while hovering near SkyHook. Presumably this was looked into, especially as the inventor was a BAe test pilot.

Afraid that is all I have!
E

That's where the alignment markings for the Skyhook come in. Besides, if you come up with the fan already forward of the latch point, you'll have to bust through the door before you can get to the fan. There are ways of dealing with the problem.

PMN1 said:
Given that the Harrier is out of production, what size would the ship be to carry and equal number of F35's?
Click to expand...

With long inflight endurance and higher availability, would you really need the same number of F-35Bs as compared to Harrier IIs, or even first generation Sea Harriers?

I think that it is siginificant that the RAF has reduced projected squadron size for the JCA from 12 airframe to only 9! Of course, this also means that the peacetime combat airgroup of the 60,000 ton CV-F will only be 9 F-35B aircraft!

I keep thinking of that SCADS design installed on an upgraded container ship derivative of the NS Savannah.
R

Some about the Iowa Harrier Carrier:

I've seen one suggestion to improve the airflow over the flight deck on that configuration by trunking together the funnels as was proposed on the original, unbuilt, South Dakota-class of circa-1920.
F

Wow... Now that would have had a lot of firepower. Ideal to support massive landings.
But of course the design is hideous.
E

"Hideous" is a matter of aesthetics, of course. I find this design more aesthetically pleasing that the one with only a single launch ramp to one side. 'Twould be interesting to see a pair of these operating in conjunction with another pair of Iowa-class ships converted to the amphibious landing support ship configuration studied in the 1950s.
F

Hmmm, do you have info on the latter proposal?

You know, these babies might have been a cheap option for the so called Arsenal ships as proposed by that french engineer René Loire.
Imagine... GPS guided 406mm shells...
E

The amphibious landing support ship conversion of the Iowa-class? I saw the centerline profile of that one in Friedman's book on US Battleships.

I see some people have been busy building 'Harrier Carriers' (well, F-35Bs probably).

But no :'( :'( :'( :'(, Spain is making a new LL (Landing Logistics) but really it´s a LHA. With possible use for some Harrier when the Principe de Asturias will be in dock... but not a raelly aircraft carrier... 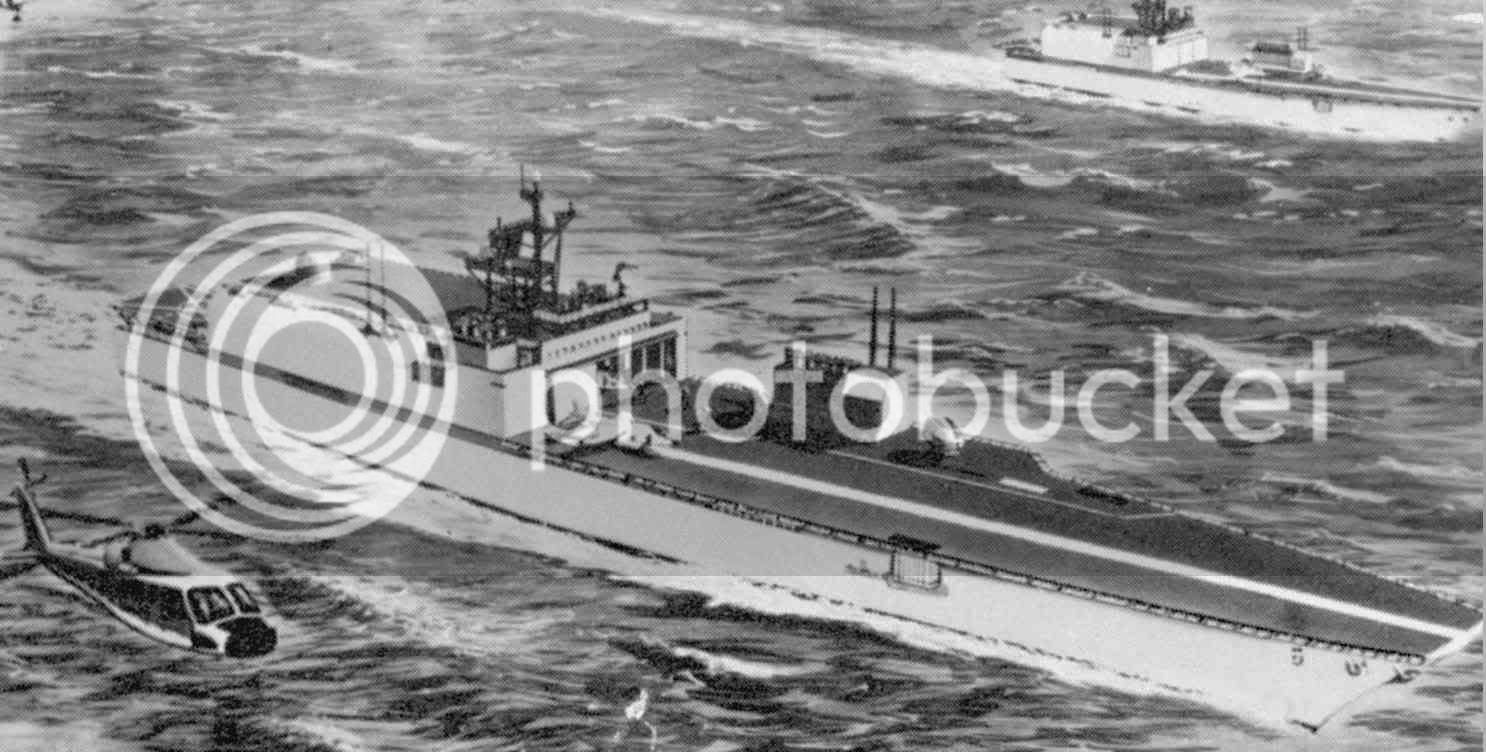 This was a serious proposal?

More info available at http://forum.keypublishing.co.uk/showthread.php?t=59936&page=2, some concepts for very light "Harrier Carriers". The Air Capable Spruance was a serious project. You can find some fine renderings at Shipbucket collection.

Thanks golfus, I remember making a few contributions myself to that forum subject. In fact there are a number of contributors that also used images I had posted....in the 8000t carrier thread.

The first ship ever to be conceived and laid out specially for the Harrier is the 1975/76 project by Vosper Thornycroft Ltd.

Sources please. Some of those look more like fan-art.

From the Hovercraft Museum. I forgot I'd taken some pics there, SES and hovercraft projects next.

'Acquired' from the Aircraft Carriers thread over at whatifmodelers.com (h/t GTX and Mossie). Appears to be a mid-80's VSEL (Vickers Shipbuilding and Engineering Limited) proposal for a submersible carrier, but I haven't been able to track down any hard details.

Note: Black and white drawing from 'The Hybrid Warship'.

Here is an interesting link dealing with "Harrier Carriers". Of particilar note are the Bremer Vulkan proposals. On the link you can read some of their advertising which promotes small carriers in an OPV role. An interesting concept, if probably prohibitively expensive for the Navies it was aimed at:

I honestly wonder how expensive a very austere carrier concept would be-- you're not talking about something dealing with supersonic missiles-- you might be able to get away with a few small caliber autocannons, because it's main purpose is to help patrol helicopters and --maybe-- VTOL aicraft.

When I was listening to some comments about Katrina, I recall a coast guard pilot mentioning the shortage of landing pads and areas where they could refuel and such and I was wondering what a USCG "carrier" woudl look like.

It'd be excellent for disaster relief and wide area patrols, but you'd have to be very draconian when people started talking about making it "just a bit more capable" which has been the deathknell of many a lowcost concept.

You may find the Merchant Aircraft Carriers thread of interest then, if you haven't come across it already.
T

Hey Gang
Interesting comments Bgray and nice link GreyHavoc!
The concept of an OPV ACcarrier is extremely interesting but as pointed out above is very susceptable to escalating costs and increasing exponentially into something totaly different.
My interest stemed from the fact that the Irish Naval Service had ceased Helicopter operations due to the fact that Helicopters when used for long range patrols, as opposed to traditional asw work, were deemed inoerable once the Sea State nudged past 5. Something which happens daily in the North Atlantic. At or above Sea tate 5 it was found that the ship pitch and roll would be such that the Helicopter would have to be land based, negating any advantage in basing it aboard ship. The only alternative was a landing pad significantly larger then those which occupy the rear quarter of a ship....as is the case in most Navies.
In that context an OPV carrier might actually work. They are relatively cheap and with multiple medium helicopters can cover many multiples of EEZ with only a handfully of helis and a single hull.
However, as with alot of ideas that work in theory....there are drawbacks. For the knid of Navies that are aimed at, such as those that primarily do OPV work they are probably a step too far. For larger Navies, its probably cheaper to build multiple conventional OPVs and deploy Frigates in support. And for Navies that operate Carriers they are useless as they are single roled (more or less) and very under armed.

From the Hovercraft Museum. I forgot I'd taken some pics there, SES and hovercraft projects next.
Click to expand...


It is any connection with the Italian Garibaldi?
Since the two ship share more elements and the general architecture of both is quite similiar.

The first ship ever to be conceived and laid out specially for the Harrier is the 1975/76 project by Vosper Thornycroft Ltd.

A new design proposed by Vosper Thornycroft, in conjunction with the
Hawker Siddeley Aviation Company, is for a completely new type of warship:
a vessel of frigate size (6,000 tons) with a carrier deck capable
of launching either eight Sea Harrier VSTOL (vertical short take-off and
landing) aircraft, or eight Sea King antisubmarine helicopters, or any
mix totaling eight aircraft. The ship is, in essence, a small version
of the Invincible, and for that reason may bring the cost within reach
of many navies that could not otherwise afford the larger vessel.
The following Table gives the principal data about the proposed vessel,
which is called a Harrier Carrier:
Click to expand...