There is also a mystery Fokker design,the D-24 fighter.

Not to be confused with the Fokker D-24 Alliance V.S.T.O.L fighter.

Jos Heyman said:
D22 was a version of the D21 with a retractable undecarriage. It was not built.
Click to expand...

Who is right? Or what's the difference between D.XXII and D.XXIV? ???

redstar72 said:
Who is right? Or what's the difference between D.XXII and D.XXIV? ???
Click to expand...

Now you've got me thinking...I've had that note about the D.XXIV in my files for a long time, but now I can't find the original source or any proof that it is correct.

The D.XXI was designed to the order of the Royal Dutch East Indies Army.
Engineer in charge was Dr.Schatzki.He was aware that modern fighter aircraft
of the time were designed as all-metal,low wing aircraft with retractable undercarriages.
However,Fokker could not afford, with it's own resources, of switching over the factory
from welded steeltube ,wood and linen construction to the new all metal methods.
The D.XXI was therefore constructed according to the old Fokker recipe.
Welded steel tube covered with linen for the fuselage and tailplane and a wooden wing.

Not to be confused with the Fokker D-24 Alliance V.S.T.O.L fighter.

mz said:
So, any reason why Fokker was so left behind? The D.XXI was their best fielded fighter and it had fixed undercarriage. Was it because of lack of aluminium expertise, so they built wood- and fabric planes which didn't work well at high speeds? No advanced glues or Mosquito style mold built sandwich structures yet available at that point?
Click to expand...

The initial customer (Dutch East Indies airforce, KNIL) specified the fixed undercarriage for the D-21. Fokker wanted to use retractable main gear instead.
Their best fielded fighter was the G-1, and it was pretty good. Just not available in sufficient numbers.

Fokker depended on domestic military orders, and those were few and far between in the 1930s. This meant little money for development.

They did lack aluminium expertise, were caught out in the civilian market by the DC-2 (Fokker introduced the wooden F-34 in the same timeframe). According to one book (the graphic novel 'Gefluister aan de horizon' [Whisperings at the horizon]), Anthony Fokker believed in the superiority of his wood/fabric/spaceframe construction until it was too late and KLM decided to buy the DC-2 instead of the F-34.


"...and FR-107, powered by a Twin Wasp and with a retractable undercarriage, achieved extremely competitive figures..."

Thanks a lot,
Carlos.

Where does this D-24 idea come from? Reference source please. As far as I am concerned this looks suspiciously like the D-21.
Also the designation D-24 is usually connected to the post war VTO fighter developed in cooperation with Republic but not built.
L

Perhaps these two discussions should be merged.
Is it possible to scan the relevant quotes from each of those references and post them here.
J

I posed the matter of the D-XXIV to the Nederlandseluchtvaart.nl forum and received a satisfactory reply from 'michelboons1974' who referred to Gerdessen, Nederlandse Militaire Luchtvaart, a Dutch language article.
Basically the D-XXII was considered end 1937 with either a radial engine or a line engine. These were designs 150 and 151.
In September 1939 a two seater was considered as Design 197 with a 425 hp Wright Whirlwind. It was intended as a competitor to the Koolhoven FK-56.
On 19 June 1939 Fokker introduced a D-XXI version with a retractable undecarriage and a Bristol Perseus engine. Three days later it was referred to as D-XXIV.

In the new Dutch book 'Fokker D.21-Fokkers laatste eenmotorige jager'
'Fokker D.21 Fokker's last single engined fighter'
by Peter de Jong-Lanasta 2012 , the author writes that the D.22 designation was not
offical used by Fokker.
He mentions a military document-Oct.1937- that among the new Fokker projects an interceptor
was with a planned speed of 520 km/h. In a document four month later this design is labelled 'D.22'
but the designation was not used by Fokker,although it is clear that reference was made
to the designs (ontwerpen) 150 and 151 who were on the drawing board in September 1937.

So far . page 83 from the above mentioned book published by
Lanasta -Violaero in the same series as the excellent Fokker G.1 book.
J

The first one of the Finnish modifications for retracts was a failure: the mechanism was slow and unreliable, and performance improvements were not realised. The second one (built from the beginning) was a success: the mechanism actually worked and the aircraft gained more speed, and both climbed and dived better. On that one, one pair of machineguns was moved from wings to fuselage, which pilots considered a great improvement - although they thought that replacing the 4 light machine guns with 2 x 12.7 mm ones in fuselage would have been ideal. Unfortunately, there was no time or resources for converting more Fokkers.

source: Jukka Raunio: Valtion Lentokonetehtaan historia. Osa 2: Tampereella ja sodissa 1933-1944 (A history of VL in Tampere and during the war)

Don't forget the Finnish winter mod to use skis: 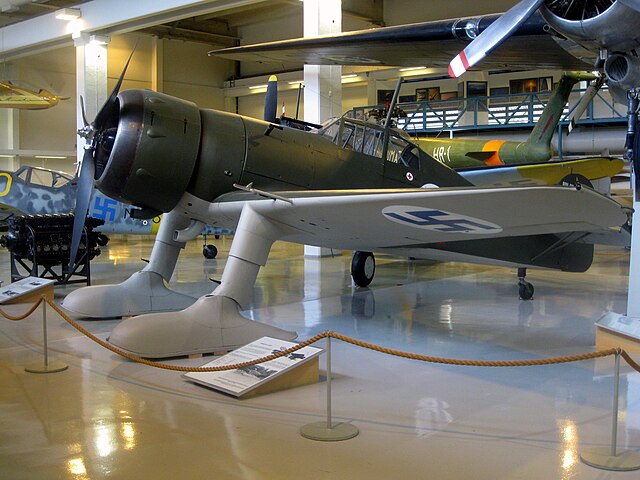 
has anyone a drawing to Fokker D.XXII single seat fighter with retractable landing
gear project,which developed from D.XXI ?.
L

Thank you my dear Lark.
J

Two Finish D-21 were fixed, experimentaly with retractable landing gear.
I found a detail picture of this.
Who can help me with more details of this system?
Was this an excisting one coming from an other type of aeroplane, and if so from which one?
Thanks
Jan

Those bulges in the leading edges reminded me of the MS.406, which was used in Finland, too.
But in the "Mörko Morani" they were used for the weapons only, I think, where as the photos
(http://www.ww2aircraft.net/forum/attachments/aircraft-requests/63297d1299782268t-fokker-xxi-retractable-carriage-clipboard02.jpg,
http://www.ww2aircraft.net/forum/attachments/aircraft-requests/63294d1299782268t-fokker-xxi-retractable-carriage-clipboard01.jpg)
show, that they contained parts of the retraction mechanism.
J

Thanks, but that is all what I also found
J

Thanks for the information/materials.
Maybe its possible that they designed a new system or the modified the Caudron C-714 landinggear system.
Enclosed some, bad, drawings.
Opinion please??

Dear friends,
I read about a Fokker D.XXI modified by spanish republican forces with a Shvetstov M-25 engine: have you more info about that?
According to the book "Aircraft of the Spanish Civil War - Gerald Howson", it was tested by Mario Palacios in the presence of the Gen Emilio Herrera.
Thanks a lot.
P.S. Merry Christmas to all!
--
Lucamax
R

Those clever Finns managed to install retractable undercarriage while retaining 90 percent of the original wing including the original main spar. The swept, inboard leading edge and underwing bulges are the only aerodynamic modifications.

lucamax said:
Dear friends,
I read about a Fokker D.XXI modified by spanish republican forces with a Shvetstov M-25 engine: have you more info about that?
According to the book "Aircraft of the Spanish Civil War - Gerald Howson", it was tested by Mario Palacios in the presence of the Gen Emilio Herrera.
Thanks a lot.
P.S. Merry Christmas to all!
--
Lucamax
Click to expand...

The Shvetsov M-25 was a licence-built Wright R-1820 Cyclone. The Spanish Hispano-Suiza plant also had a licence to build R-1820s as the H-S 9V.

I have had a look at the appropriate chapter in Fokker D.21 - Fokkers laatste eenmotorige jager by Peter de Jong, Violaero 2012. This is what I found.

In 1937, Fokker and the Spanish Republic had arranged for licence-production in Spain of 25 C.10 scouts and 50 D.21 fighters. Fokker's head office in Amsterdam had made drawings for an R-1820-powered D.21 as part of this deal, presumably because of the availability of licence-built R-1820s. Peter de Jong writes that the single Spanish D.21 was probably assembled from locally made parts, so this was not a matter of an existing aircraft modified to accept the R-1820. It was a new build R-1820-/M-25-powered aircraft, with drawings supplied by Fokker.

The Spanish Fokkers were to be built in the Hispano-Suiza factory in Guadalajara, near Madrid. However, with the Civil War breaking out, the Spanish Republic moved all of Hispano-Suiza's and AISA's work force and machinery to La Rabasa airfield near Alicante. Both companies were nationalised in June 1937, with AISA becoming SAF-1 and H-S becoming SAF-5 - SAF being the Spanish acronym for Aeronautical Maintenance and Production Facility. The two facilities were then merged into SAF-15, under commandante Andrés Pitarch. The same facility also made Polikarpov I-16s, production of which took precedence over the Fokkers. At some time in 1937, La Rabasa was bombed by the Nationalists. Damage was more psychological than physical, but it was decided anyway to move production to the surrounding villages. The D.21 found a home in the Monasterio de la Santa Faz, which had been cleared of its population by the Republic - it had a problematic relation with the Spanish Roman Catholic Church which tended to side with the Nationalists.
De Jong writes the Spanish D.21s were to use Soviet equipment: four 7.62mm ShKAS machine guns and a Shvetsov M-25. De Jong writes it is unclear which engine was fitted in the D.21 when it rolled out of the monastry in August 1938: M-25 or R-1820. Test flights were conducted in October 1938, from Los Alcazáres-El Carmoli airfield. The pilot was Mariano Palacios Palomar, chief-instructor of the airfield's flying school. The aircraft carried the registration CF-001.

i have seen that wikipedia talk also about an order of 25 fokker c.x , 25 fokker G.I and 50 fokker G.XXI https://it.wikipedia.org/wiki/Fokker_C.X