Justo, If you're in the market ... http://www.aerocarforsale.com/ ;D

Apophenia said:
Justo, If you're in the market ... http://www.aerocarforsale.com/ ;D
Click to expand...

Here you are the fathers

Why no flying cars?

Had we all learned "the language of the future" then that future would be here by now!

Why no flying cars?

Had we all learned "the language of the future" then that future would be here by now!

You are right
Babyboomers have not met general expectations...

"Where did it go wrong?"

Don't really know if it's wrong, that not every boor can buzz over my head !
And at least todays legislation would be the nd of this kind of transport.
Nevertheless, here's another design from times, when flying cars seemed to be
around the corner, this time from William Horton :
(from Der Flieger, 1958)

Messerschmitt "Kabinenroller" (after WW2 they had to build "This" to survive) 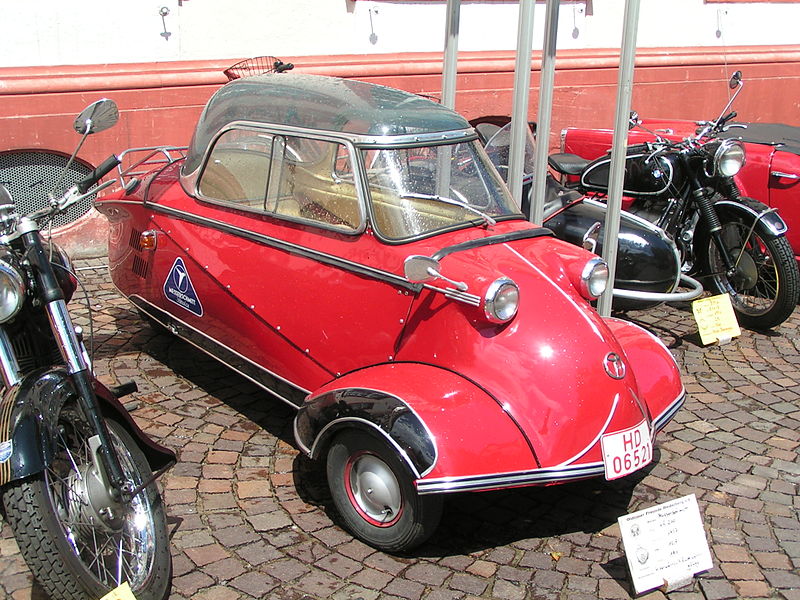 It's the difference between things that fly, and things that don't fly but have to ride out a pothole at 70 mph and protect their occupants against a drunk in a Ford F350. A Cirrus SR22 has about the same cab volume as a 5-series BMW or similar, but has an empty weight of about 2200 pounds versus 3500-plus pounds for the car.
And given that nobody has come up with a really successful amphibious car yet (pace all you Amphicar fans out there) asking for a flying car may be ambitious.
J

LowObservable said:
asking for a flying car may be ambitious.
Click to expand...

A new "flying car", the CellCraft. Powered by front and rear turbines driving ducted fans through a transmission. Pictures are from the following website:
http://www.newlaunches.com/archives/cellcraft_g440_the_newest_concept_in_flying_cars.php

You can read more about it here:
http://www.gizio.it/

Other ideas without practical sense:
The Aviauto, designed by de la Fourniere. The car is a removable gondola
of a twin engined light aircraft. Even in the magazine, where I've found
this drawing, the question was raised, if using a conventional light transport
like the Miles Aerovan wouldn't be a more practical solution ... :

the Austaircar was twin boom roadable aircraft project of 1949,it was
powered by two 215 hp Franklin engines,driving a pusher propeller.

has a V-tail ... interesting

What do you think of this?

not only Messerschmitt build something "roadable"
also Heinkel

"not only Messerschmitt build something "roadable"
also Heinkel .."

From U.Kubisch "MotorROLLERMobil"":
Dornier Delta from 1955. Perhaps inspired by the well known Dornier push-pull
engine arrangement ?
But building motorcycles and cars was just a way to keep these companies alive,
as developing aircraft still was forbidden.
And no words against the Heinkel Kabinenroller, my dad still remembers a tour in it from
Frankfurt/Main to Berlin during the fifties. It probably was comparable to a tour of
several thousand kilometers in a modern car ...

Impressive summary of flying car development, half of which i hadn't even heard of! Once again i find the forum proves an encyclopaedic source of knowledge. Anyway, I would add the Pitcairn PA-36 autogyro of the late thirties to this list.

Gyroplanes are a very attractive way of looking at the problem, and an almost practical one. Since the rotor is unpowered and the rotor is always autorotating, engine failures are less of a problem. Top speeds are limited to more or less 100-120 kts. Oh, and if it's a three-wheeler, it can use the car pool lane

From U Dub's Aeronautical Laboratory in Seattle.
http://www.uwal.org/multimedia/historical.htm

The 'car' section and wings on this wind tunnel look about right. But the rear section is totally different from the final, cone-shaped fuselage.

There exists a book in French dedicated to the subject history.

The author is the director of Maison d'Ailleurs, a Swiss foundation / museum dedicated to the history of science-fiction. Their collections are no counterpart in the world and they often work as an image agency.

Not really a car, but a tracked vehicle, not civil, but military, looking not very realistic,
but the patent with the number DE 44 29 993 A1 was filed for this idea. The inventor
was Dr. Hans Krech, who intended to use two RR Pegasus 103 and the wing of the F-14
for this VTOL capable, lightly armoured troop carrier, armed with a 30mm gun, a co-axial
7,62mm MG and air-to-air and air-to-ground missiles.
The inventor wanted only UN-peacekeeping forces to be armed with this jack-of-all-trades ...
(from Flieger-Kalender 1997)

And some more:
From "Weltluftfahrt" November 1950 a design by Karl Stöckel for
a supersonic flying car, taking off as a helicopter with a tip jet
driven rotor, which can be locked to act as a conventional wing.
Forward thrust comes from a rear mounted jet engine.

And from "Weltluftfahrt" March 1951 a design to show that there's no
need to use a car, because a motorbike is absolutely suffient. A glider,
which is built around a vespa-like motobike, to make the glider self-deployable.
Note, that this design was realised and used for several years, as is stated
by the author !

I want a flying car !
For avoid the traffic ! ;D

This one here could be of interest for you. Foldable four bladed
rotor, a shrouded tail rotor and quite a pleasing design, I think.
Designated as "Ka-2" in "Weltluftfahrt" 12/1950, I couldn't find
the designer, someone, who can ?
BTW, if you aren't the only one to have such a vehicle, the traffic
would only be transfered into the air ... :-\

Ah, thank you richard,
have read again the article in the 1950 issue, the designer isn't mentioned explicitely,
but the author is Günther C. Kampf and the title is "Ein deutscher Vorschlag" (a german
proposal) and he says that "this design" was meant to adress the shortcomings of the
relatively succesful Pitcairn Autogiro Co. PA-36 Whirlwind.
Seems to have been a very modest gentleman !

Okay. The "Ka" part sounded like something from Kamov. :
G

This recent Boeing design reminds me of the "Ka 2" posted earlier.

"Okay. The "Ka" part sounded like something from Kamov"

Flying around in such a thing wouldn't have been politically correct
for communists/socialists, I think .

Jemiba said:
"Okay. The "Ka" part sounded like something from Kamov"

Flying around in such a thing wouldn't have been politically correct
for communists/socialists, I think .
Click to expand...

Yeah, it was kinda dumb for me to think it was Kamov.
J

In case any of you are interested, the current issue of the Robb report has a Molt Taylor Aerocar for sale for around $3mil. As I understood the ad, the vehicle is roadable, but not flyable.

NASA has been working on SLJ's for a while and figuring out how to make them in such a way that pilots can get "a license in a day." They are going about this by making the plane very similar to a car. This is first done by eliminating all of the internal cables in the aircraft and making it sensor based. Normally, banking left means pulling back while turning left. They are working on making it so that turning a steering wheel in the plane to the left means that the plane automatically does everything to make the plane stay at the same altitude and essentially turn left, like a car. Also, the rudder pedals would be replaced by acceleration and brake pedals. When pressing them, the plane would do the necessary adjustments to speed the plane up or slow it down. A technology that has been in development for a while is automatic landing systems. NASA has been advancing this technology by creating air "streets", paths that a pilot can choose from for landing. After picking a landing strip, the plane takes over, but leaves control to the pilot if he/she wants it back. They are also working on air "highways." Your plane has a programmed route to get to a destination. If another plane is in the way of that destination, the plane communicates with the other plane and plans an alternate route, then asks the pilot to accept the route change.